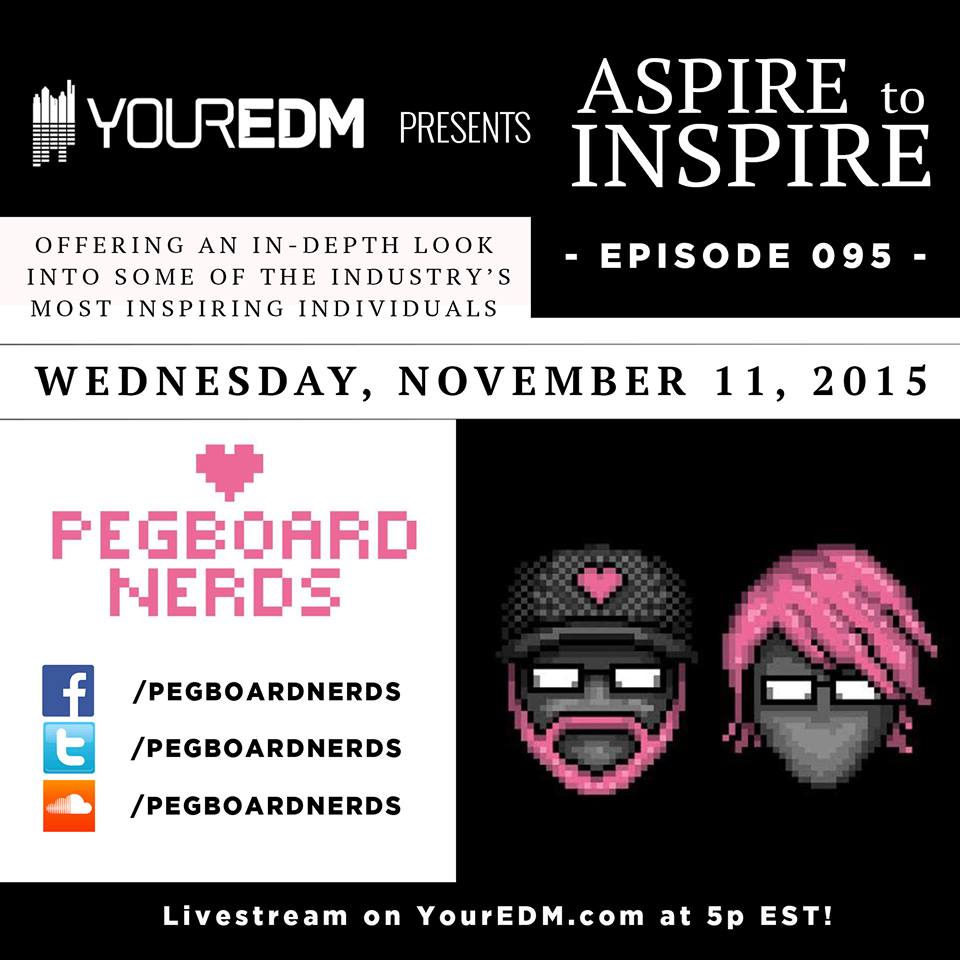 Many young EDM advocates are so amped about the world of music around them in this era that they may get lost in the stream of current trends and can’t see with open eyes.  Electronic music has come a long ways in the past few years and is much more diverse than any other music genre to date.  It can be so complicated for anyone to wrap their brains around the concept of why music developed to what it is today, and to even recognize how innovative people had to be in the early 90s to even record sounds and produce music.

Pegboard Nerds play an extremely engaging role in our electronic music history.  This dynamic duo has seen and experienced just about everything.  Since they have stuck around so long, this purely shows that they are in this industry for the love and passion of the craft.  Michael Parsberg and Alex Odden, the Pegboard Nerds, have a very interesting and lengthy history when it comes to music—it is a real eye opener.

Alex and Michael are from Scandinavia (or Scandiravia): Alex born in Sarpsborg, Norway and Michael born in Copenhagen, Denmark.  The dark, cold, and rainy weather is a bit of a downside of living in Scandinavia but it is a safe life with little crime and little poverty, but extremely expensive—overall, a fantastic place to grow up.  Alex and Michael both had similar upbringings and interests.  Alex grew up as the oldest of four siblings close to the countryside, which was nothing like a big city.  He was pretty timid and tried playing sports, but would quit six months later because he would rather draw and play Nintendo.  Michael lived a similar, quiet and safe life.  However, he was more into sports and played soccer frequently, and enjoyed studying.

The two got into music as teenagers.  Michael took an interest in his sister’s classic, mid 80s pop and hip hop vinyl music collection at age 13.  He loved it so much that he acquired a paper route so that he could finally purchase his first synthesizer.  Alex got into music through something called the “Demo Scene,” which is basically a computer party where one plays games and makes music.  Alex reminisces and says that it is a very special atmosphere and still attends an annual party called the “Gathering,” which is held on a Viking ship, to learn how to make music.

Back in the late 80s and early 90s, music was a lot more difficult to learn since there weren’t YouTube tutorials or Massive sound patches you could download; music took time.

Alex and Michael’s story of meeting each other and collaborating is nothing short of amazing, as well as compelling.  Back in 2004, Alex won an Above & Beyond remix competition.  Michael was so impressed with the remix that he found out Alex’s information and sent him an email, which led them to communicating on a regular basis in 2005.  For years, the two collaborated on a lot of music and original productions as well as ghost produced for other artists.  Nothing that came out was officially under their names.  In 2011, the two finally discussed the future of their collaborations and ultimately decided to start putting compositions out under their own name.

Therefore, Pegboard Nerds was born in 2012.  Amusing enough, their name came from a name anagram machine from the Internet, which compiled their two last names—Parsberg and Odden—into one and it came out as Pegboard Nerds.  From the get go, they were a big hit in the bass music scene with their eclectic video game-based sounds mixed in with the perfect amount of wobble, whomps, and bangs.  In the last several years, these video game inspired sounds have separated them from the rest of the crowd—giving them a signature sound.

The Nerds believe they make the perfect DJ/producer combination.  Michael explains, “Alex is so good at creating melodies and I am not.  So, it makes no sense for me to do that.  I am a better DJ so no discussion on that part.  If there is something we disagree on, it is…do we get Greygoose Pear or Patron?” Alex agrees, “There is a good kind of synergy.  We don’t disagree a lot.  Sometimes I don’t know what sounds good or what sounds really shitty, which is crystal clear to Michael.  He has a fresh pair of ears and gives constructive feedback.”  Endearingly, throughout the entire interview, the duo complimented each other endlessly while recognizing each other’s opportunities for growth.

In short, Alex is the better producer and Michael is the better DJ, which is quite common with electronic music duos.  When it comes to their live performances, they use CDJs because of their long history with electronic music.  “Playing records is a part of us.  It took a long time to go from vinyl to CDJs.  It is easier to be a good DJ…it is about song choice and playing the right song at the right time.  A really good DJ knows what to play next – playing the right tracks that are unheard of,” Michael points out.  Humorously enough, the Pegboard Nerds have 4 CDJs when they play live even though they don’t actually use all four of them.  “We use it as an emergency button,” Michael laughs.  Alex loves to headbang so much that it has completely stopped tracks in the middle of a set.  It is better to be safe than sorry, right?

Over the past few years the Nerds say their lives have been nothing short of amazing.  They both say they can’t believe how much they travel and how many great places they get to visit.  But, at the same time it is a curse.  Michael states, “… [We] play fun gigs… then, shit, we have to be at the airport in 2 hours!”  Meaning, the traveling is great but fun times do come to an end where they have to pick up their feet and drag themselves to the airport for the next gig.

The Pegboard Nerds’ “fame” is something that comes along with the package, but it isn’t something that they personally seek out.  But, in return truly amazing circumstances come from it.  A month ago, in Spain, a fan tweeted at them and said they spotted Mike and Alex while they were eating.  All of a sudden 50 fans were standing next to them; greeting them, giving hugs, and words of thanks while two girls were so excited they were crying.  Alex states, “It was really special.”  Michael admits, “It is not the fact that we want to become famous but it is like ‘holy shit!’”

When it comes to what inspires them they both agree that music is their main inspiration.  Music is the reason that made Michael reach out to Alex in 2004 in admiration, which ignited their creative friendship.  “Once you do music every day for many years it becomes a part of your conscience.  Your brain tries to fill in what you are hearing and once you harness that you can use it to come up with your own idea,” Alex says.  “It is what we live for.  New things and new technologies… we are nerds,” Michael exclaims.

At the end of the day, the Nerds have an immense amount of love and appreciation for their craft and what they have chosen to do for a living.  The time, the dedication, and their passion oozes from the music that they create, just for the sake of it.  It is safe to say that music can be compared to fine wine—it gets better with age.  The Pegboard Nerds won’t be stopping anytime soon and it’ll be interesting to see what adventures are in store for them.