Just when you thought Soundcloud couldn’t get any worse, they strike again harder than ever. Now reaching an all time low, Soundcloud has removed a track that is nothing but 4 minutes of pure silence due to “Copyright Infringement” claims.

That’s right, a song that has literally no sound was flagged for removal. How? Because Soundcloud is lazy and takes shortcuts to flag and remove content.

Instead of crawling the uploaded content for copyright material, which takes a decent amount of CPU power, Soundcloud has resorted into cutting that process out entirely and beginning to flag content based on JUST the track title.

The title of the track that D.J. Detweiler used is in his upload, John Cage – 4’33, is actually the name of a popular orchestral performance that consists of exactly 4 minutes and 33 seconds of silence. For the past 60 years, musicians have argued over the conundrum of copyrighting “just silence”, since it consists of no actual sounds. In fact, the “performance” itself cannot be replicated as the sounds of the piece are supplied by the uncomfortable shifting and natural sounds of the audience and venue. Today, the world agrees that the unique case of filing copyright claims on John Cage’s – 4’33 is a complete joke and does not hold up in a court of law.

D.J. Detweiler’s troll of the copyright system ironically exposed the shortcuts Soundcloud is taking to remove content. Crawling the uploaded content is an essential process to validating copyright claims, but also costs a good amount of money to run.

Instead of paying to help keep musician’s music protected from false copyright claims, Soundcloud took the easy way out and will remove your music just based on the title of the track. Soundcloud has finally turned its back on protecting their content creators in favor of saving a few extra bucks, and absolving themselves of liability at the hands of the major labels. 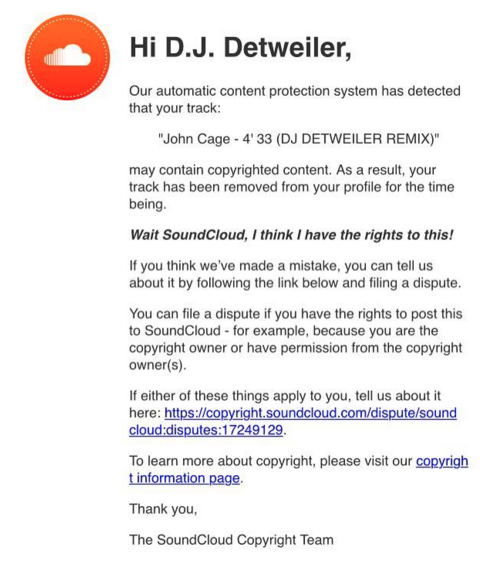 The questions that this case brings up are plenty. Since the judicial system, and even the lawyers involved in the case of Mike Batt v. estate of John Cage, found the copyright claim incredulous, the fact that Soundcloud has resorted to a takedown is even more laughable.

It’s the inevitable conclusion that a company growing as large as Soundcloud would need to take greater care in legal matters, but in doing so, it has become a completely different service.