Beatport has just come out with its cavalcade of Top Lists for 2015, truly providing everything you need to catch up on this year’s tracks, albums, sound packs and more.

First, the Beatport gang put together the Top Selling Tracks, dividing them up into categories by genre. This year, the Progressive House category was topped by Tiësto and Martin Garrix‘s original track, “The Only Way Is Up.” Blasterjaxx, Eric Prydz, Ummet Ozcan and Hardwell all made it into the list’s top 5, with Garrix and Prydz each securing a second track in the eighth and ninth spots, respectively. 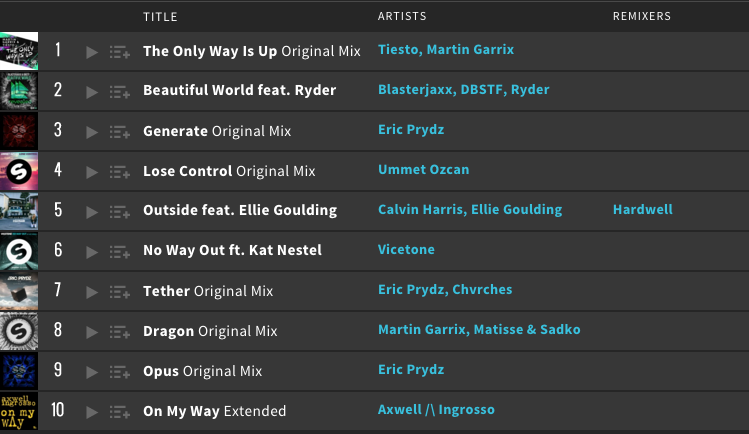 Hardwell’s remix of Calvin Harris and Ellie Goulding’s “Outside” made it to #5, while Vicetone’s “No Way Out” with Kat Nestel came in sixth place.

The lists are picked using trends, data and a measure of curation – which means while they’re probably some of the most popular tracks in the respective genre, some of them might be picked for the perceived quality too. Best Albums covers work from all across the dance music spectrum. Skuls, What So Not, EPROM, PC Music, Armin van Buuren and Lapalux all make an appearance.

The staff’s favorite sound packs and compilations are also included, giving users a more varied list of material to browse.

Head over to the site now and see what you missed during the last 12 months.