Hey everyone, and welcome to this week’s West Coast Wednesday artist spotlight feature. Today we’re featuring a very eye opening interview I had with Onhell, a rapidly rising star in the west coast bass scene. We’ve also got an exclusive free download for you from the man himself so don’t forget to grab that below as well!

Now, I’ve known about Onhell pretty much since I started getting into this kind of music, but it wasn’t until this past summer that I really got to see him in action. This summer, it seemed like the Humboldt-born, Oakland-based producer was playing at every west coast festival I was attending. This was because in truth, he pretty much was, and here’s why:

After moving from Humboldt to Oakland’s massive artistic community, Onhell’s sound went Super Saiyan 2 in a matter of months, and I was witnessing the results of this with my very own eyes that following summer.

Since then, it’s been nothing but a wild ride of uniquely glorious tunes and equally amazing shows for our young hero, culminating in a nationwide tour with Sayer that not only garnered them tons of new fans, but also produced some of the dankest flyer memes known to man.

It’s for these reasons among many that I was so excited to sit down with Onhell to pick his brain about all kinds of things, and it was indeed, a fantastic experience. If you fancy yourself a fan of bass music, make sure you put this guy on your radar if you haven’t already. Enjoy our in depth look into the world of Onhell!

Tell us about how you got started in the bass music scene.

“Well a couple of things did. Seeing the Glitch Mob perform at 17, listening to Skream and Benga, and following all the post dubstep internet labels like Astro Nautico and Brainfeeder. But the number 1 thing was my friends and all the dope producers that live on the west coat. Moving to the Bay Area opened my eyes to what is possible and made me up my production game, big time.”

Care to expand a little more upon what that move did for your music?

“Sure. Moving out of Humboldt to the bay changed my music hobby into a career. It’s simple really, there just aren’t enough people that live in Humboldt to facilitate a true music career. In Oakland/The Bay Area there are promoters, producers, djs, blog writers, and everyone from the music industry right there at the same show you’re attending or playing at. So naturally, if you’re good at what you do, you’ll get where you need to be. This is exactly what happened to me. You meet people and move up. Humboldt is too much of a bubble. And don’t get me wrong, it’s the best bubble that exists on this planet, but it’s a bubble nonetheless. I have two lovers right now, Humboldt and The Bay Area. I am in both often.”

Who were some of your biggest infulences when you began and who are some now?

“Radiohead was definitely the spark that got me interested in electronic music. But then it just progressed from there. In the beginning it was definitely on the Skream, Benga, and all the random internet producers tip. Now my top five are probably: Mount Kimbie, Kanye West, Shlohmo, Drake, and last but not least, all my homie producers that influence the fuck out of me. I feel like the west coast scene really wants everyone to succeed and move up. We are all in it together, and it feels like family. I love it.”

Tell us a little bit about your latest EP, “Darkness”.

“This EP was hard for me to get out there because i feel like it’s not what people expected of me. Lately I’ve been releasing bangers and this release was the opposite of that. I didn’t want to disappoint people with mellow sad songs, but I’m more than happy with the response it’s been getting. It’s also very personal to me. I tend to put too much of myself in my music and makes it hard to finish songs, but making this release really helped me get through a lot of things.”

Who are some of the people you hope to collaborate with in the future?

“I really just want to collaborate with all the homie producers. It’s not like an unlikely goal, it’s just something I’m super stoked on. I’m just hella inspired by all the dudes around california/west coast/the internet that have been killing it. That being said, I would really love to collaborate with more musicians. I would like to get to a point where I was performing my music with a band that included a drummer and vocalist and other musicians. I am really inspired by James Blake’s live band.”

Do you prefer to use samples or create things from scratch?

“I mostly create everything from scratch. I have a Korg MS2000, a Moog Sub Phatty, and a Mopho. It’s easier for me to get out what’s in my head with hands on a keyboard than experimenting with samples, but I do sample a lot of motown acapellas. I’ve also been singing more too, so expect that in more tunes.”

What are some of your favorite VSTs (Plugins)?

“I mostly use my hardware synths, but if I’m on the road or I just want to use something different, I use Massive. I try to use every one of my synths in my songs. I find that diversity is super key to make a track sound complete and not stale.”

How long do you usually like to spend on a track?

“It really depends. Some people say the layout of your track should be done within a day or even a couple hours. I completely disagree. Sometime I finish a track in a day, sometime i finish a track in a month. I find that if it’s frustrating me, I tend to move onto something else, and go back to it later. One of the songs on my ‘Darkness’ release was 3 or more years old and another was 2 weeks old.”

Anything you can tell us about your upcoming projects?

“I have a collaborative EP coming out with my homie Jolly Jeff. I made the beats. He’s singing and rapping on it. Hypha and I are always making more tunes together, so expect more from us. Other than that, I have no new tracks, which feels amazing. I’m definitely planning on starting with fresh ideas and making the best tunes. The dopest is yet to come.”

How did the recent tour with Sayer go?

“Oh the tour was crazy. 40 days of traveling all over the US. I’m honestly exhausted and ready to play some contra on my nintendo. It definitely challenged me on what i could accomplish in my professional, musical, and personal life. Highlights: girl falling onto the dj table and almost breaking it in half, almost selling out the venue we played in Humboldt (my home), and becoming friends with Sayer.”

“Don’t do a 40 day tour (laughs). Just kidding, I would say buy a car port charger for your computer, and learn how to use photoshop to make memes for each show. That really made people know we were on tour.” 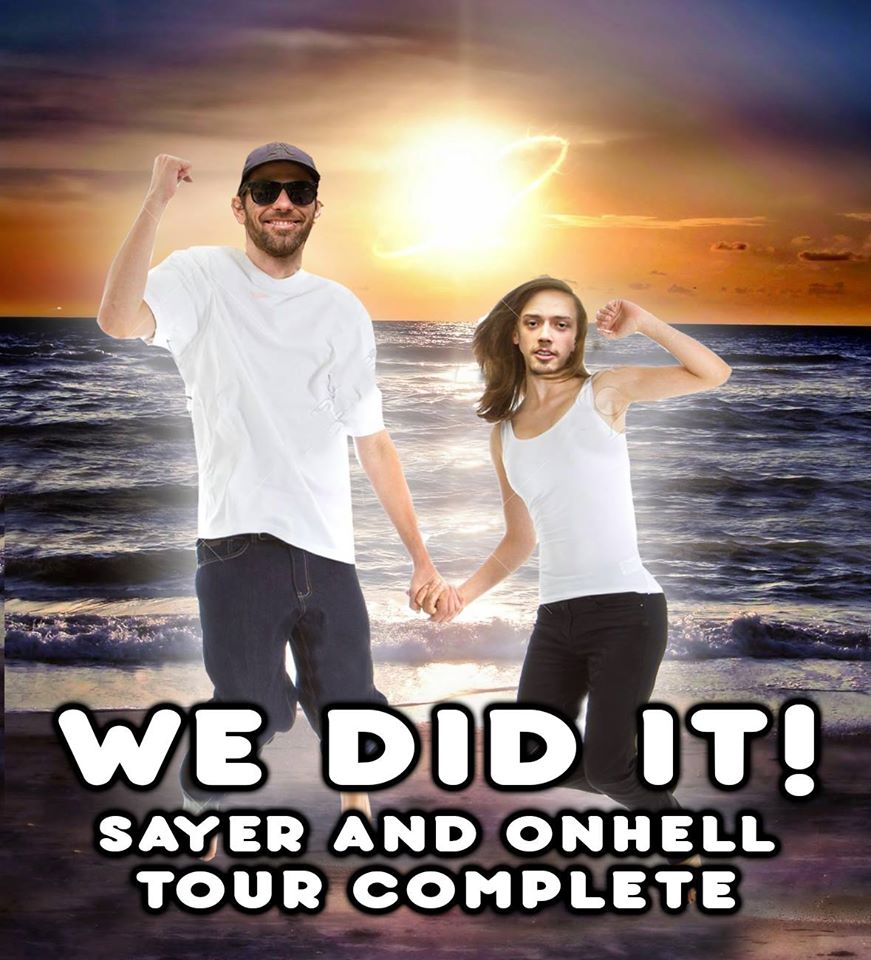