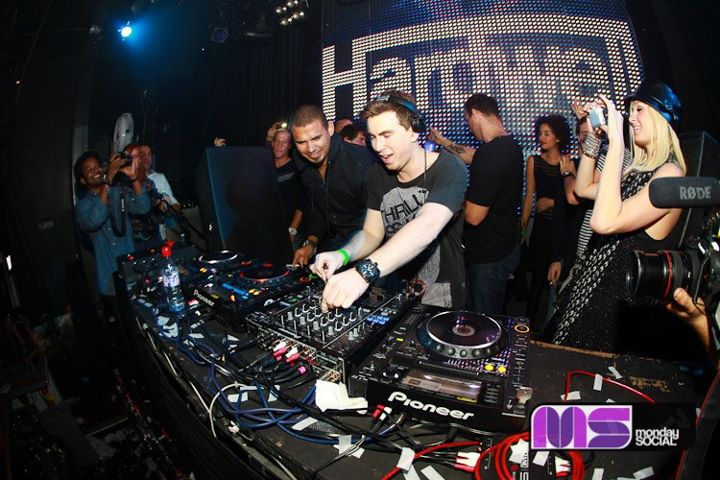 Hardwell And Afrojack Toss Up A Morsel Of A Collab

Hardwell and Afrojack. Both are Dutch, both get paid well into the millions, and both get to live lavish lives traveling around the globe and partying all the while. The two artists are actually quite comparable in a lot of ways, making a collaboration between them a complete no-brainer. It’s been a while since they worked together on 2008’s “Let The Attack Begin,” and the two have finally gotten around to a follow-up collab. Titled “Hollywood,” Hardwell debuted their combined effort earlier this year at the Netherlands’ The Flying Dutchman.

Now, we’ve finally been offered an official sampling of “Hollywood,” but we were hoping for something a bit more outrageous and refreshing – like a mojito and bruschetta on a midsummer’s eve. But instead we’ve been offered a beer and peanuts. Like beer and peanuts, it’s still a good track, just not the concoction we hoped for, and that’s certainly our fault for holding them to such a standard. After all, music is expression, and who are we to judge someone’s creative endeavor.

At 1:24 minutes long, it’s a tasteful selection of their upcoming release, including all the sections fans want to hear. There’s a melodic introduction that echoes amongst a subtle kick, a catchy hands-in-the-air buildup that you can play air keyboard to, and then a bombastic breakdown sporting a horde of bursting of lasers. It’s a good track! It fits right in with the ever popular trend of progressively inspired electro house. It’s exactly what mainstage gate-rats feed on. And it’s exactly what you’d expect from Hardwell and Afrojack… which isn’t a good thing.

At one point, the two were exceedingly innovative and created a genre defining sound out of their explorations. However, it seems now they’ve reached the top, and stayed there, that they’re content to follow the same safe formula for successful music. We’re not saying that “Hollywood” is bad, and we’re not bashing Hardwell or Afrojack as producers, simply hoping that as leaders of the genre, they can rediscover that spark which earned them a spot in our hearts in the first place. For context, below is their collab from 2008. While by today’s standards “Let The Attack Begin” is not altogether incredible, this track was hype back then.