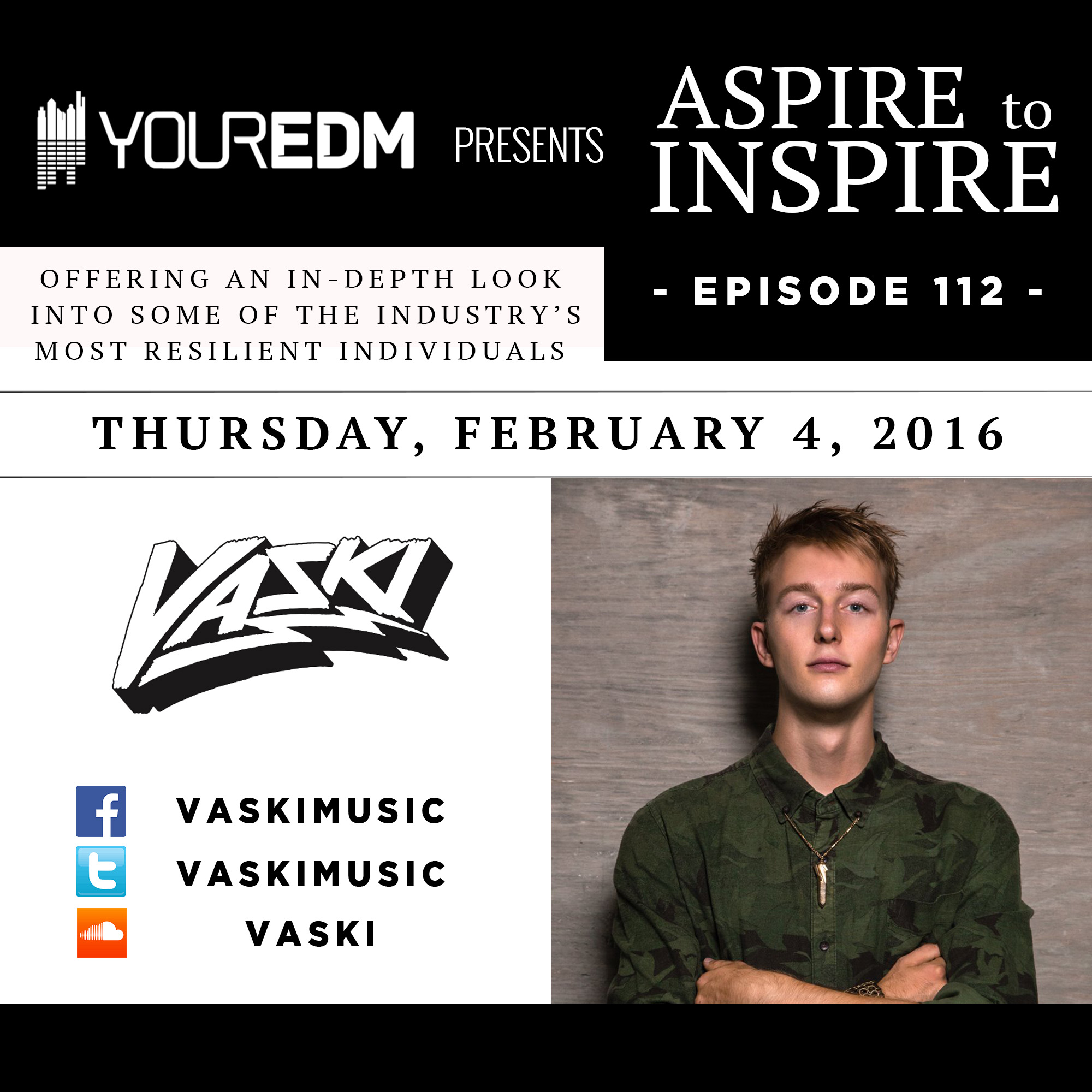 We live in an age of political correctness.  Everyone is expected to keep up some cultivated image smile for the cameras, and always put his/her best foot forward.  However, whether it’s musicians, politicians, or pro athletes, many times perception is not the same as reality.  We want our stars to have big personalities, to be leaders, but not everyone is like that.  Just because someone loves what they do, doesn’t mean they have to party and Snapchat/Instagram the whole thing.  Such is the case with one Alex Presley, better known as L.A.-based producer/DJ, Vaski.

Hailing from Minneapolis, Vaski first hit the scene back in 2009.  His earlier tracks are familiar sounding dubstep and bass-driven tunes.  However, over the past year or so his style has shifted quite drastically.  Newer tracks like “Lazer Love” with KSHMR and “Willy Wonka” have a much more sleek, ethereal, and futuristic sound to them.   According to Vaski this is the natural evolution of any artist – to want to make different songs and styles, to continue to evolve, and to not stay the same over a prolonged period of time.

“People always say ‘stay true to yourself’, but what happens when you change?  Going from being 18 and making songs on a shitty computer in Minneapolis, Minnesota to being 22 and people throwing money at you to perform, traveling all over the world is a MAJOR change.  I think people who don’t change their style are the ones who’ve sold out.  As you get older you get smarter and you see that nothing in life is constant.  If you are only doing something to please others, I think it gets stagnant and ceases to become real art.  It blows my mind that people seem to want the same thing over and over again.  I can’t and won’t deliver that. I don’t care about good business practice or good brand management, I care about pushing the envelope, and making the dopest sounds possible.”

Oh yeah, that other part about brand management. Electronic music, perhaps more than any other genre, is viewed (for better or worse) as “party music”.  Many people have this image of a “stereotypical DJ” as a party animal who stays up all night and is the life of the party by sheer virtue of their charisma or looks, and not necessarily talent.  Again, the perception is often times far from reality.  Many of your favorite DJs have their quirks and Vaski is no different.  In fact, Vaski has made it known that he is an introvert.  Once he gained success and fame, he felt that people expected him to be a party animal and emit this sort of celebrity aura.  That left him feeling uncomfortable, but he never lost sight of his unique contribution to music and the world in general.

“I love writing music.  In touring I immediately felt that people expected more of me than I had to give. I am not the life of the party.  I am not anything like Motley Crue.  I don’t want to talk to everyone in the room or get drunk every night.  I don’t always want to go to your house, I don’t know you.  Because of all the people and the expectations in the scene I felt like I was failing, like I was doing something wrong.  I wasn’t what people expected me to be, and from their perspective, it was often in a disappointing way.  It took me a long time to realize… there was absolutely nothing wrong with me.  I was pressured into being something that I will never be. Maybe it’s something carried down from guitar rock stars, but people assume touring musicians are extroverted party animals.  Sorry to burst your bubble, but I’m not. I’m introverted, and I constantly feel I’m supposed to be extroverted.”

“Through this experience I’m sure I’ve come off as weird, pretentious, lame, boring, etc.  But now that I’ve seen a lot more of the world, I understand that that’s a terrible attitude to go through life with.  Everyone is different and people are rarely what they seem to be on the surface.  This can be applied to anyone, seriously anyone. This is part of the human experience.  We all want to feel appreciated and understood.  Every single person in his/her own way needs to feel that.  Some people express themselves socially; they are really fun to be around and great at parties.  I, and other artists of all kinds, show myself through my work. When other people get down to it that is the fucking best feeling in the entire world.  Everyone has some kind of contribution to give to the world, and we all express it in different ways.”

With time comes clarity, wisdom, and a better understanding of who you are as a person.  In a world full of expectations, Vaski dismisses them.  Vaski knows who he is and after several years in the game, he knows that the path to true happiness is being oneself, even if he’s rubbed some people the wrong way over the years and it might have cost him.  Regardless, he maintains his unique individuality.  Although it’s difficult for him, he knows he has to open up sometimes in his role as a performer.  However, his message remains the same, DO YOU!

“I deal with it by not showing my true self.  I can’t handle it.  I’m not bred to be an over-sharer.  Some people love it and some people don’t.  There’s no right or wrong way.  However, in some industries it’s much better to take one side.  I’m so much happier when I don’t try to be something I’m not.  Would I be more successful if I pushed at that harder?  Absolutely 100%, but at what cost? I don’t want to and am not willing to lose who I am.  It’s hard for me to open up. I don’t like to show who I really am.  All this stuff I’m sharing, I’m doing this because I hope that some people read this and think, ‘wow I feel like that sometimes, I thought I was the only one.’ It’s so important to realize we are not alone -even if we may feel like it! It’s also important to realize that you are YOU, and no one can tell you who that is.  You have to find your own identity in yourself and just unashamedly roll with it.”

That is some advice we should all take to heart.  Value your individuality and who you are.  Do what makes you happy. There is no right or wrong way to achieve your dreams and desires.  Ask that special person out, dab on some fools if you score a touchdown, vote for the candidate you believe in, whatever it is, shoot your shot, and don’t let anyone tell you otherwise.  Aspire to Inspire.