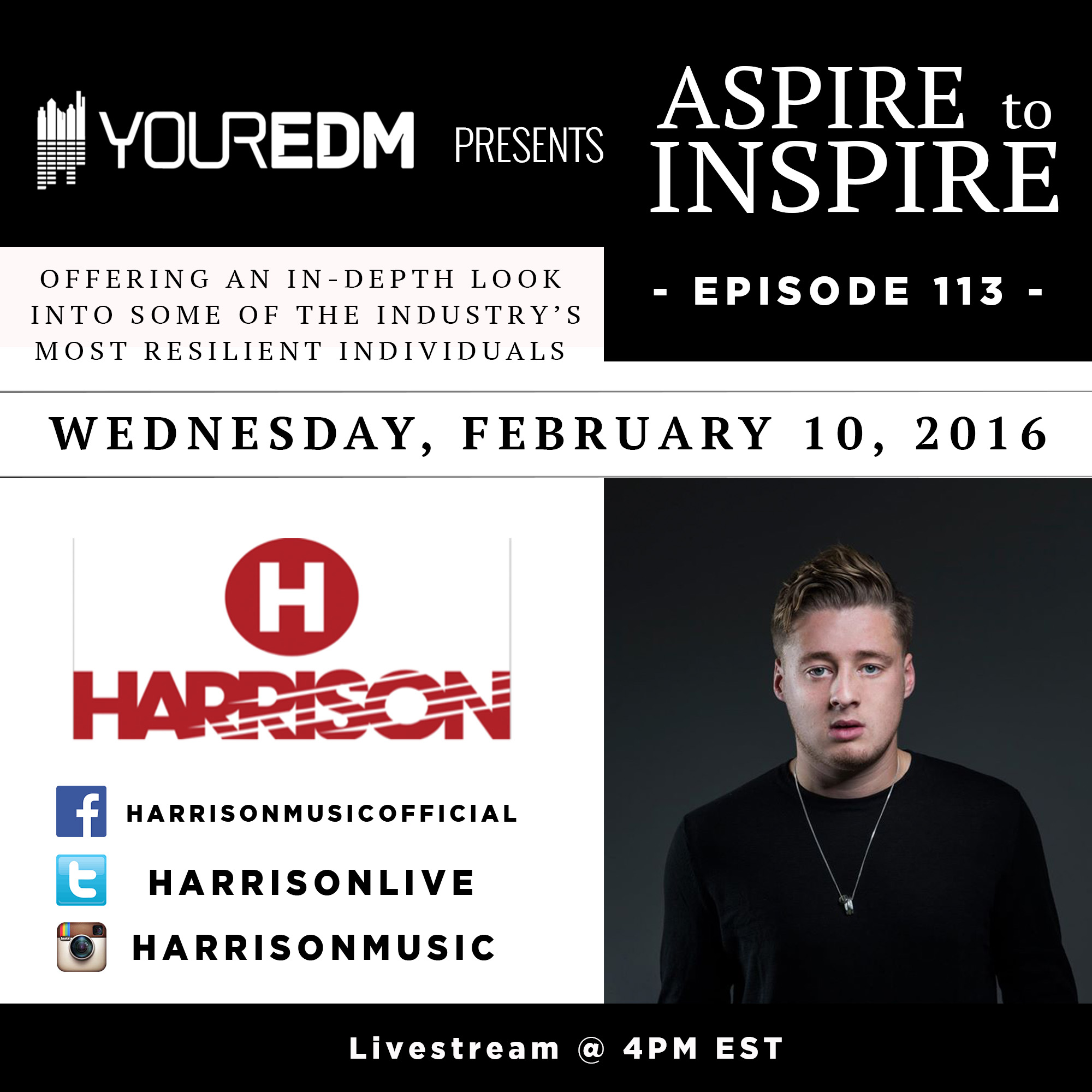 Does lightning strike the same spot twice? When things don’t go according to plan, is the universe trying to tell us to give up? These days there are so many things that can go wrong when we are trying to achieve our dreams. When those things happen, we are given a choice to move on to something else or keep pushing. In this week’s episode of Aspire to Inspire, UK-based singer/songwriter/producer, Harrison, takes a moment to share his journey with us and shed some light on what it truly means to get back up one more time.

At a young age, and much like a lot of others in the music industry, Harrison had no intentions of getting into the scene. His grandfather had introduced him to singing, which he loved very much, but he had also encouraged him to get involved in Rugby. Unfortunately, an injury he sustained put him in a very difficult position.

“Unfortunately, one weekend I injured my ankle very badly. I was in the hospital for four-and-a-half months and had to learn to walk again. That was one of the darkest moments of my life. From that point I didn’t really know what was going to happen, whether I was going to carry on playing in the academy that I was in or if I would have to resort to coaching. I never really thought that I’d tour the world as a DJ. It never crossed my mind until I was about 17.”

Even though athletics didn’t quite pan out the way he had hoped, singing and music remained a constant in his life. It wasn’t until he really put himself out there and gave singing a shot that he actually knew he had found a good fit for himself.

“I think it’s very hard to know exactly what you’re going to do unless you get out there and figure out what you’re like as a person. If you live in a sheltered house and you never go outside but you want the world to come to you…well, that’s never going to happen.”

But, as Harrison puts it, it’s never an easy or smooth ride. He faced a great deal of obstacles when it came to getting the wheels turning in his dance music career. He struck major success on his song “Ain’t a Party” with David Guetta, but never quite received the recognition he felt was warranted for the work he put in. For a significant period of time, Harrison felt as though the music industry wasn’t all it was made out to be. However, he took it as a lesson rather than letting it make him think quitting was the answer.

“I felt like I got robbed a little bit because that record was sort of taken from me. I didn’t even get a phone call or an invite to any of the shows in Ibiza or to come on stage or anything. If that had happened to me in 2013 I think my whole career would have accelerated a hell of a lot faster than it actually did. Instead, that record was sort of taken from me. If you go onto Wikipedia you’ll find like ‘everybody’ wrote it, but the truth is that I genuinely wrote it in my studio with nobody else around me. So the first lesson I learned in music was getting kicked down from the pedestal— day one getting my first release and then everyone ignoring my existence. That hurt. It left a sour taste in my mouth, and I’ve always felt scarred from that situation…but I learned from it.”

As big of a lesson this was for Harrison, similar situations continued. From dear friends that had been with him from the start suddenly disappearing from his life and popping up in the studio with other artists, to working with other major artists and landing tracks that didn’t quite get the response he had hoped for, Harrison seemed to experience every major pitfall of the dance music industry in a row. Still, this did not stop him from chasing after what he wanted. After getting some backlash after one of his more controversial hits, his manager gave him the perfect advice to help him move forward.

“For the life of me all I could do was focus on the negative and that’s when I really learned how to block things out. I also learned that people who don’t like you are always going to voice their opinion over the ones that are okay with you. Like if I like a song, I don’t comment that, I just hit the like button. I realize that now, but at the time it was really hard to see. Then my manager at the time came up to me and said sometimes we release songs and the public doesn’t get it at first, but after a while it’s into the system and everybody likes it. It was a massive learning curve for me.”

With all of that being said, Harrison still has some huge aspirations for both the world and the music industry. In terms of his career, he hopes to break the mold of the mainstream DJ and bring more of a live aspect into the show with his own vocals. As he says, there will always be the huge DJs like Dimitri Vegas & Like Mike and VINAI, but he would like to become more of a hybrid that still mixes whilst singing.

From more of a humanitarian perspective, Harrison has some other things in mind.

“I think humans can mess a lot of things up. However, as human beings we can communicate and we have a voice, so if I could change one thing in the world, I would like to save more of the African animals that I met this year. I went to a lion sanctuary called Lowry Park and went into a cage with a wild lion and she was fully-grown. Beautiful cat. I just sat there with her and thought that it was the most special thing in the world. And then you hear really horrible things like what happened to Cecil the Lion. There are lions bred in captivity and then are hunted on the other side of a fence. It can’t escape that 30-mile radius. When I go back this year we have already agreed that I’m donating all of my fees to the Lowry Park Sanctuary so that they can save more felines. One of the greatest stories was about this puma. It had cerebral palsy and would’ve been put down if it weren’t for the sanctuary. It couldn’t walk more than three steps without falling down to the side. It was really sad. They took it out for a walk on the beach when it was younger and the sand allowed him to find balance so they shipped tons of sand to the sanctuary. Now his whole enclosure has sand so he can walk around for the rest of his life.”

Harrison’s experience with some of the major figures in dance music may have influenced this school of thought a bit, but regardless, he would like to lend a hand in making sure that the wildlife of our world is taken care of. In other words, he has found a way outside of music to help those with less of a voice in the best way that he can.