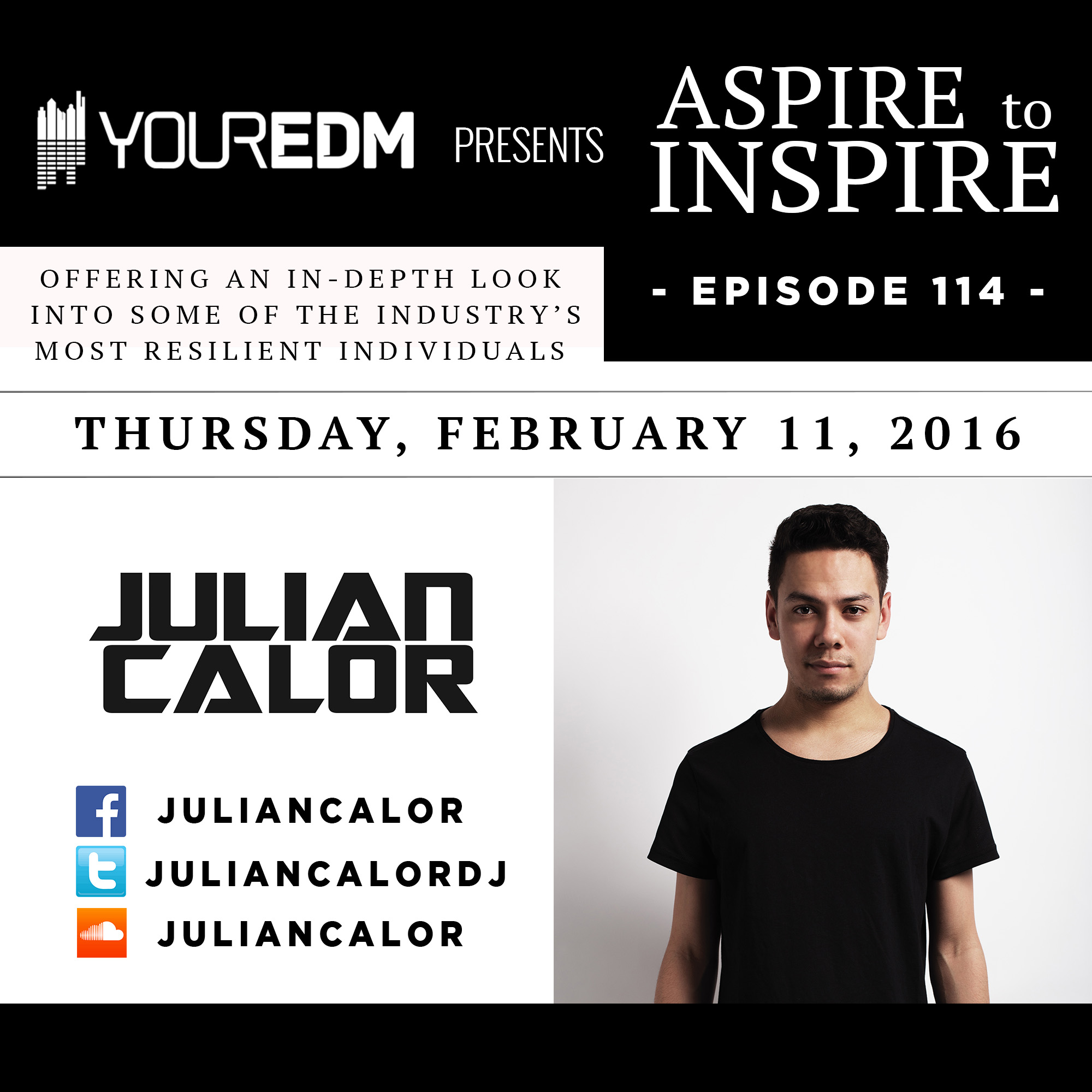 In the early stages of his life, Julian Calor knew that the arts – at some capacity or another – were destined for him. His initial interest in animation filmmaking was short-lived, however, as he quickly turned his focus to computers. After his older brother’s friend downloaded music production software Fruity Loops to their PC one day, he was instantly hooked. Calor’s creative juices started flowing and led him to experimenting day and night with the software. He quickly picked it up and found his true passion. Two years later, he was finally ready to showcase his music to the world. His creations had become a direct reflection of his personality and were inspired by the various genres he listened to in the past. Everyone who listened to his music knew he had a knack for it, further motivating him and in affect pushing his career to new heights.

Music has not only been a boon to Calor’s career, but it has also provided him with an outlet to channel emotions. At the young age of twelve, his parents went through a divorce, proving to be one of the toughest moments in his life. Music became his safeguard, a place where he could forget the world around him and in turn overcome his personal struggle. This therapeutic escape allowed him to pour out his feelings through music and recreate his feelings in the form of notes. Not only did it help calm his mind, but also the music he made became an extension of his body, and a direct reflection of his personality. Slowly, he began to understand the importance of emotions in music and saw his career proliferate because of it. For Calor, it was important to be himself and not conform to others’ demands, especially when it came to producing music.

The release of Calor’s smash hit ‘Typhoon’ prompted frenzy among fans, as they excitedly solicited the Dutch DJ for more of the same. It was his signature sound and people seemed to enjoy it, so Calor obliged and created more “playable” songs like ‘Evolve’ and ‘Cell’. Although this initially worked, he soon felt pigeonholed by making music others wanted. He had forgotten that his success had come from songs he wanted to make and that he felt emotionally, just like when he grew up. He was bored and frustrated with this narrow-minded sound, and lacked any sense of creative direction. So, in the midst of producing ’Evolve’, he decided to go back to his roots, and remove any rules and restrictions on his music. He wanted to start fresh again so that the real Julian Calor could be resurrected. Not only did this experience have a huge impact on that particular track, but also his album as a whole became more experimental. More importantly, he learned that being true to himself was the most important part of his journey.

Through his experiences, Calor learned that music is something that cannot be forced. Instead, it is an organic process in which the mind speaks through sound. He realized that many DJs in the industry were confronted with a similar problem, and many chose to conform to others and not be themselves. Calor believes this has had a ripple effect on the industry as a whole and is a fundamental problem today. Many DJs and producers are in it for the money and forget there is a whole other side to the equation. However, Julian’s focus lies purely in the musical element of the occupation, and he is quickly working towards tackling the accusations that the genre lacks substance.

At a young age, Calor discovered the power of music. It highlighted his creative and artistic abilities, and provided him an outlet where he could turn during hardships. After realizing that he was producing music for the wrong reasons, he went back to the basics and created something that had meaning to him. He began to paint an honest portrait of himself through his music again and saw liberation through creation and inspiration. No matter what it is that you do in life, make sure that it is an authentic representation of your true self.