SoundCloud has been having a rough time of things lately, what with continuing the never-ending battle with copyright infringement and the fight to maintain relevance amongst pressing competition. To enlighten us on their platform’s trajectory, SoundCloud has just released their latest financial filings to depict some telling figures, and the news has brought on further doubt regarding the company’s future viability. Music Business Worldwide broke down the document, boiling the numbers down to some formidable realizations.

Administrative expenses hiked by 67.8% to a whopping $54.06 million, salaries and wages increased by 42.5% to $20.27 million, and employment increased by 21% to include a total of 236 people. Because of SoundCloud’s relatively meager revenue of $15.37 million, these heightened operating costs contributed to a 2014 net loss of $44.19 million. However, the massive imbalance is only a continuation of the company’s history, just look at the graph below. 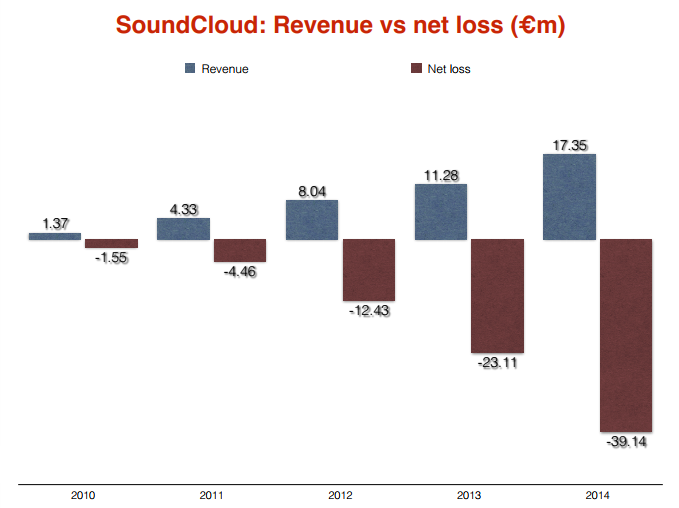 Upon the publishing of these statistics, many publications like Fact Mag took it to mean that Soundcloud could be “forced to close.” These allegations couldn’t be further from the truth.

SoundCloud filed its 2014 accounts with Companies House. Beyond the full-year financials for 2014, which reflect those of a company in a strong growth stage, they show that, in 2015, we secured $77m of incremental capital, some of which came from our existing investors, demonstrating their belief in the future of the company, and the rest of which is a flexible credit line from Tennenbaum Capital Partners, an attractive option for companies like SoundCloud, who have a solid credit rating and are on a clear path to global success.

Since we began, we’ve been building a completely unique platform. SoundCloud users can discover more creators, at all stages of their careers, than anywhere else, and more music and audio: over 18 million creators are using the platform, sharing well over 110 million tracks, and reaching 175 million monthly active listeners. Additionally, comScore recently listed SoundCloud as being the 8th most popular app among millennials based on usage in the US.

Over the past year, we’ve continued to bring partners from the music industry onto SoundCloud. We’ve signed deals with PRS and UMG/UMPG, to add to the nearly 200 deals we’ve already signed, including those with Warner Music, Merlin and NMPA, as well as MCNs and independent creators. We’re focusing on enabling creators to get paid for their creativity, and on building a financially sustainable platform that our community can enjoy for years to come.