by Daniel Cha
in Bass Music, For the lulz, Just For Fun, Misc, Video

FIGHT CLVB has just released a hilarious new video for their track, “Donald Trump,” inspired by the phenomenon that is America’s favorite pariah. The track takes the jungle terror sound to extreme, border-line obnoxious, heights, which was a seemingly intentional move by FIGHT CLVB to poke fun at Trump’s naturally obnoxious demeanor.

The video features a still shot of a small TV in a room, while various animations of Trump play on the screen. The track starts off with some pounding kicks while a simple vocal sample of “Donald fucking Trump” plays out in the background. The drop brings an aggressive chorus of whining synths (something his supporters can undoubtedly relate to), mixed together with other high-pitched sounds. A short interlude gives way to a trap-ish breakdown; it’s sound is reminiscent of Bauer’s infamous hit ‘Harlem Shake’ but with a little more aggression behind it. “Donald Trump” also apparently has some massive remixes in the works from a few of your favorite producers. Keep an eye out for this one, it may end up as viral as the now-infamous Trump Rally Cheerleaders. 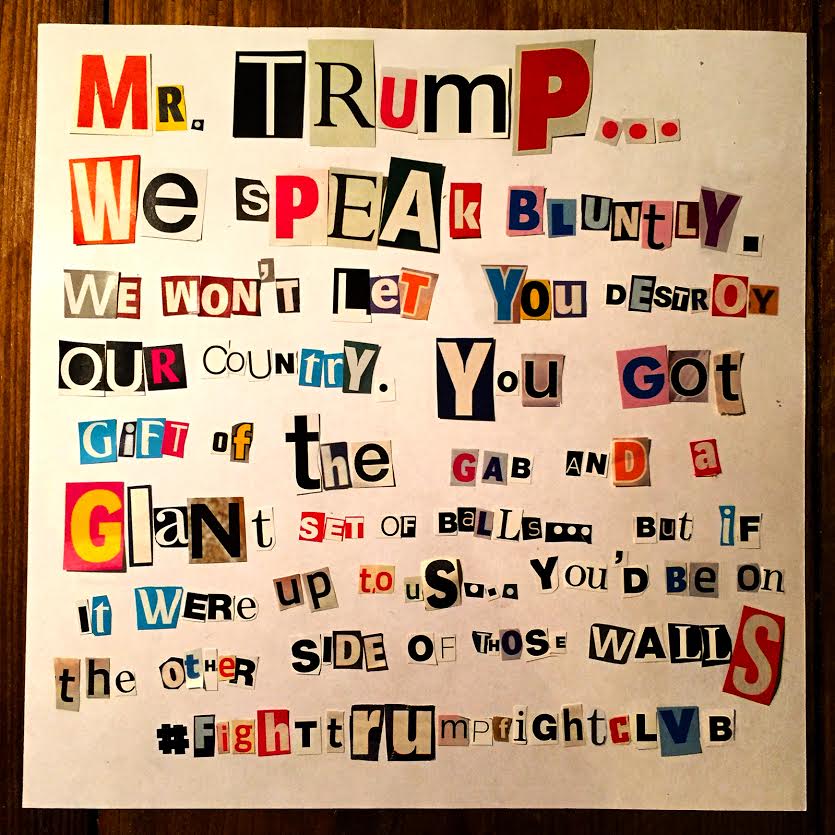 A message from Fight Clvb:

We don’t usually get caught up in politics, but we have a genuine fear for the state of this country if Donald Trump were to get nominated.  One of the things we hold dearest is our love for the dance music culture and the vast abundant different cultures and nationalities that accompany it. There are producers from all over the world making the music and that’s a beautiful thing. Trump seems to be obsessed with this idea that only “real Americans” should be prospering in this country. That is against what we stand for. This country was founded by immigrants (making all of us immigrants) which makes it even harder for us to understand Trump’s ideology. This message of hate, separation, and walls that Trump proliferates will undoubtedly isolate people and create boundaries that will affect everybody including us in our little dance music bubble. Trump doesn’t agree with outsourcing. That would mean no Afrojack, Hardwell, Avicci, Laidback Luke, and all of your other favorite foreign dj/producers being flown down to play festivals in the U.S. You may laugh at where our concerns are at, but if we (the talent of the dance music community) aren’t concerned about these things, then who will be?? We feel it is part of our responsibility as djs/producers with voices to band together through our outlets and do anything in our power to try and stop this atrocity from happening. And we urge other members of our community to do the same. Together, maybe we could make a difference. We hope that this record could help proliferate that message. [sic]

Joyryde Puts The Pedal To The Metal In “Fuel Tank”