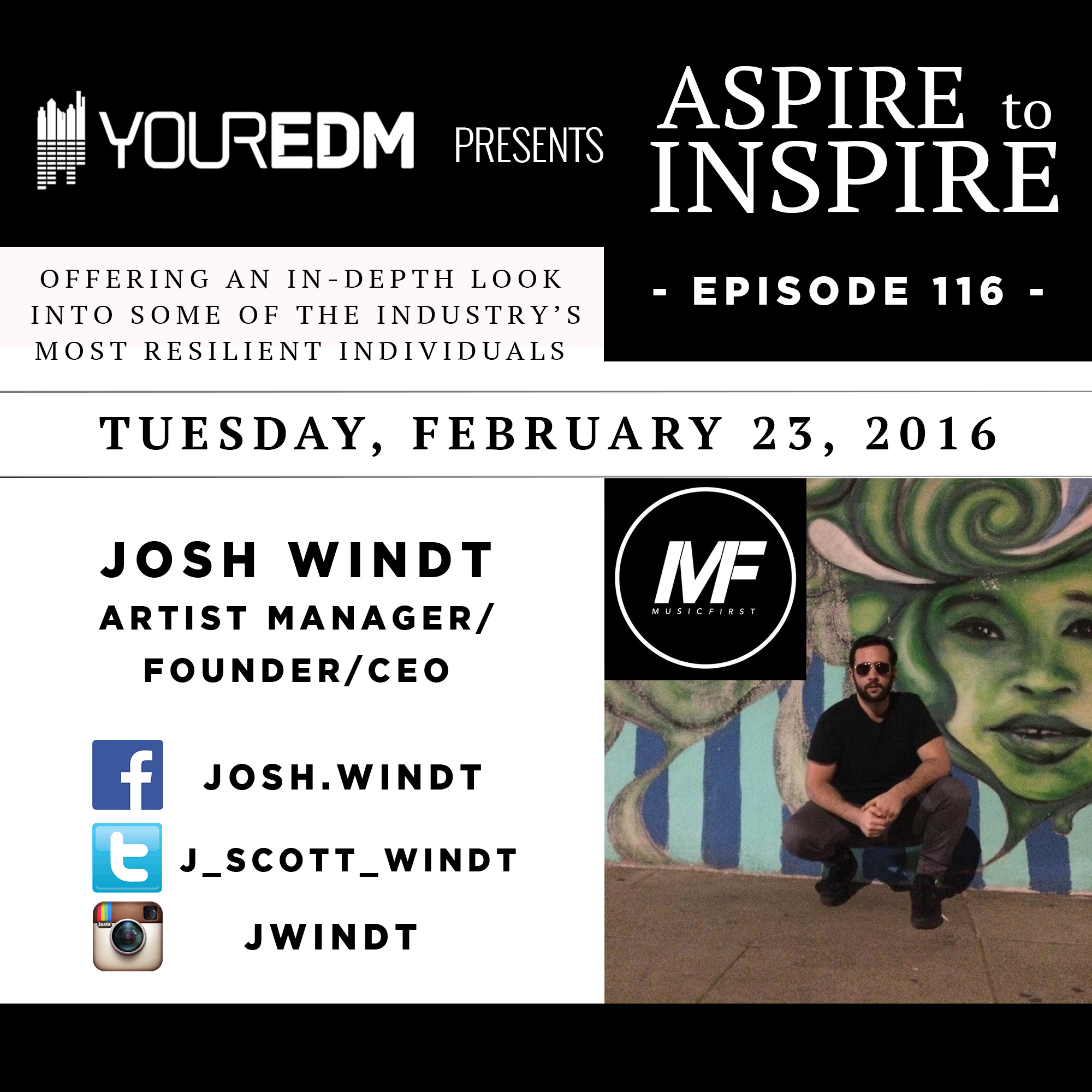 Many young adults are faced with a dilemma once they leave/graduate from college.  Get into the working world, put in time at that 9-5, and climb the ladder into upper management?  Or pursue a career outside of the box, something non-traditional that some people may not approve of.  For artist manager and entrepreneur, Josh Windt, he faced this conundrum head on as he made his way into the working world after college.  Despite landing a job with one of world’s top talent agencies, Josh ultimately knew that the corporate world wasn’t for him.  After leaving a job that most college grads would kill for, Josh now finds himself managing trap/house producer and DJ, Party Thieves as well as runs his own company, Music First. Despite being totally unsure of what he wanted to do after college, Josh considers his four years at Penn State very formative.

“My father wanted me to major in accounting, but I was very against it. I chose finance because it was the hardest major in the business school. I hated it, more than anything in the world. I knew about entrepreneurship and had considered it, but I really wanted to become a sports agent because the show “Arliss”, it seemed exciting, rigorous, and inspiring. College was more than just the classes to me; it was gaining new experiences that opened my eyes to so many things. I studied abroad in Rome and went to all the big shows like Sensation, Tiësto in Amsterdam, Afrojack, Avicii in Barcelona, when they were all creating tons of music. When I returned to Penn State I decided to shoot for a career in music and then my senior year became a part owner of CollegeRehab.com, which is a music blog that started in 2011. After that I started working with some artists (not officially or anything, but just helping them out) and then that has led me to where I am now as Party Thieves’ manager.”

For some of us, we might take a college job working at the grocery store or Starbucks, but Josh wound up working for student travel company, XtremeTrips.  While he was having a great time working for XtremeTrips and honing his business skills, he still kept an eye on being a sports agent and applied at CAA (Creative Artists Agency).  Not only did Josh score an interview, but he also was hired as well.  Despite the prestigious job, Josh knew that this was not the career path for him, so after 10 months he left CAA and returned to XtremeTrips in a more prominent role that set him up for his next career step.

“After my first year, I had re-applied to CAA for a summer internship because our (XtremeTrips) summers are a little bit less hectic since kids aren’t in school. HR emailed me back saying they were not doing a summer internship, and instead had a position that would really suit me – with a female agent in the sports broadcasting/alternative TV department. I stayed there for 10 months but ultimately decided to go a different route. Leaving CAA was one of the hardest decisions I’ve ever had to make, but I know how I am as a person and I felt like I was wasting my creativity sitting behind a desk all day. So after leaving I started what is now my personal LLC, Music First, and went back to Xtreme as the National Director of Sales where I run the Xtreme Trips Music Festival (previously known as Electro Beach) in Puerto Vallarta, Mexico with Prime Social Group.”

While Josh had been building up his brand and making connections through managing tours, he met Party Thieves via a unique social media interaction. They immediately hit it off as they both have a common love for music, business, and entrepreneurship. Josh was amazed by Party Thieves’ drive and acumen, and he remains in awe of the burgeoning artist he now manages.  So much so, he refers to Jared as one of the smartest in the music industry.

“Never in my dreams did I think that I would have landed an artist like Party Thieves.  I started friending people on Facebook because I wanted a bunch of new music in my feed. I saw that Jared (Party Thieves) and I had a lot of mutual friends so I added him.  He’s the only person in my entire life that hit me up immediately afterwards and said, ‘I appreciate the friend request, I accepted it, but who the fuck are you?’ But we kept talking and hit it off! At that point he had like maybe 10,000 fans on Facebook and Soundcloud. A few weeks later he asked if he could stay at my place while he was in New York. I said yes. 1.5 years later he’s not only my artist, but also my best friend. He is one of the smartest guys in the entire music industry; I promise you. He’s so humble. The Party Thieves brand is like a startup company – he is the product, his music is a product, merchandise, shows, etc. and you have to know how to sell it. We have a relationship where we understand each other. I understand his vision and I give him the utmost amount of space to be creative. He is very self sufficient, which is pretty rare for an artist.”

Josh loves what he is doing, but it is work and it is not stress-free.  To this day, he still occasionally wonders, would it just be easier to go work for somewhere else?  Many people don’t ever chase their dreams because they don’t really have the support around them to do that.  Josh cited the plight of many young adults and his advice is to follow the path that you believe in, not one that anyone else is leading you down.

“The reason why I created Music First is because music should come first no matter what; money shouldn’t drive it or anything else for that matter. I think that after college a lot of people are pressured to follow a road that everyone else embarks on. I just want everyone to go after their own dreams, write their own story, and leave no stone unturned. When you’re 80-years-old and think back on your life, make sure that you have no regrets, and that you know you did everything that you really set out to do. It might be hard…that’s something that I still struggle with every single day.  There are so many days where I literally think, you know what, maybe I’ll just go work at a label, maybe I’ll just go work with other people, etc. But then I think about this: There are so many talented artists out there that don’t ever see the light of day because everything is so political… because you can be the most talented artist in the world, but if you’re only good at that, and you’re really not good in business or have zero social skills, you might never get heard, it’s sad.”

Josh is a very smart dude, but above all else, he hustles and works hard.  Without those latter two, the brightest individuals can be left behind.  Josh’s advice for any young adults out there pursuing a career is to keep at it.  In addition, remember that you were once starting out on that career path as well, and that you were probably pretty scared.  It’s so beneficial whenever someone with some knowledge is willing to share it with those who seek it.

“Persistence is just a better word for being strategically annoying.  Ambition is the path to success; persistence is the vehicle you arrive in.  So what my dad always told me, and I don’t care what anyone else says, they can tell you I’m the most annoying person in the world, but I will be the most persistent person and be the best at it.  Always lend a hand. I never ever turn down a message. I don’t want somebody to know that I’ve read it and didn’t respond. That’s rude; there are so many people that still do that to me.  If you can take two seconds out of your day to help someone, you may change their life.”

Josh is all about inspirational quotes, so I’ll leave you with this one that he shared with me.  It perfectly sums up Josh’s worldview and why he left a more traditional job to follow his own career path…

And for the record, Josh gave me this quote weeks before Kanye decided on changing his album title, yet again.