by Matthew Meadow
in Featured, For the lulz, Worth Sharing

I think it’s safe to say that we all had some pretty varied reactions when Zedd released his new song with Aloe Blacc, a tribute to “Candyman,” and an advert for the M&Ms brand. The slightly poppy tune was heavily influenced by Zedd’s recent involvement with rising producers Grey, and it certainly added a lot to his ability to brand in the corporate world.

Not everyone respects his decision, however, as we’ve just seen in a tweet from Diplo. 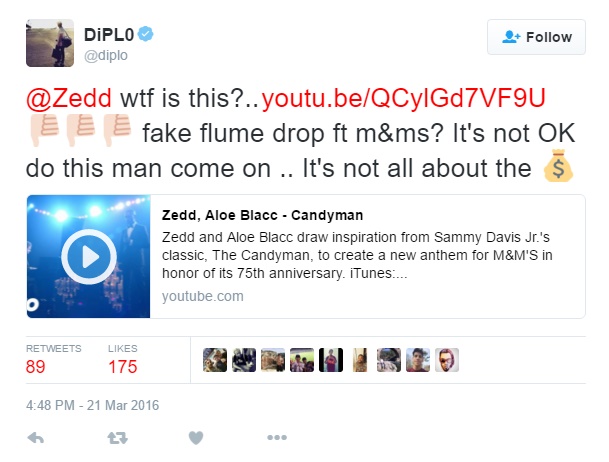 We can’t fault Diplo for having his own opinion, not in the slightest. That would be absurdly hypocritical. What we can fault him for is publicly putting Zedd on blast to his nearly two million followers who follow his beck and call in a ridiculously juvenile manner.

Zedd isn’t having any of it, though. 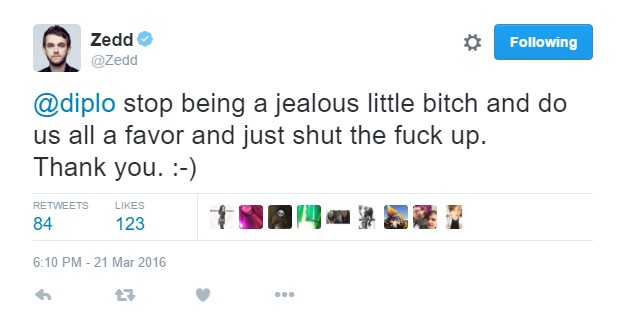 Check out the song below and let us know what you think.

And now even deadmau5 is getting in on it!!

..unless it's a bieber collab… Coz that's in no way, about money. We all know zedds shit sucks. But we love him. https://t.co/aYQ7k6ylNX

Literally hopped off Justin's dick to say someone's shit is about money? God DAMN I love Twitter. I do. 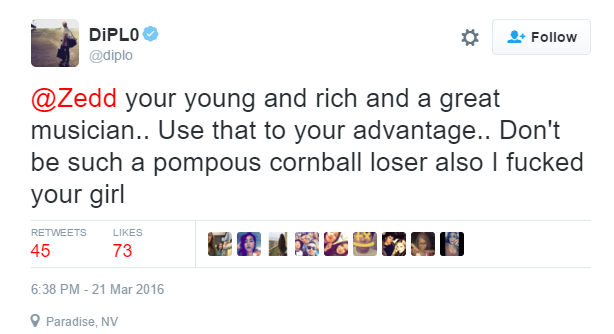 @deadmau5 Joel why are u so obsessed with Justin's wiener ? I can introduce you if you want ?

At this point it’s clear that Diplo is trying to make this more about himself, his music, and the fact that he’s homies with the one and only Justin Bieber than anything else…