Music festivals have been known to bring in a nice little uptick in the local economy from time to time, but data provided by the Coachella Valley Economic Partnership in tandem with the Greater Palm Springs Convention and Visitors Bureau has the Coachella Valley Music and Arts Festival and Stagecoach Country Music Festival bringing in $704 million to the global economy – slightly more than uptick I’d say!

At $704 million, Coachella is unsurprisingly the highest-grossing music festival in the United States and compared to 2012, when a similar study was conducted, has grown significantly. Coachella has increased its ticket prices by up to $100 in the past four years, but at the same time has also seen up to 7,000 more attendants per weekend. Coachella 2012 saw festival-goers spending $254 million in the valley and $90 million in Indio in addition to just under a million and a half in ticket taxes.

Goldenvoice, festival organizers of Coachella may even consider adding additional weekends (from three to five) which would result in an even greater economic boon for both the Valley and Indio.

Consult the table below for more in depth numbers on spending at Coachella and Stagecoach. 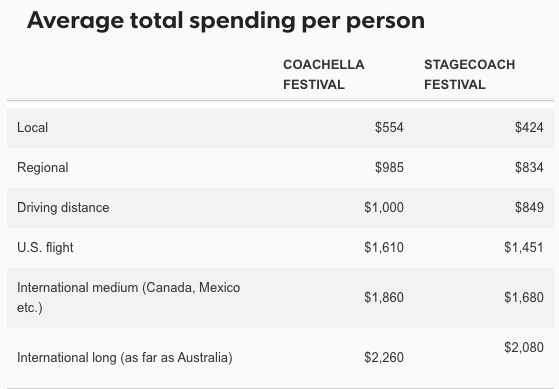