The story begins with a written statement sent out by Bassnectar’s team at the end of March, directed toward his large number of supporters who create their own merchandise using his iconic symbol. Lorin Ashton’s idea was to establish an online Art Exchange, where he could receive a cut of compensation from what would otherwise be pieces of “bootleg merchandise,” according to his statement. Rather than allow his fans to profit off of something that he and his team created themselves he said, they should leave his logo off of their work entirely unless they decide to work with him directly.

If the story had ended here, there wouldn’t have been very much to report. Bassnectar has a right to defend his brand and likeness, and allowing others to utilize and profit from his image without his knowledge or consent would be irresponsible. Whether or not this plea will go heeded is unimportant, as it’s the precedent behind the statement that speaks to Ashton’s character. Even though he could take a more passive approach to the matter, and allow his fans creative freedom while continuing to earn six figures for single performances, it’s a decision that regards his own material and branding, things that are more than sacred in the modern music industry model.

But the story continues. Back in 2011, the work from Max Hattler, a highly acclaimed media artist and filmmaker, caught the eye of Ashton. Known for his psychedelic visual graphics and trance-inducing style, Hattler’s work was taken on by Ashton for use in his live shows. The track “Rollz – Plugged In” would be accompanied by Hattler’s 2010 film 1923 aka Heaven.

In 2013, Ashton and his team contacted Hattler himself, asking to work together on upcoming projects. No agreement was made during the conversations, and the two ended their discussion. Ashton, however, continued to use Hattler’s visuals in his live shows from 2013 to 2015 during “Frog Song.”

Despite Ashton repurposing Hattler’s work for his own gain during a several year period, much in the same way he’s just reprimanded his own fan base for doing, Hattler was unaware until very recently. He took to his own Facebook page to call out Ashton’s behavior.

In a short back and forth exchange, Bassnectar attempted to explain his motives behind using his work, saying that in the DJ/VJ world, it was common practice to “sample” others’ work. The exposure he gave him by using his material for his own purposes was of value, he said. Despite the length of the message, Cartoon Brew noted that nowhere was there an offer of compensation for using his work during the previous six years. 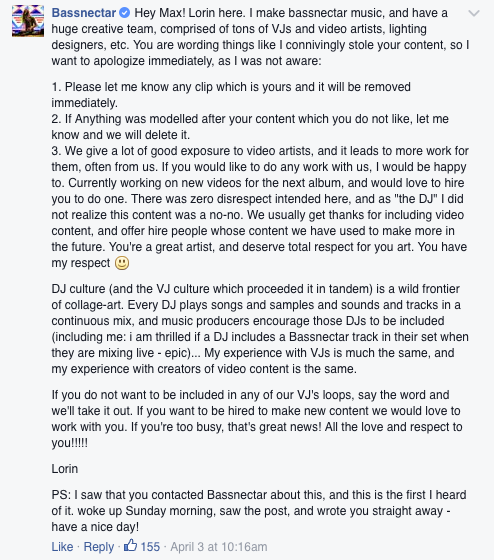 Hattler quickly responded, describing the difference between sampling someone’s material as a smalltime creator and a multimillion dollar business.

Clearly, Bassnectar is caught between a rock and a hard place. It’s futile to attempt to separate his own actions from those of his fans which he has condoned. Hopefully, he and Hattler are able to work out some form of compensation for the years of unlawful and unethical repurposing of his work. Then, we hope Ashton rethinks his recent statement to the artistic bass heads wanting to do the same.

Prepare Yourself For Justice’s Imminent Return