Wasn’t weekend one of Coachella amazing this year? From Jack Ü’s insane new stage set up and guest appearances to the reunification of one of rock & roll’s greatest outfits Guns N’ Roses, the first weekend of Coachella captured audiences from Indio, California and beyond. But to understand the proper magnitude of last weekend’s mayhem, here’s a recap brought to you by Twitter.

The weekend recap shared a variety of interesting information tidbits about the festival’s biggest moments including the most tweeted about performers at Coachella, the number of tweets about the festival during the festivities, and the top emojis used during the weekend’s tweeting pandemic. The weekend recap goes further into showing all the different tweets from major musicians, bands, rappers, and DJs who played at Coachella sharing their favorite moments through Twitter.

First off, despite the common issues of low or nonexistent internet service at festivals, there were 3.8 million tweets about Coachella over the weekend. (Not all of these are actually from the festival, of course.)

Twitter’s data also showed which artists were the most Tweeted about. And though Guns N’ Roses were the most-talked-about headliner by a large margin, the most-Twetted about artist overall was actually at the Outside Theater stage: Halsey. Guns N’ Roses doesn’t even show up until #4; and of the top 6 artists on the list, only half were actually billed to perform. 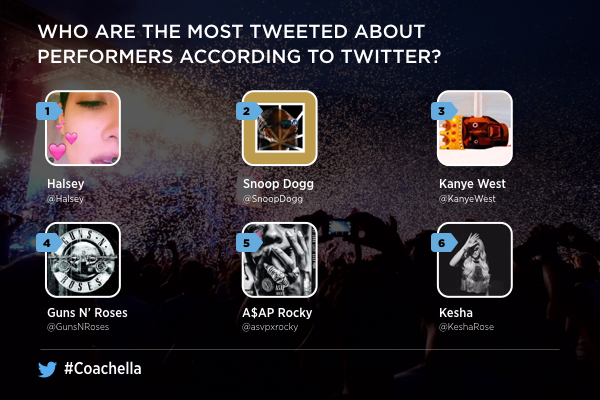 The data went so far as to reveal even the most-used emojis of the weekend: #1 was a palm tree.

From presidential candidate Bernie Sanders announcing Run The Jewels before they hit the stage, to Zedd bringing out Kesha, and Calvin Harris bringing out Rihanna, Twitter’s weekend recap will hopefully repeat as prominently next weekend.