A few weeks back, I had the esteemed pleasure of being able to sit and chat with two of the most down to earth, honest, fun, and respectable guys in the music industry. They’ve been at their game for nearly ten years, touring, producing, creating, making memories, and all while building a brand, a radio show, a music label, and a relationship with trance and house lovers all over the world. Tritonal is not simply a household name. And the two guys behind this amazing collaboration are not your average artists. They are both extraordinary, hard working, and dedicated individuals in all that they do in their lives. I can only wish I had the work ethic and tenacity that they have. I hope our readers learn many things from this exclusive interview and come to know Tritonal as a force to be reckoned with in the coming years.

You both have been dominating the progressive scene for quite some time now. What are each of your takes on your success and how far “Tritonal” has come?

Chad: “Well I attribute most to our work ethic and the fact that we stay present. We don’t really get side tracked. It may feel like to a lot of our fans we have become an overnight success, but we have been at this for eight or nine years day and night working to get Tritonal to where it is now. We have been building in all avenues and markets, all over the country. We really take a lot of our work on social media and in the industry seriously, and we are just trying to do our best out there. We are each our own biggest critics in all of this. Being an artist and staying creative is also really important to us.”

Tell us which of the “This is Love” remixes stand out to you most and why.

Chad: “Well the King Arthur remix is definitely great, as it kept to the original housey vibe with the pitched up vocals, and Topher Jones is the guy behind the King Arthur project. We all go way back as buddies, and even toured together about four years ago, Maybe we are a little biased since we have that relationship with Topher. Blasterjaxx did a really great job as well, and both remixes have a lot to show for.”

What do you both do to get hyped up before a show?

Dave: “Honestly the preparing of the show itself is what gives us huge energy before a show. Setting up lighting, stage effects, surveying the landscape of it all, it gives us a really huge rush. We are both very much involved in getting the show started, and that really helps us be pumped up for a great night playing for our fans. Also, just playing a show is enough to keep our energy up.”

You each have a ton of events and shows coming up, as if all the ones you’ve been to before weren’t exciting enough. Which events are you looking forward to most?

Chad: “There is an album tour we are going to be releasing information on. You may see a hint of something coming up, but the full details will be released asap. We have a new single this month, and then we plan on releasing another single before the album drop in August. This tour is going to be absolutely insane. Branding for this tour is also very important, because if you look at artists like Ariana Grande or Coldplay, or even events like the Super Bowl, they really take into account how to brand their entire tour based off of their album or events. For our album, we began branding for it back in January and we will be able to continue that into our visuals, designs, website, etc. If you can tell a story correctly and have it speak the same language as the visual, then it will connect better with your audience. We have been fortunate enough to have this body of work come together so well after two years of effort. We have grown so much in this process, and it can take anyone to such a huge level as an artist and a producer and as a person.”

You each seem to be like night and day for one another. How do you each coexist with one another and complement each other so well while being in a duo and being the best of friends?

Chad: “Well the question answers itself there. We really have to complement one another in order for a business and personal relationship to work. We can mess up, and it’s okay because no matter what we each have the same dreams and goals and we focus on what’s going to get us there.”

Dave: “We learn from mistakes and move on. It’s important to be able to keep moving forward when you’re in a duo, and when you’re friends too. And we really are different and that’s what makes each of us special together as a team.”

If you each had any advice to give to up and coming artists out there, what advice would that be?

Dave: “A lot of people seem to have a huge focus on being a deejay and performing. That is really great, but you also want to be able to master your craft as a producer. Focus on producing and learning how to actually create. That to us is extremely important.”

Chad: “Kids these days too are so impatient. Everybody wants that big success now. They get a program and some loops, some sound effects, and get the interest of a company who sells them the idea of instant fame and overnight success. The truth of the matter is that most people involved in music are not as successful as they may appear, and that the people who are successful have been doing their work for eight, nine, ten years. And it’s something you work at every day. You don’t just make track after track with no vision of the message you want to convey to people. They talk with every release about how they’re back in the game working hard again. But for us, back in 2008 we wrote about 65 songs that year. To this day, if we are home not doing anything on a weekend we are making music. The six hours or so you take making music on a Saturday can really add up, and it works that way for us too.

Dave: “We don’t procrastinate either. The work ethic involved is really necessary, and aspiring producers see the highlight real and think it’s gonna happen overnight. Put the effort and work ethic into your brand and creativity as an artist and that will get you to where you want to be.” 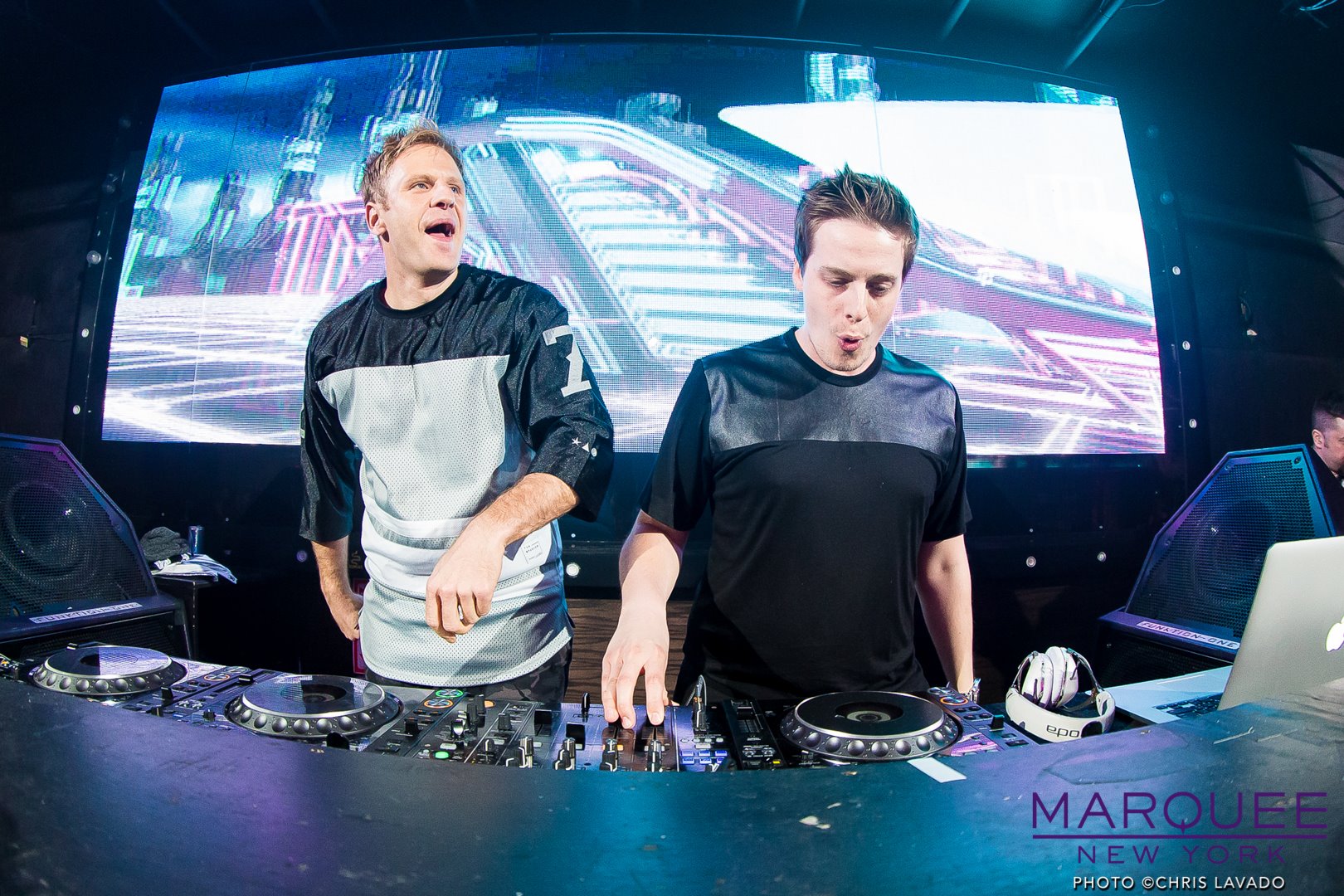 Are there any upcoming collaborations you are hoping for, or do you have anything new in the works with anyone special?

Chad: “We have a very big record that was recorded recently, and the track is going to be huge. We are hoping everything works out for it so we can move forward with it. We also have been contacted by Ellie Goulding’s team, so we are going to see what may lie ahead for a collaboration there. And the upcoming album has 16 or so songs on it, with many of them having awesome collaborations on them, so stay tuned for all of what’s to come on the album for sure.

Stage presence and sound design for live shows are obviously very important. your music really makes a huge impression on your fans when you play live. Are you going to be working on any creative ideas to present to your listeners for your upcoming live performances?

Dave: “We really like to run our visuals live, on stage, and we can be at a venue for a show for hours before hand making sure everything is going to work well. There are a lot of technical aspects involved, and we love being a part of that process. We will be redesigning our visuals for the new album tour, making sure that our listeners are being told a story the entire time they’re at the show.”

Chad: “It’s all being represented in sort of a seasonal theme. The butterfly, for example, represents the springtime, and there will be an ongoing theme for the rest of the album tour as well. We have considered live performances, but we will probably be holding off on that type of situation until we have put out a few albums. It’s not something out of the question, we just really enjoy playing as we do, but we will be thinking things out for the future of live performing.” 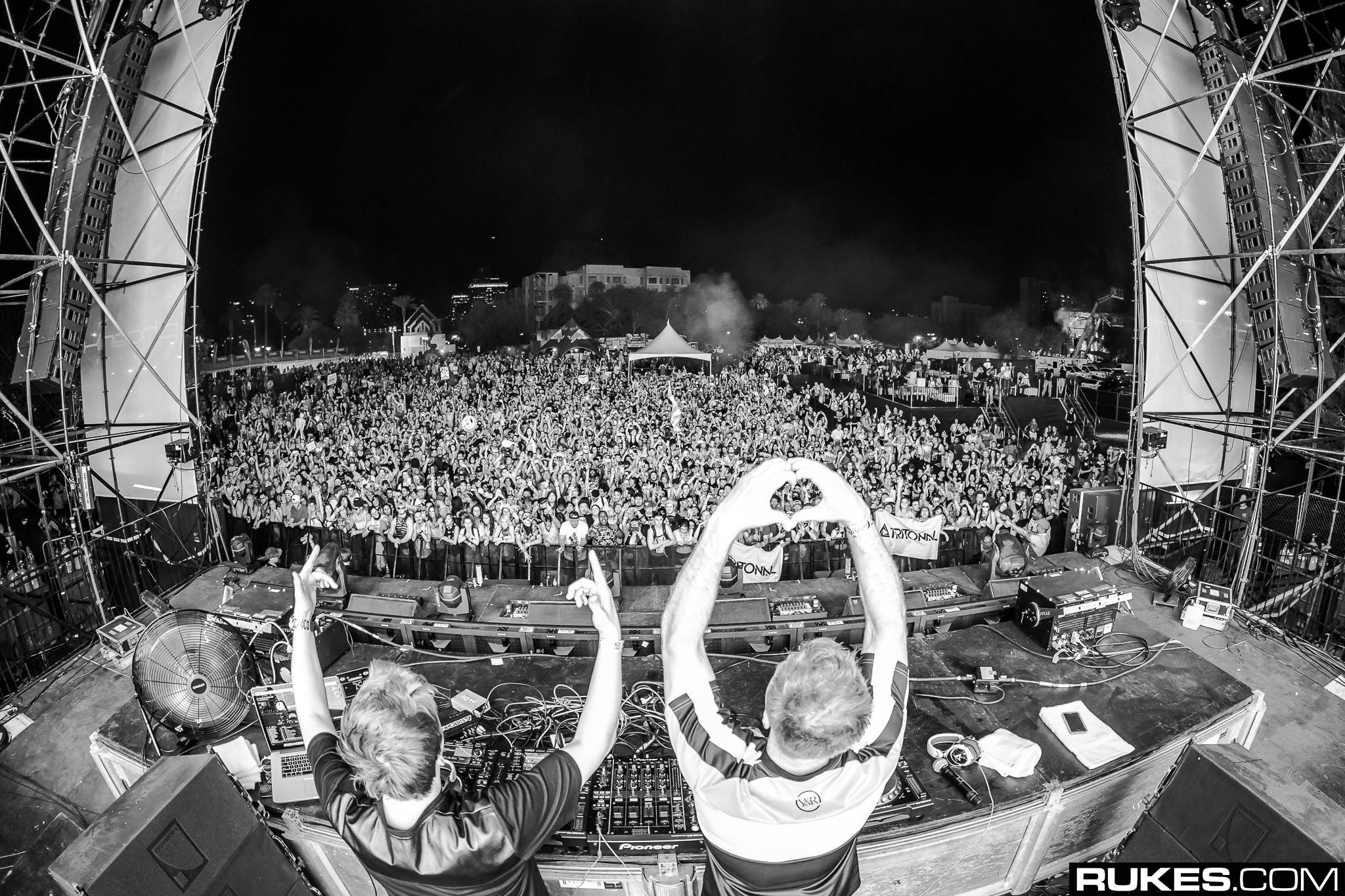 Your hit radio show “Tritonia” has been on the air for years now, and it’s something thousands of people tune into each week. Looking back to when you began, what were your goals for the show then and can you say you have reached them?

Chad: “In terms of when we started Tritonal, we would look at like Armin’s radio show or Above and Beyond’s Trance Around the World. We aren’t at that level yet, and it very well could be. It’s on BPM and Sirus XM four times a week. We aren’t satisfied where it’s at yet globally, but we are working on it constantly. We are not going to stop the growth of the show.  We never really knew if we thought of Tritonia being a part of the end all, but it is an awesome branch on the Tritonal tree in terms of our growth as artists.”

Do you have anything new in the works for Enhanced Music?

Chad: “Enhanced 350 is going to be up soon, so that’s cool, and we’re building up a lot of new artists that are really coming of age. Will our label head and A&R is fantastic for Enhanced and for the team, and we keep growing and we couldn’t be more pleased with having Will as our partner in crime for the label. There are going to continue to be amazing things going on for Enhanced, and we can’t wait to see what the future has in store for the label.”

What are your favorite desserts?

Chad: “There’s this thing called a Pizookie, and it’s like a big cookie with ice cream on top cooked in a pan. The ice cream then melts into the cookie, and it’s really delicious.” Yes, we were able to find an image of this amazing dessert, see below!

Dave: “I have a sweet tooth, so I love all desserts, ice cream, chocolate you name it. And Twix for sure.”

So there you have it. Just two fantastic human beings on a crazy whirlwind adventure of music, creation, art, beauty, and passion for their listeners and their work. Be sure to look out for the album tour dates being released June 8th, and be prepared for their upcoming album release in August. Follow Tritonal on the links below, and check out Enhanced music and Tritonia radio while you’re at it!

All photos for this article were found on the official Tritonal Facebook Page.
Credit to Rukes and Chris Lavado for photos.

Bassnectar Is Now A Resident DJ For Electric Forest