The Chainsmokers’ Biggest Hit Lands In Top 5 Tracks Of 2016

With two-thirds of 2016 already under our belts, the time to begin collecting information on the highest performing content of the year is upon us. The data from all major streaming services was compiled recently in order to determine the songs that were streamed the most amount of times during the last eight months. Among pop, R&B and hip hop hits was none other than duo The Chainsmokers‘ and Daya’s most acclaimed single of the season, “Don’t Let Me Down.”

The number one overall spot this year belongs to Drake and his track “One Dance,” which remained on Billboard‘s Hot 100 chart for 10 consecutive weeks. Former One Direction star Zayn Malik and his single “Pillow Talk” occupy the second spot, and his former companion Joe Jonas has taken third with “Cake By The Ocean.” The Chainsmokers now come in fourth place, with Rihanna’s “Work” rounding out the Top 5.

The production process of “Don’t Let Me Down” was recently discussed in depth in a piece published in The New York Times.

“The easiest part of making a record is the first 90 percent of the song. The last 10 percent is when you sit there and you mix it and you add percussive fills and effects and make sure every piece enters and leaves perfectly. It takes forever.”

The result of their collaboration and refined effort was a track that went triple platinum and that was streamed more than 500 million times online.

Check out this week’s top-streaming tracks on Spotify below to get an idea of the current playing field. 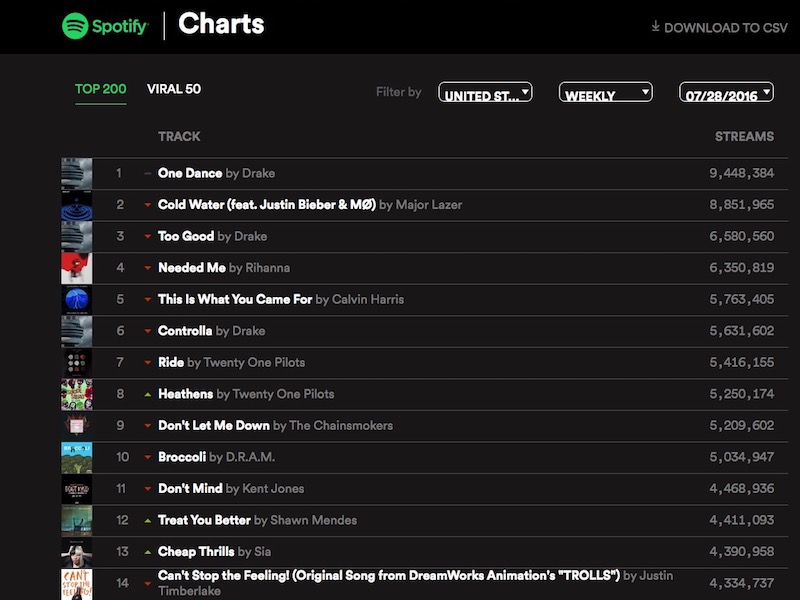