by Garrett Smith
in Interview

In the middle of a packed European tour, rising house music talent Nick Martin was able to take time out of his busy schedule to sit down with us and chat all things music. New to the scene, the Grecian artist has quickly grown in popularity, playing alongside some of the greatest in the game like Avicii, Axwell Λ Ingrosso, Hardwell, and Nervo. His progressive house sound has been rapidly drawing in crowds as well, and his latest single, “Looking For Love” featuring Nat Dunn showed off some brilliant dynamism in his production.  Find out more about Nick Martin below and see why he’s one of the fastest rising producers in the music world.

1) Tell us about yourself. How did you get to where you are today?

I have always been involved in music one way or another. From playing the drums in high school to spinning at house parties. I started DJing in clubs when I was 17 and spent countless hours searching for vinyl. It is so different now. Lots of people say that things were better then but personally I love the evolution in technology and I think that house music sounds much better sonically today. In regards to where I am today, it’s far away from where I dream to be! Work, work, work and soon things will come!

2) Describe the music scene in Athens. How does it influence your music?

The music scene in Athens is very small but Greeks love the nightlife. Between 1996-2006 Athens was the place to party. All the big DJs came to play at the time (David Morales, Sasha, Paul van Dyke) and I never missed a show. That said many of my main influences have come from traveling.

3) Who are your biggest musical inspirations and why?

Daft Punk are my ultimate inspiration but evolving from that I always loved Axwell. Then of course the Swedish House Mafia and in general the Swedish DJs of our time are a big influence. I became friends with Axwell and he is definitely a mentor to me. What I like about him is that he is never happy with the result and always strives for perfection. He pushes boundaries and evolves his sound. I also really admire Skrillex. I love sound engineering and this guy has taken the meaning of the word “sound engineering” to a different level. I have spent countless hours in the studio working to try and understand what he is doing.

4) What was the writing/recording process for single ‘Looking For Love” with Nat Dunn like? Was it a long project or something that came together quickly?

Actually Looking for Love was a record that was written by a couple of friends and then we asked Nat to sing it, she has an amazing voice. It took 2-3 months to produce given changes in the singing style and off course my change in style in the last six months. I love EDM but I am evolving to a more popular sound with amazing lyrics.

5) Looking back on your summer tour so far, what has stood out for you? What are some festivals, events, or venues that are on your bucket list to play?

This summer has been great. The shows have been amazing. My favorites have been the opening night for Avicii at Ushuaia and Cavo Paradiso Mykonos with David Guetta. Both shows were sold out. I had lots of friends there and the vibe was amazing. My bucket list has Ultra Music Festival Main stage at the top.

6) When you aren’t on tour, what are some of your hobbies (other than music) that you partake in?

Hobby is my middle name. Basketball, golf, fishing to name a few. I keep very busy in my life in general and rarely waste time!

7) Who are your top three up-and-coming producers that should be on our radar at the moment?

Seeb, Lucas and Steve, Michael Calfan. For the record I personally know only Lucas and Steve. What I like about these producers is that they bring something new to the table and it seems to me that they have very musical ears.

8) If you could pick ANY two musicians, dead or alive, to make a song with, who would they be?

U2 is my favorite band of all time! And off course Michael Jackson. I am a big fan of Justin Timberlake and I am sure he is very influenced by Michael Jackson. Fyi, I love using Westlake Studios in LA because Michael used to write there and I truly believe in creative energy and spaces that had been graced by world-class artists. I often visit a Studio in Santorini Greece (Black Rock Studios) for the same reason. Amazing energy and heavy weights like Justin Bieber and Ryan Tedder use the space.

9) What are your essential items in the studio and on tour?

In my studio the most amazing tool is the Yamaha Motif XF8, an amazing synth (I also use it for midi controlling) improving my workflow ten fold. I use Ableton (having switched from Logic) and always lay down my ideas with instruments from the Yamaha. Then I layer my sounds in Ableton with soft synths and internal instruments. But the first 7-8 channels are always with pianos, synths, bass, etc from my Yamaha synth.
On tour it’s all easy these days. I need only USBs, headphones, and earplugs. My favorite USBs are Crossairs Survivors, Headphone by Sennheiser HD-25, and -15db earplugs.

I organized 3 writing camps in the last 6 months that have resulted in lots and lots of great songs. My next release is in early September called “Skyline” F/ DJ Tigerlily on vocals. Tigerlily and I just shot the video in Mykonos and we have both been playing “Skyline” in our sets with great reaction. After that I have an amazing song that I have written with Nat Dunn & Nick Clow that I am excited to share with all of you. 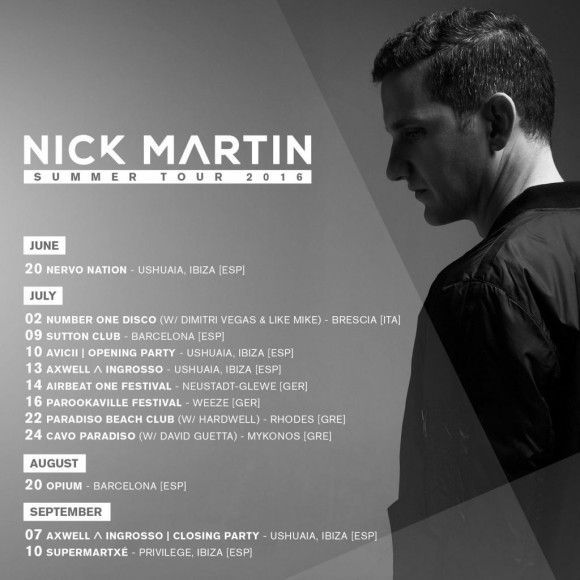