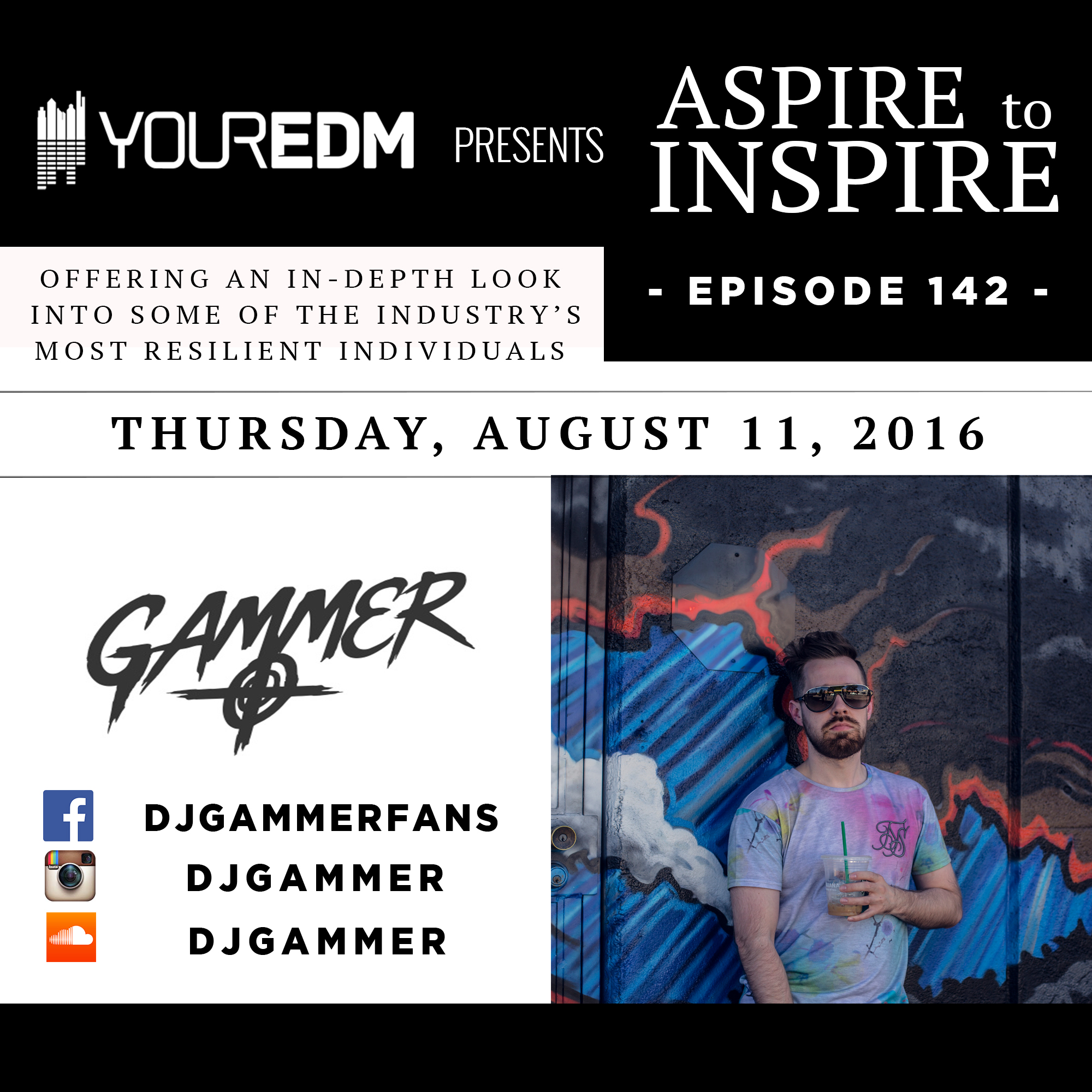 A lot of people, at least in the United States, view electronic dance music as a new phenomenon. However, for a lot of places in the world (like the UK) dance music and all of its subgenres are just as familiar as most pop songs are over here in the U.S. For those that have been in the game since its early days it provides a unique challenge to stay relevant and extend one’s career. Enter Matt Lee, better known as UK hardcore producer/DJ, Gammer. Having been in the scene since the early 2000s, Gammer has seen the rise and fall of many trends in dance music and the burgeoning of the U.S. dance music scene. Since he was a young lad in Northampton, England, it was always Matt’s dream to become a musician.

“Well, from as early as I can remember I knew that I always wanted to do something in music. From like four or five years old I loved listening to Michael Jackson, and I just loved how good and happy the music would make me feel. I remember saying to mum…I’m going to be a music maker. I even had one of those little shoebox recorders – the little cassette things that had a speaker on top and a mic in the front – and I would just hit record and sing ideas into it, you know completely nonsensical to be honest. By the time I hit 10 or 11, when DJs like Fatboy Slim were at their prime, I’d see them on TV and I’d see what they were doing with record players, and I’d be like okay well now I want to be a DJ, because that looks cool. I had no idea what they were doing; I knew nothing about mixing. I just knew that it looked awesome.”

It was in his teens that Matt went from becoming a bedroom producer to an actual pro putting out tracks on a proper record label. In a fortuitous twist of fate, Matt came into contact with one of his boyhood idols, UK hardcore producer/DJ, Dougal. Dougal was a family friend of one of Matt’s friends. He ended up giving some music to their mutual contact and later down the road Dougal finally checked it out. Next thing you know, Dougal and Gammer were in the studio together and a music career was formed. However, that was a long time ago, and as Matt has grown as a person, so have his musical tastes. Now, Matt says, he makes music on his own terms.

“I’ve always loved the hardcore stuff, but as I’ve grown older, my tastes have expanded more and more. I love music with big heavy drops, but I also still love the musicality. So I’ve just been crossing over and trying to do different things. Essentially I’ve gone back to just trying to make music for me. When I’m producing whatever I feel like doing, I’m like screw it that’s what I’m going to do today. It’s also a crazy thing because you’ve got people like Audien and Porter Robinson who have grown up listening to people like me, and then they’ve taken what we do and put it into their music. And I think that’s really cool that this quirky, underground style has inspired a lot of talent today.”

For even the most famous of DJs, life can take unexpected turns. Some of the biggest names in the game from Eric Prydz to Steve Angello to even Diplo have dad duties to add to their long list of chores. Throw Gammer into that group, as he is a proud father of two. However, when his wife (then-girlfriend) became pregnant, Matt wasn’t quite ready for it. He knew he would have to cut back on producing in order to be a dad, and that’s something that’s led to him, as he put it, going off the rails at times over the years. However, Matt says he has now found that balance between family and work life, and it’s brought him to a happier place in life.

“…it’s finding that balance of being creative for myself, supporting a family, setting time aside for my family, etc. I’m struggling the most with growing up in that sense because I still live in a world where I want to go in the studio all night, only getting five hours of sleep, and just making music. That mentality has led to other things when the music started taking a decline in the UK a few years ago. This is nothing I’ve ever publicly admitted, but for a while I wanted to quit making music and just walk away. I think the previous year they’d done the Hardcore Heaven Awards and I’d won #1 DJ for the sixth year running. I stood there onstage not knowing what to say because in my heart all I wanted to do was call out everybody who was trying to pull me down. It was just a weird time, because I wasn’t happy and didn’t have any real direction. For someone as passionate as me, it has been a huge issue. However, now that I am maturing, I can say I’ve happily found the balance. I’m happy in my family life, I’m happy with all my friends, with myself, and making music. I know what I want to do, and that’s been a very recent thing.”

Despite all the changes that the music industry has undergone over the past decade, it’s those true fans that always bring a smile and positive vibes that really inspire Gammer to keep on making the music that he loves. Like so many ravers, Gammer says that he is actually quite shy and a bit socially awkward, however, when he’s onstage spinning, all of that goes out the window. Like any entertainer, Gammer wants to bring joy to people’s lives. After all, a smile brightens anyone’s day.

“Quite honestly, I think some people forget the fans make us who we are. They’re the ones buying the records and the tickets…without them I’m nothing. So every time I do a show and Twitter is popping with positive feedback, it just makes me want to push even harder. I’m actually not the most confident person and am pretty socially awkward, but one of the things I love about DJing is when fans sing the songs back or are smiling; that makes me happy that I made someone else happy. That’s really fulfilling for me. That’s one of the things I’ll always cherish…when I’m playing a record or working on a big drop, what I’m picturing is what’s it going to do to the crowd. Are they going to cheer when it drops? I hope they cheer because when they do it’s the flippin’ best feeling in the world and I want to do that again. In these dark times let’s entertain people and show them the good things in life.”

There really is no substitute for experience, and artists like Gammer are the living proof. Through trials, tribulations, and a lot of life experience, Gammer has arrived at a happier place. More than a decade later, his music reflects this newfound happiness and self-worth. Whether hanging with family or destroying dance floors in the UK and the U.S., Gammer is trying his best to bring more positivity to the world. Anything that brings people together is brilliant.

“I just want to see more positivity, honestly. Accept people’s differences…take Pokémon Go for example. I loved it. I do play occasionally. Nintendo has done something truly wonderful, and something they’ve been trying to do for years. Within the weekend of its release, masses of people were actually going outside and interacting. They’re walking, getting healthy, and people want to critique that and make fun of them. Friends of mine who were socially awkward, like really bad with proper issues of going out and interacting have overcome their fear. They walk around with people they have just met and will go catch Pokémon together. That’s great! They have made dreams come true, and people want to shit all over that.”