Underneath the commercialized droves of mainstream DJs that preside over the most popular lineups, charts and lists – consisting most often of straight, white males – a bubbling melting pot of diverse and passionate individuals from all corners of the social and cultural spectrums are quietly curating the next big sounds. But unless a dedicated effort is made to search in places outside of the normal event spaces and record labels, finding such creators is a far more difficult task than it would seem. The music industry and still-budding electronic dance music circuit are not without their biases; the marketplace places a hefty and instantly noticeable favoring towards one certain type of performer. Despite the existence of rich style and skillful capability within DJs and producers from marginalized groups, they are very often hard-pressed to find the same opportunities as their counterparts.

Enter Likido, a brand new event series created by Filipino producer and DJ Mark Redito that seeks to break the mold within the electronic community and provide a platform for women, people of color and those with LGBTQ+ backgrounds to experience an all-inclusive and accepting atmosphere alongside their friends and fans.

The series was conceived by Redito over two years ago, and came as a personal response to the noticeable lack of diversity in the lineups that he found himself playing and attending. With a group of his close friends and peers, he set out to establish partnerships with some of the most forward-thinking bodies in the dance music scene. Los Angeles was a natural place to start, Redito said, and soon the series was connected with such underground icons as Brownies and Lemonade and Alaya.

Their efforts were quickly noticed by the likes of The Far East Movement and Skrillex, whose media platform Nest HQ helped to curate and document a special live event in LA.

The amount of instant support that the project received was overwhelming, Redito said, and came as a true affirmation of the importance of his efforts. It made him realize how necessary such a space was for misrepresented groups that permeate his close circle to have, and highlighted the commitment that those around him have for acceptance and equal consideration.

“Me as an artist is directly related to me as an activist,” he said over the phone on Tuesday. “For me, it’s all about equality and inclusivity.” 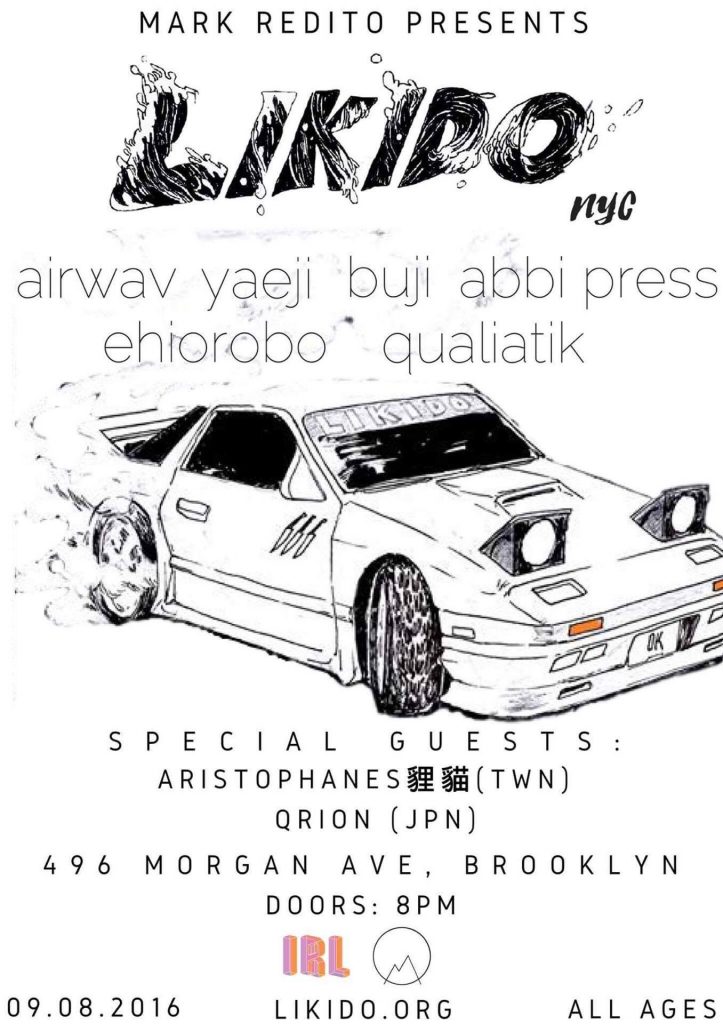 As a reputation starts to build and the collective of artists grows, Likido’s second event is set to take place Thursday, September 8 in NYC at Brooklyn’s Aviv alongside hosting partner IRL Music. Throughout the weeks leading up to the final lineup announcement, a brief paragraph was released on the series’ Facebook page describing each new artist and the reason for their inclusion in such a special group. Performing this evening will be New York natives AIRWAV, Yaeji, Buji and Abbi Press, with New Jersey’s Ehiorobo and Philadelphia’s QUALIATIK rounding out the roster beside special guests Aristophanes and Qrion.

Tickets for the all ages event can be found at Likido’s official site.

In celebration of the series’ second installment, Redito has also released his latest in a collection of singles, “You’ll Only Love Me When I’m Gone.” Featuring soulful, overlapping vocal chops and a relentlessly bubbly percussion section, the song evolves into a powerful dancehall club rhythm with anthemic, droning syllables and warm sub bass thuds.

Listen to the song below, and visit the link above to reserve your tickets to witness the humble beginnings of a series that’s sure to impact and offer refuge within the dance music community for some time to come.

LDRU – Next To You (Remixes)

LDRU - Next To You (Remixes)