It’s hard in this climate of mega festivals like Coachella, Bonnaroo and EDC to pick out some of the more niche festivals around the country. Small little boutique festivals are popping up more than ever – most of them fizzle just as soon as they appear, but some really take hold and bring something special to the table.

Day For Night had its inaugural year just last year, and has already received massive praise worldwide. This year, they aim to break expectations even further with a stellar lineup, larger venue, and more. 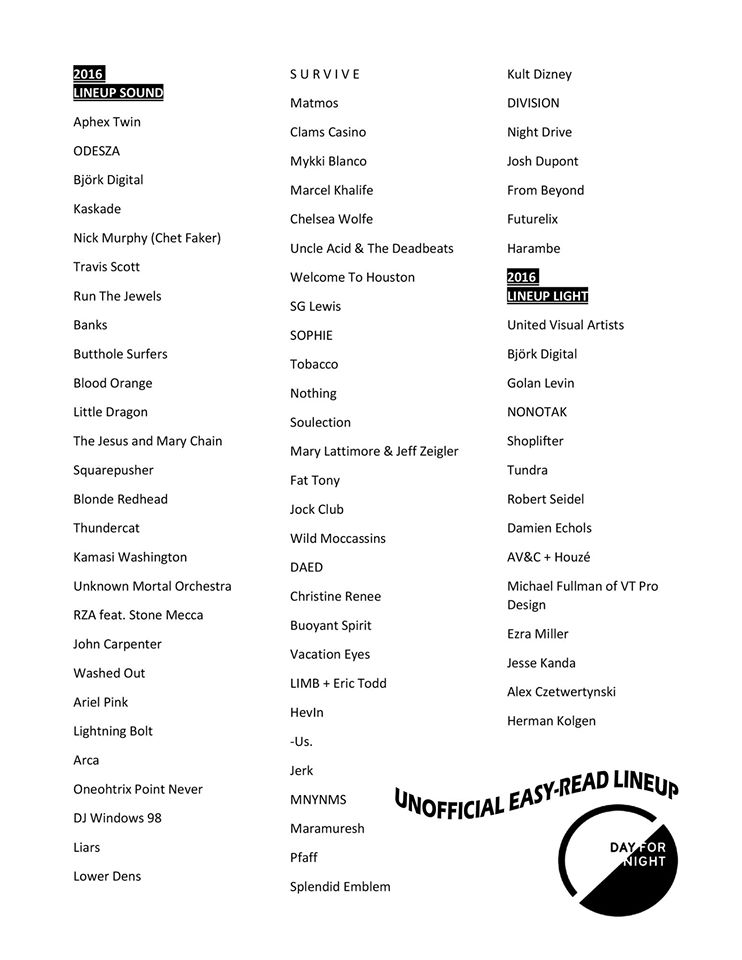 Day for Night will mark the first US performance by groundbreaking electronic artist Aphex Twin since playing Coachella 8 years ago, as well as his first appearance in Texas in more than 21 years. ODESZA will perform on the heels of their recently sold out performance at Red Rocks Amphitheatre, maxing out the venue’s 10,000 seat capacity during their latest tour in June. Hip hop sensation Travis Scott is performing hot on the heels of his latest album, Birds In the Trap Sing McKnight, which debuted at No. 1 on the Billboard 200. Butthole Surfers’ reunion performance at Day for Night will be the famed group’s first in more than five years, uniquely merging their brand of experimental rock with custom, cutting-edge visuals. This year’s Welcome To Houston lineup features more than a dozen of the city’s most influential hip hop artists, including Slim Thug, Bun B, Lil’ Flip and Paul Wall.

In addition to groundbreaking headliners, the festival features a number of artists in the zeitgeist, with performances by legendary director John Carpenter, innovative composer Marcel Khalife and jazz saxophonist Kamasi Washington, as well as S U R V I V E, whose members are widely regarded for their soundtrack to the popular Netflix series Stranger Things.

This year’s music lineup was curated by founder Omar Afra and music veteran Chris Wise with the objective of creating a festival that features acts you aren’t likely to find anywhere else.

“We’re trying to create a once-in-a-lifetime event by showcasing artists that audiences may never have the opportunity to see again,” Afra says. “Day for Night is simultaneously a current snapshot  of popular music, as well as a platform for trailblazers who continue to cross over from fringe to influential. The focus across multiple genres is on acts that specialize in an inventive and highly visual approach to performing.”

The Chainsmokers Have A Collaboration With Coldplay’s Chris Martin