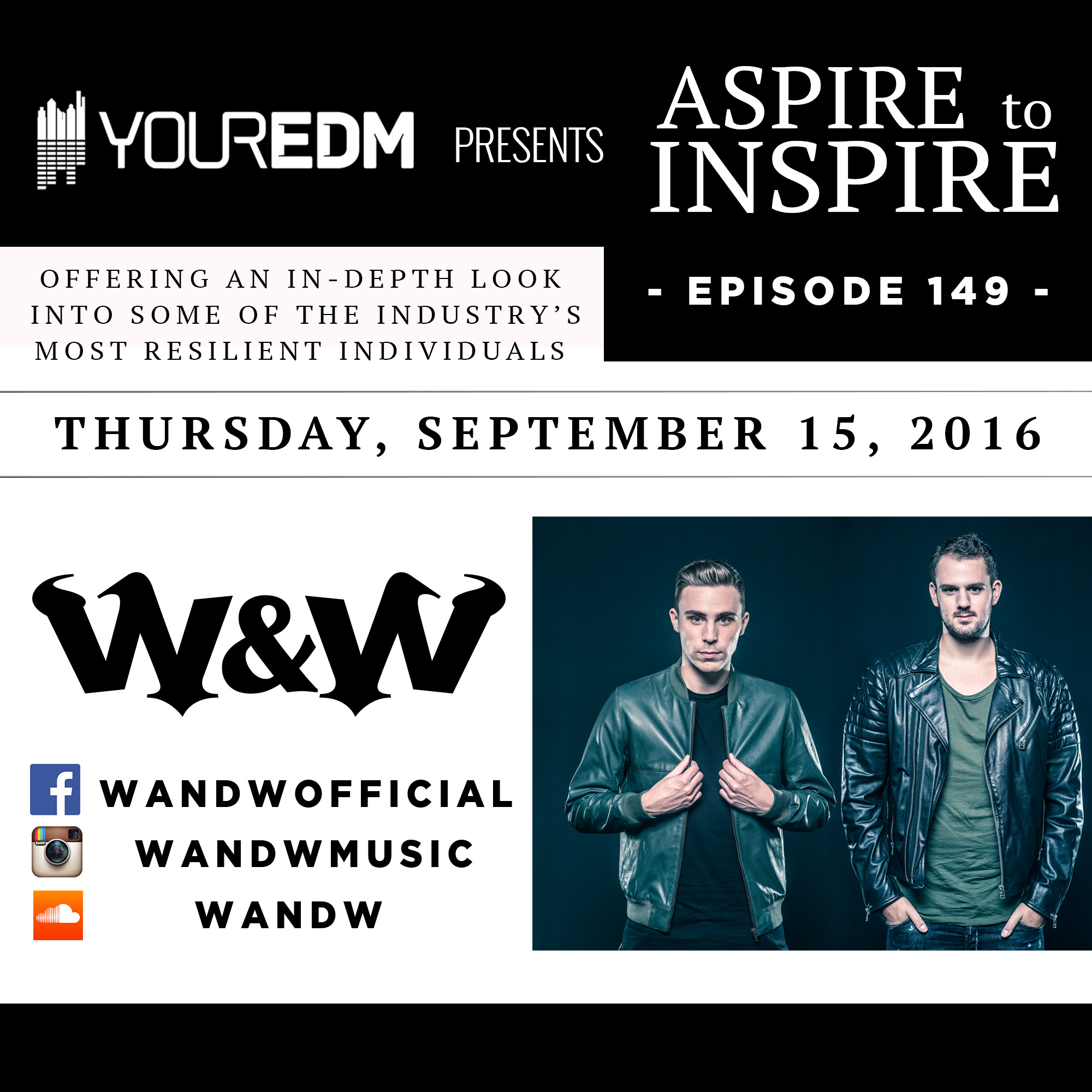 As we all know, the Netherlands is a hotbed for dance music talent, producing some of the biggest names in the business. Even in a saturated market, few acts have distinguished themselves as much over the past few years as Willem van Hanegem and Ward van der Harst, who together form W&W.  Their anthems can be heard at mainstages across the globe and they have collaborated with fellow Dutch superstars such as Hardwell and Armin van Buuren. Although they’re at the top of the game now, success was a long time in the making. Ward and Willem originally linked up in the very early days of social media. In fact, their first means of communication was through MySpace and Windows Message Boards.

Willem: “We were on Windows Live Messenger and we all started adding each other and sending stuff we were working on. Ward added me and we started talking and hanging out. We went to Trance Energy with groups of upcoming producers to meet up and hang out. Ward and I both had our own solo projects, but we made a Trance song together and then we sent that to Armin and he played it! Then Tiësto played it as well, and neither had played our music before!”

Ward: “We knew at this moment that our career together was starting to go somewhere.”

Although the “&” sign in W&W caused some problems in the early days of search engines, getting their music out has not been a problem for Ward and Willem. However, once W&W started taking off and they began touring heavily, Ward and Willem encountered other problems – a problem that’s plagued many DJs when thrust into a nonstop 24-hour cycle of touring, recording, and partying. The guys encountered both physical and mental stress. In fact, for Willem, he developed problems with his heart rhythm and bruises on his lung from heavy non-stop touring and partying. Thankfully, the guys take much better care of themselves today.

Willem: “When we first started touring a lot we had crazy schedules. In 2013 we played Malaysia on a Friday, Los Angeles the next day, and then Sunday in Miami. And we went on and on and on.”

Ward: “I think it was five continents in three weeks.”

Willem: “And I was sick, I was really sick. Then we went back home to the studio and around 5pm I was looking at the screen and I told him, dude I’m not feeling well…call the ambulance. So I had to go to the hospital. I had a lung infection, and things were going awry with my heart muscle and rhythm. This went on for like 6-7 weeks. It really scared me; we didn’t know what to do. It’s W&W and only one dude showed up. We had to cancel a few dates.”

Ward: “At first we just cancelled for two weeks, but then we heard it was going to be six weeks to two months. That was right before the summer, so to cancel the whole summer would be a bit extreme.”

Willem: “Touring can be really damaging on your body, especially when you travel to every time zone.”

Ward: “Right now we pay more attention to our health.”

Willem: “We try to work out and eat really healthy. In the beginning it wasn’t like that, but after awhile you need to watch out, especially with a heavy schedule.”

The rigors of touring worldwide can take its toll on the body, but the toll it can take on one’s mind is even greater. From Kanye West to Avicii, we’ve seen the mental and emotional strain that being a superstar can place on an artist. However, Ward and Willem seem to take more of the athlete’s mentality and block out all the exterior noise. This seems to come naturally, especially for Willem, whose dad is of one of Holland’s most famous soccer players in history. There are far worse fates in life than not making the top 10 of the DJ Mag poll.

Ward: “It sounds very cheesy, but there are so many people who focus on what other people are doing instead of focusing on their own journey. Try to be as good as you can because what others are doing shouldn’t really matter. You could be in a much worse place.”

Willem: “I see artists being negative and I’m like why, you should be happy, you’re able to make music. I’m really happy to do this. We’re going to go play a show for people that actually know our songs. One guy has more followers, and one guy has a bigger chart position…who cares? I don’t understand why people worry about that. We’re all in this together, let’s try to make this thing as beautiful and as big as possible. That’s how I feel about it. We don’t get jealous; we’re actually happy when somebody makes a really amazing song and that inspires our own work ethic.”

When it comes to their fans, it’s the little things that stand out for Ward and Willem. Whether it’s a little kid telling them he/she loves their music or a fan who asks about an ID at an exact moment during a set, the fan love is overwhelming for W&W. This is not lost on the guys.

Willem: “It’s still crazy today when we go somewhere, and afterwards people are like hey I loved your set at Ultra. It amazes me when someone runs after us to get an autograph or a picture.”

Ward: “We get a lot of messages on Twitter, Instagram, Facebook, etc. from people telling us how our music helped them through difficult times and that’s always really amazing to hear.”

Willem: “When I was young and feeling down, I would always listen to music that made me feel better. So it’s amazing that our music is able to do that for other people. The music helped me, now it helps them.”

Dance music is thriving today and so diverse that there is truly something for everyone. Few genres of music have the global appeal of dance music. The music never stops, the reach around the globe continues to expand. With dance music, there is no wrong way to feel.

Willem: “A lot of songs have vocals to guide you, ours is just the melody that makes you feel…whatever you want to.”

Ward: “I think our music really inspires people in various ways. We say that because people from South Korea who don’t really understand English lyrics, they still listen to our music. And some people from America maybe listen to it in a totally different way, even though it’s the same song. So, it can help and make people go crazy in all parts of the world; that’s something I like about dance music in general.”