by Jake Lahah
in About, Editorial, EDM News, Events, Previews

Since summer has reached an end and fall comes into swing, many get discouraged thinking the festival season is now over. But for those of you living in the Pittsburgh area and are feeling a weekend getaway from work or the books, this years Thrival Innovation and Music Festival might just be something worth checking out.

Thrival is a festival that includes not only music but aspects of, innovation within our communities, that stretches across five days (September 20th to 24th). The festival is all about showcasing some of Pittsburgh’s local, national, and international innovations in ecosystems.

The innovation portion of the festival (September 20th to 22nd) features many seminars and workshops across topics in art, technology, food, music, and more. With over 4 keynotes, 30+ programs, and 50+ speakers involved, the festival showcases how expansive and pioneering the Pittsburgh community is with innovative culture.

This year’s music festival installment will take place at the cities own Carrie Furnaces, a prime location for a festival like Thrival to play with its industrial and eerie feeling. Music will be playing Friday & Saturday of the festival (September 23rd & 24th).

Compared to previous years, this year’s lineup has much more of an EDM presence. Performing Friday night is everyone’s favorite DJ duo The Chainsmokers. Along with them, electro-rock and pop group CHVRCHES will be headlining one of the stages that night. Also playing Friday are funk rock group Lettuce along with hip-hop and R&B artists Daya and Sir The Baptist. Saturday’s show will be headlined by D.C. based jam group Thievery Corporation. Saturday That same day also features pop group Metric, rapper Ty Dolla $ign, and one of the most under the radar producers and DJs, Hudson Mohawke.

With single day tickets at only $50 and two day tickets now at $69 (which you can purchase here!), this event is relatively affordable cheap for a lineup of filled with amazing artists and in-depth knowledge you may not get anywhere else. Check out the full lineup poster below and we look forward to hopefully seeing you there! 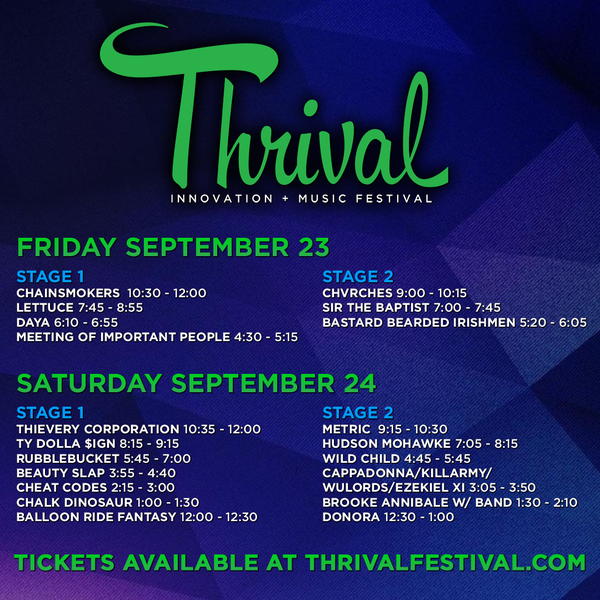 Stonebank – The Only One feat. Ben Clark [Monstercat]

Jake Lahah is an artist and music lover located in the suburbs of Washington, D.C. Studying printmaking and photographic techniques, it's no wonder he combined his love of music and art to be a photographer. He also enjoys a well made lasagna and anything with bacon in it.