Peru’s annual Creamfields music festival was held this weekend on the sprawling Fundo Mamacona, coming as the event’s 10th anniversary in the South American destination. With a roster boasting some of the most recognizable DJ talent in the game, including Blasterjaxx, Sam Feldt, KSHMR, Oliver Heldens and more, the one-night fest was shaping up to be one of the series’ best installments yet.

That was, of course, until “unsafe conditions” backstage forced headliner Tiësto to cancel the entirety of his performance, leaving fans less than pleased.

According to a post the Creamfields Peru’s official Facebook page, a group of fence-hoppers attempted to climb the walls behind one of the stages. The security detail were able to stop them from getting in, but they responded by throwing objects, the post said. Tiësto’s team decided that the situation was not safe enough for him to perform, it said, and they left the festival grounds with what appears to be very little communication to the organizers. 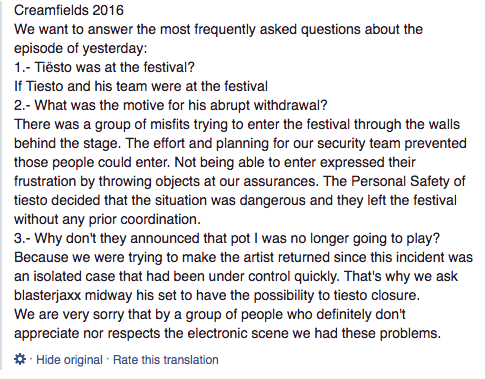 Meanwhile, the crowd who found themselves waiting for Tiësto to show up became enraged, throwing dozens of glass bottles onto the stage. A video captured by attendee Victor Tello Diaz shows the display in full.

Watch Skrillex’s Mothership Stage Back In Action At ComplexCon [VIDEOS]

Watch Skrillex's Mothership Stage Back In Action At ComplexCon [VIDEOS]