At this point in the history of branding at live events, it’s become undeniable that Red Bull and EDM go hand in hand. No matter what festival or concert venue is hosting a dance music show, you can bet that somewhere on site there’ll be a energy drink vendor and the iconic blue and silver coloring. The company’s longstanding partnership with some of the most exciting and high-octane sporting and music events has made it an expected staple in the scene, but what’s often overlooked is the beverage’s startling array of health risks associated with its consumption.

Personalise, a UK-based gifting site, recently published a graphic that details exactly what’s happening inside the body during the minutes and hours that follow a can of Red Bull. With the science behind the drink now in full view, it’s no wonder that some nights have gone sour simply from consuming a can or two.

According to the research, the caffeine found within Red Bull begins to permeate the blood stream within 10 minutes, causing an increased heart rate and blood pressure level. 15 to 45 minutes later, the user will begin to feel more concentrated and wired, depending on how fast they consumed the drink.

30-50 minutes later, the caffeine absorption is complete and the drink’s effects truly begin to set in. Dilated pupils, heightened blood pressure, and bursts of insulin due to increased blood sugar all start to take effect. The liver dumps sugar into the blood stream, and converts it into fat. The adenosine receptors in the brain are also blocked from experiencing drowsiness.

The sugar crash begins about one hour later, when the caffeine effect begins to wear off and overall energy decreases. If the user went to the bathroom, they also will have urinated out all of the water contained in Red Bull, along with the valuable nutrients it could have given to the body.

The overall level of caffeine in the body is halved after five to six hours. For women on the Pill, however, this process will take 10 hours.

Withdrawal symptoms begin to kick in from 12 to 24 hours after consumption, with users experiencing the urge to drink another can. As is the case with any kind of substance withdrawal, effects like drowsiness, headaches, irritability and constipation can all take effect.

Seven to 12 days later, and the body will become used to the level of caffeine consumption and feel less of the effects. This means, if Red Bull is had regularly for a week or more, users will start to need more before they get the same “energy high.”

Check below for the full graphic, and make sure you understand the risks before popping open your next can at a festival. And beware when mixing red bull with alcohol like vodka; preliminary studies have shown that the mixture of high doses of caffeine and alcohol can have similar effects on brain chemistry as cocaine. 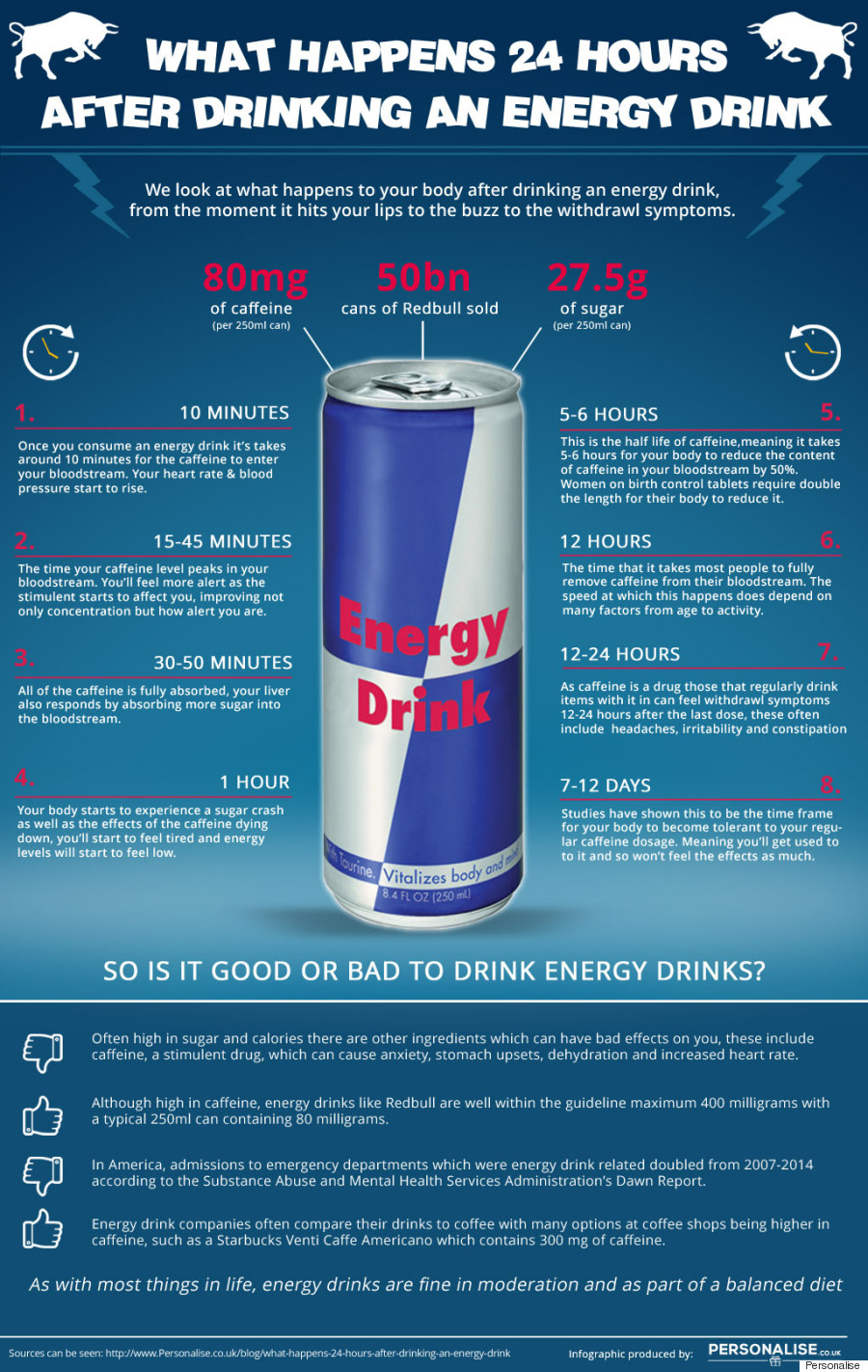 Check Out The Best Deals On Headphones & Speakers For Black Friday

Check Out The Best Deals On Headphones & Speakers For Black Friday