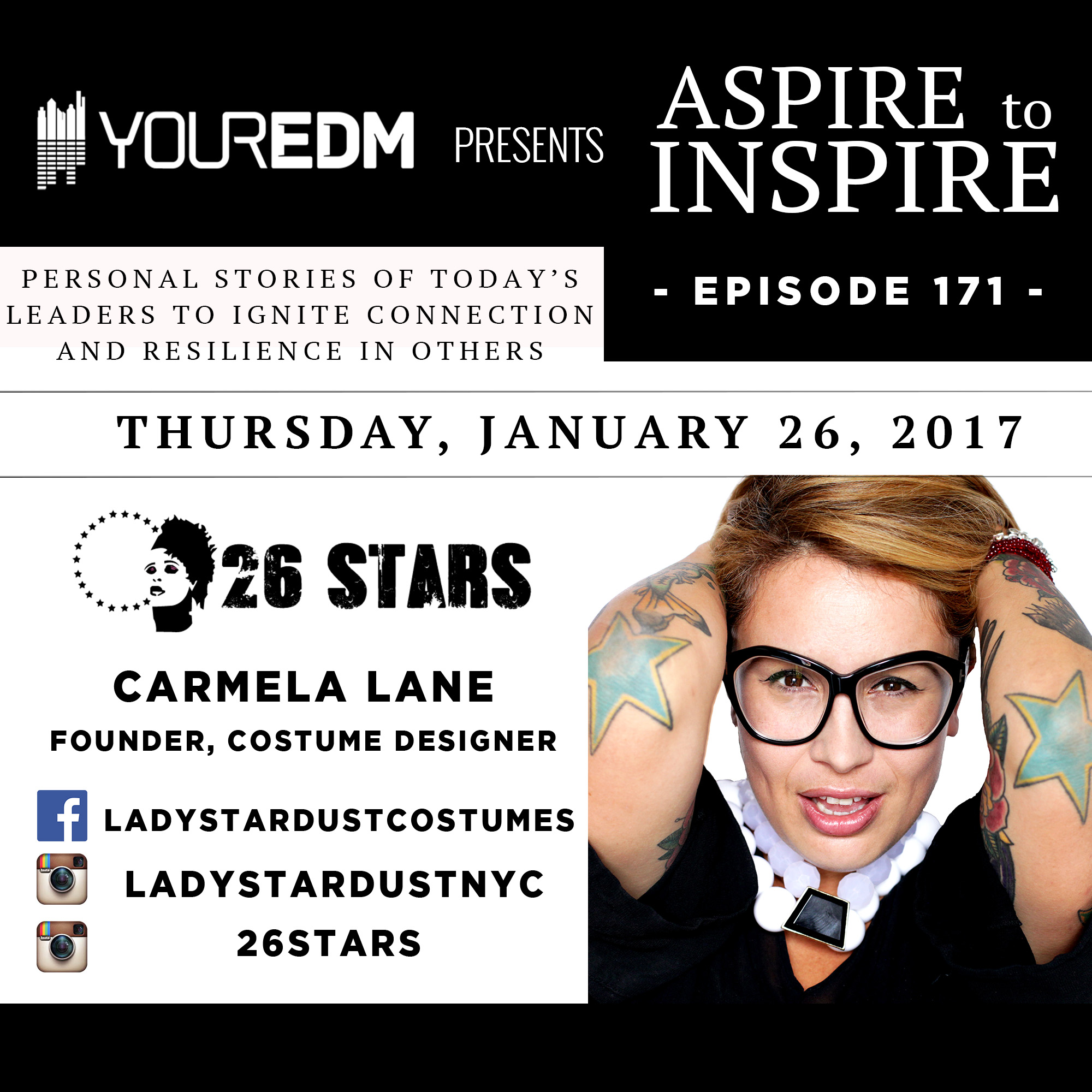 From her earliest memory, Brazilian-born Carmela Lane was always drawn to costumes and design. When she was just five years old, she told people with conviction that she would one day become a fashion designer. Her inspiration for this line of work stemmed from her father, who designed and worked with shoes his whole life. However, Carmela viewed shoes as boring and uninteresting, so she diverged her path and focused on fashion, and more specifically, costumes. Today, Carmela’s childhood dream has turned into reality, as she runs her own successful company based in New York called 26 Stars, which offers services including production, costume design, and talent booking.

Carmela’s journey to achieving her childhood dream was far from easy, and involved a steep uphill climb along the way. At the green age of fifteen, she moved out of her parents’ home in Brazil and lived on her own. Her initial independence was accompanied with hardships, but over time Carmela was emboldened by her autonomous lifestyle. She was able to successfully support herself, proving that she could do whatever she set her mind to. Fast forward eight years later, and Carmela set off with only $100 in her pocket to one of the most revered cities for fashion — New York City. If she had learned anything while living on her own, it’s that she could take care of herself, in any situation or living condition.

With her arrival in New York, Carmela’s dream was to one day attend the famous Fashion Institute of Technology. The tuition, however, was not something she could afford when she first arrived, so she would just sit in front of the school and envisioned a time where she would be able to attend and learn from some of the best about fashion. Determined to accomplish this goal, Carmela hustled night and day by working a slew of odd jobs to save. Although she had lived on her own for the last eight years, it was still a hard adjustment for Carmela who was unable to see her family back in Brazil. It wasn’t easy, but Carmela’s unwavering confidence and persistence were the driving force to her success. Finally, she was able to save up enough to attend the school she had always dreamed about. The Fashion Institute of Technology gave Carmela a great foundation and the perfect launchpad for a successful career.

Since then, Carmela’s career has taken her down many fruitful paths, including most recently the electronic dance music industry. Fittingly, music has always been a great source of inspiration for Carmela. She credits it for steering her in the right direction at a young age when she was living alone. It was also a vessel that allowed her to connect with people, and form meaningful and lasting relationships. Today, Carmela is embedded into the EDM community working alongside talented people like Katie Kansas, the Entertainment Director for Ultra Music Festival. Carmela’s work can also be seen at TAO Nightclub, one of the most renowned clubs in Las Vegas and in all of North America.

Working so closely with many EDM festivals and clubs, Carmela says she feels inspired by the people that she works with. She sees more and more people joining forces to build something bigger and better for the community. However, Carmela still sees one resounding issue in the industry. She believes that go-go dancers are undervalued by people who organize and attend these events. Carmela wants performers to be viewed as business professionals. They add a unique element to the show, and deserve more respect and recognition for their work. Each EDM event she works, she strives to change that perception little by little. By treating them like business professionals and organizing unique performances, Carmela believes it’s only a matter of time until dancers play a larger role on and off the stage.

Willing to fight for what she believes is right, Carmela’s pure passion has allowed her to reach astounding heights. Her inspiration for the work she creates comes from peers around her, but not in the way you would think. She identifies trends, and attempts to create something that is the complete opposite. This way, she is truly creating something unique that has never been done before. Even when watching an old movie, she’ll think of ways she could incorporate their style into attire for dancers. And this kind of creative approach has been the catalyst to unique opportunities for her. Just recently, she was the costume designer for a show put on by Joffrey Ballet, a highly touted ballet company. To date, this was Carmela’s greatest highlight in her career, with surely many more to come.

Carmela’s independence at a young age forced her to mature quickly. This allowed her to develop a relentless drive and exuding passion, which allowed her career to proliferate over the years. Inspired by the music and the people around her, Carmela not only creates unique work, but also stands up for causes she truly believes in. Always remember to think different, follow your true passion and never be afraid to fight for what really matters to you.