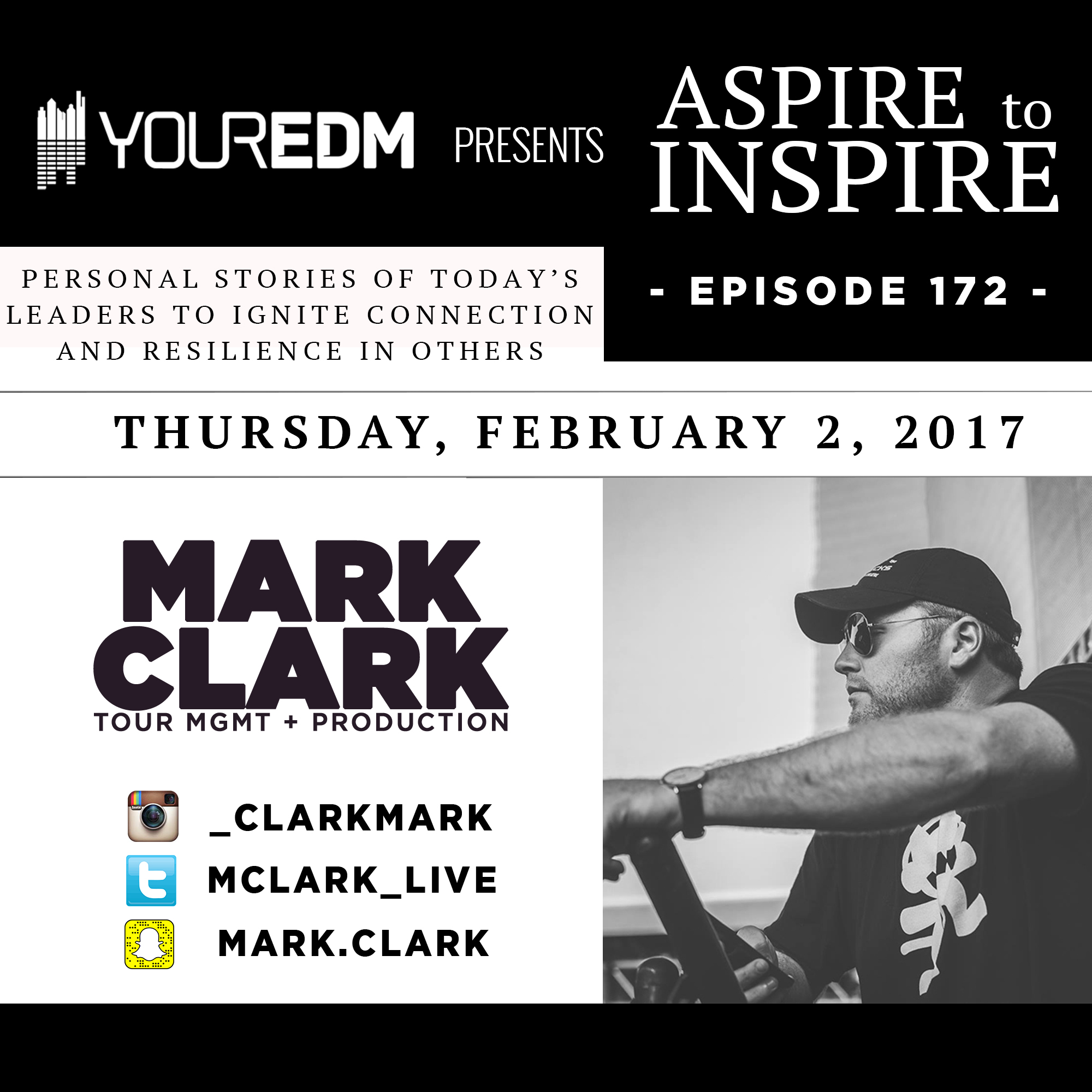 “My head has always been out of the classroom. I was always daydreaming about music or something fun or just being a part of something bigger.”

For some people, the biggest deterrent from chasing our dreams is the vulnerable process of learning. More often than not, we are expected to know it all beforehand, have the connections already made, and experience magically appear on our resumes— or at least we think that’s what is expected of us.

The truth is that learning through hands on experience, not being afraid to ask questions, and staying true to why you wanted to do this in the first place will get you farther than assuming a persona that seems unshakeable.

This is most certainly the case for tour manager, Mark Clark, as he climbed his way up through the music industry, taking note of every teachable moment along the way.

Growing up down south in Mobile, Alabama, there was not much access to the world of live music. Mark spent a lot of time outdoors whether it was fishing at the family’s beach house on Dolphin Island or running around the farm at his friend’s house up the road. For a long time he had relied on the music supported by MTV and the like. To him, that was his closest concept of live music. It wasn’t until his older brother Dennis started going to concerts that he ventured out to discover more of the music world.

“When my older brother started going to shows, that was what really opened the door. His older friends listened to Phish and a whole bunch of other jam bands. That was my foundation coming out of the MTV world of Blink 182 and Rage Against the Machine. But once I started going, I was constantly on my parents about it. Then when I started driving, my ability to go see shows and experience things grew.”

Although attending shows and concerts with his brother and friends was a fun and cool thing to do, it was so much more than that to Mark. It was inspiring. To Mark, it wasn’t just about listening to music he really liked. The idea that there were people out there whose jobs were entirely focused on creating that experience for others was fascinating.

“Just like anyone else, I was a kid influenced by the things I saw. My older brother was a rebel without a cause. And Rage Against the Machine didn’t help— or maybe it did, haha. I always wanted to think outside the box. I always felt that we are the ones in control of our lives and wanting to be a part of something bigger. There was never something that I directly wanted to be, but more just living life and having fun with something that was bigger.”

Soon after he started attending as a fan, Mark began finding ways to get involved. He volunteered, joined street teams, hung up flyers for artists like String Cheese Incident, and before he knew it he found himself with a job transporting artists to Hangout Festival in 2011. As “an extrovert at heart,” as he says, it was a great way for him to connect with people who would soon teach him everything he needed to know and get his foot in the door. Still without a clear professional goal in mind, Mark started to feel like he was moving in the right direction.

Mark quickly took on more roles. Heath Bennett, tour manager for Boombox, was the first to give Mark a chance out on the road as a tour manager, followed by an opportunity to work with Savoy. Mark is particularly thankful for all Heath has done, as he opened important doors for the rest of his career and trained him for the tour managing position. As he took on the new position, the idea of giving an artist the same experience he received so many times as a fan was now at his fingertips. He reveled in it.

“I was doing the grunt work. I was getting paid, but I very much felt like an intern but in a good way. I was the new kid that was hungry to learn and doing whatever they needed. I learned the discipline of being on the road from working with Boombox and Savoy. I became really prepared to take what comes each day. When I came out of that in 2013, that’s when I truly thought ‘okay I think I can make it.’

The thing is, I want my artists to really have an experience that they’re going to talk about for years to come. I want them to feel like they can come to me for whatever they need. When I was a fan, I was a part of that experience, and it inspired me to not only work in the industry, but to also give artists that same feeling and experience. I want them to want to go on tour. I want it to be something where they go home saying it was the best experience they have ever had.”

Starting from scratch and climbing your way up through an already cutthroat industry, however, doesn’t come without its fair share of doubts and challenges.

For Mark, influencing his peers and transitioning from an “outsider” to trustworthy and familiar colleague wasn’t as easy as it seemed. Even today, his phone calls aren’t always answered right off the bat when “Mobile, AL” shows up on Caller ID. Beyond this, keeping up with the latest proves to be no easy task either.

“One of the biggest challenges was just gaining respect. You’re surrounded by people who are constantly watching you. Is there a finish line where you’ve “made it”? That’s uncertain. I think it’s a never-ending challenge and you’re always going to be learning something new. The industry just continues to grow and grow. The obstacles in front of you are always evolving. Trying to find a balance is an everyday obstacle.”

Like many others trying to find their place in the world, there was a time that Mark didn’t think he was going to make it.

After moving to Austin, Texas in 2013, he soon felt the heat of the haunting doubts in his ability to achieve what he had set out to be a part of. Almost a year passed by before he found something permanent, but along the way he met Thievery Corporation’s manager, David Geller, who restored his outlook on the journey.

“It was tough when I moved to Austin. My experience had me thinking I was going to move, get hired, and make it in the big city. I had to pick up a bar-back job just to make ends meet. I didn’t know anyone, but eventually met David Geller. I’m grateful for his insight and mentorship. He gave me an opportunity to stick around and I wanted to be involved in any way I could – even if it meant driving a manager to get coffee. He needed help and I was there.”

Mark then traveled out to Denver, Colorado for Snowball Music Festival where he met Caked Up. He was given the opportunity by Nate Schoenfeldt with Warpath Group to take on the role as Caked Up’s tour manager, and he soon felt he had achieved what he had been striving for when he first started hanging flyers as the member of a street team.

“The experience I gained from working with Caked Up was at a much higher level in the industry and it truly took me out of the whole jam band side and into the EDM world. That was when I felt like I was a real tour manager. They were one of the biggest acts at the time. It put me into the light, and out of the grind of trying to figure it all out. I learned a lot of positive things from that.”

After Mark had parted ways with Caked Up, he met a young producer under the name Snails. Snails was looking for a tour manager at the time and the two ended up working together for almost the next year and a half. As Mark puts it, it all seemed to fall into place at the right time. Having just ended 2016 tour managing NGHTMRE and Slander on the Gud Vibrations Tour.

In such a fast-paced industry, that seems to be the way things go. If you put in the hard work and pay attention to the learning experiences that constantly surround you, everything will fall in line and you’ll keep pushing forward. The biggest obstacle, while there are many things that can happen, is usually our own self-criticism.

“The biggest challenges are the battles with yourself. The industry itself is tough and when you feel let down and think you aren’t going to make it, you’re almost killing yourself. Passionate people tend to criticize themselves pretty hard. Caring so much can kill you if you don’t feel that it’s going to work or if the opportunity isn’t showing up. This industry is very cutthroat and taxing both physically and mentally, especially in the climb.”

As the tours, the teams, and the companies get bigger, there are always new challenges, but just be patient and true to yourself and don’t be afraid to shake someone’s hand.”

Having the courage to step into the light and make a name for yourself can be an intimidating thing. As Mark advanced through his career and drew his inspiration from key tour management figures like Clancy Silver (currently w/ The Chainsmokers), Jim Runge (formerly w/ The Black Keys), and Bryan Aiello (currently w/ ODESZA), he always made a point of putting himself out there and making the important connections.

To Mark, networking and finding an efficient way to do so is one of the most important hurdles to get over.

We work together, we win together, connections are made and the right opportunity will come from there forward. As I continue to grow, I hope to have more opportunities to be a leader on improving the connectivity here; a guiding light in the right direction.”

So get out there. As you read this from your small town or big city, know that the only thing that will get you out the door and closer to your aspirations is yourself. The next move you make can be as simple as a handshake, but it will steer you in the right direction.

Be kind to yourself— be patient with the process, and before you know it you’ll be a role model for the next kid.