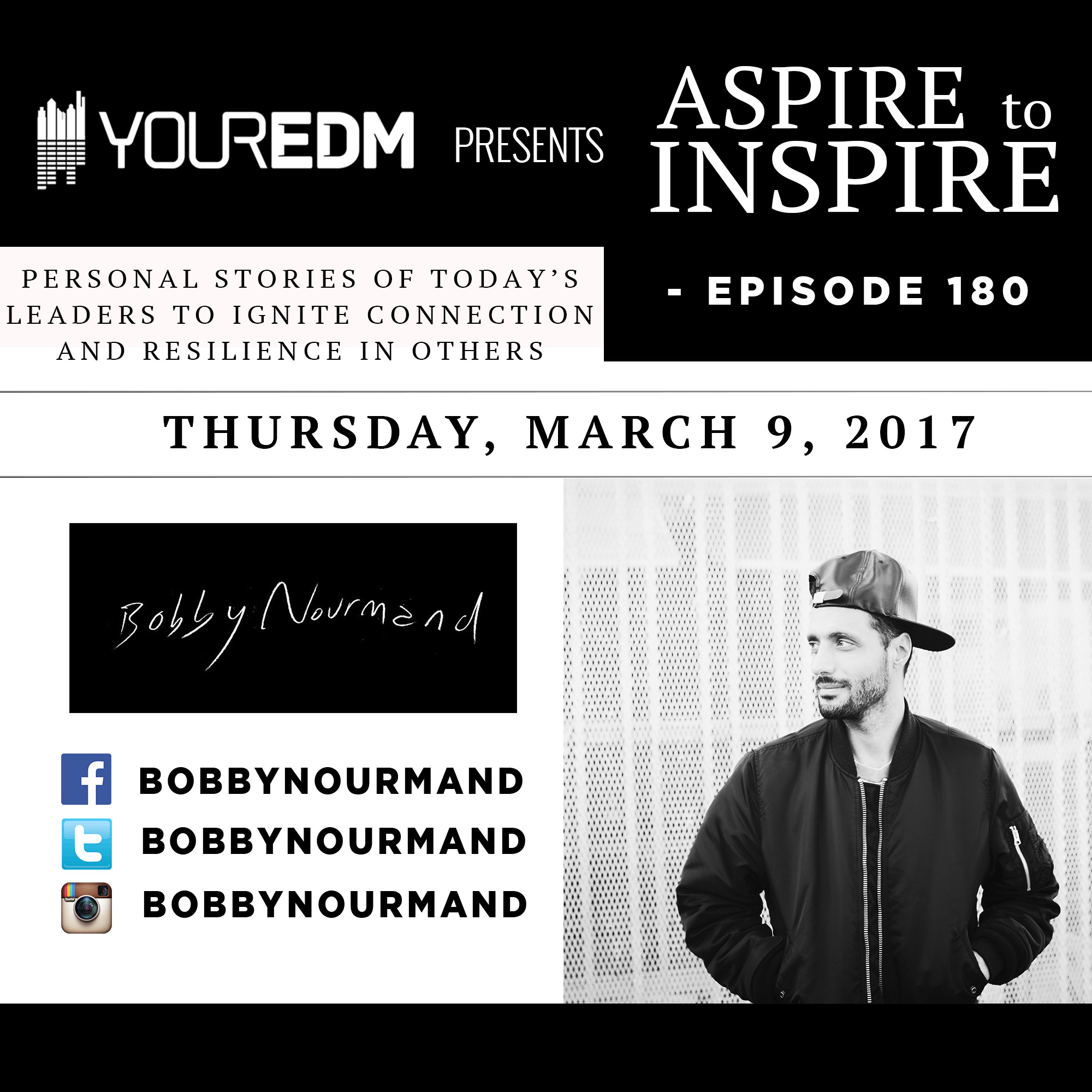 Bobby Nourmand has always had music running through his veins. His mom and dad constantly exposed him to music throughout his childhood. His mom loved dance music and disco while his dad blasted classic rock. It was from these early moments of exposure that Bobby realized his passion.

At age three, he started playing the violin. Eventually, he made the switch to the saxophone in middle school. As he grew older, as is the tale for many musicians, he put down the sax in exchange for a budding social life. Although he no longer played any instruments, he knew that music was in his blood and it wasn’t going anywhere.

“Music has been in my blood since I was a child. After I put down the sax, I was obsessed with digging for music, on Napster and Limewire to make mix CD’s for my friends.”

As his taste-making skills refined over the years, Bobby began toying with the idea of having a career in music once again. He bought turntables and started practicing–a natural progression from making mixtapes. It wasn’t until he was 23 that he began DJing, the same time he decided to become sober. The decision to pursue both sobriety and his passion for music stemmed from the same purpose. He was an active member of New York’s nightlife scene. Being a promoter for various nightclubs in New York City he lived the party life that is so often associated with the electronic dance music scene. However, after a few years of it, he felt as though he wanted something more. He had huge ambitions to become an artist, but felt stuck under the influence. He says,

“It was like Groundhog’s Day, where I was living the same day over and over again. I had these grand ideas that I wanted to achieve. However, the rubber never really hit the road until I got sober. Once I got focused, I began to realize that my career in the real estate business, as lucrative as it was, wasn’t going to make me whole. I knew after the first gig I played, that it was my calling. It wasn’t for the money. I just wanted to follow my passion because it felt right. I felt like I needed to get sober and eliminate the people, places, and things around my drinking and usage. I had to eliminate that in order to figure out and achieve the best version of myself.”

It was then that Bobby began to give everything he had to making a name for himself in the industry. He began at the local level, playing at New York clubs in Chinatown, quickly rising up the ranks to playing residencies internationally.

“I think that fear is the ultimate obstacle to success. We obviously have fear for a certain reason, to protect us. But most artists and most creatives, including myself, can have an abundance of fear, which can get in the way of our success.”

He realized getting sober was the only way to dispel the fear and jump into his goals head on. As we now know, that leap of faith paid off. His quick rise to fame was a grand one. After being a traveling international DJ, Bobby began to feel that familiar sensation of having a void blocking him from his goals. However, he didn’t want to fill that void with drugs and alcohol this time. It was at a gig in Spain where he had an a-ha moment that enabled him to push himself to the next level. He says,

“One of my last gigs before I started going to production school was in Spain. I played a huge venue called Opium. I would play these rooms and if I was lucky, 5-10% of the people would end up following me after the gig. The truth of the matter was, guys who were coming up and making singles and getting the outreach and promotion based on those singles were becoming massive. At that point, I just got the itch to produce. Song selection and the transitional period between the two songs was the extent of my creativity. I wanted to express my vision to the world. That’s what made me want to start producing my own music.”

It is obvious what drives Bobby Nourmand to create the music he does. He isn’t in it for the glitz, the glam or the party. He’s in it to connect with his fans and inspire them with his music and story. He says,

“It’s really not about the party for me. It’s not about the glam or the girls. I’m in a relationship. It’s not about spraying bottles or the gimmicks of the whole thing. It’s 100% about the music and communicating a message to the world that if you follow your passion or whatever it is you’re truly meant to be, you will succeed.”

So I asked him, “What would you say to someone seeking advice on how to find his/her passion and purpose in life?”

“I’ll answer your question with a question. If you had no fear and you knew you would be taken care of, what would you do? Whether that’s being an artist, a doctor, or a psychologist etc.…what would that be for that person?”

That is what Bobby Nourmand’s message is all about. His success is an example of what it looks like for an artist to embrace and overcome their fears and dive in after their purpose. After realizing his calling for music, Bobby has experienced countless successes, making him a true leader by example. But he leads in other ways as well. He likes to extend a hand to those struggling with their artistry, sobriety, or any other issue. He seeks to foster a community around his music and the people who enjoy it. Every day he wakes up with the goal…

“To help someone in need, never give up, and show the next person that they can do it too. I aspire to inspire others. I like to give hope to the person who is struggling with artistry, alcoholism, or any other challenge. I have been able to do that in two specific areas – music and through my sobriety. I have been able to lead by example. I try to help others by staying truthful and not being sidetracked by the results. If we are in our truths and we focus on being our best selves and helping other people, we will get everything we need and more.”

Bobby makes an effort to reach out to fans who are struggling as often as he can. He communicates with them via Facebook, Twitter, and SoundCloud. He highlighted the importance of this when he said,

“If one response to a message on social media will give this person the inspiration to be themselves just for that day, that moment, that minute, or second, or hour, then that’s worthwhile. I want to be that guy who helps those people get to where they want to be.”

What started as a passion for music has turned into a project to inspire others to realize their potential. Bobby Nourmand is a great example of what it means to pay it forward. He lives to inspire and build up those around him who dare to dream.

Please feel free to reach out to Bobby for help via his socials: