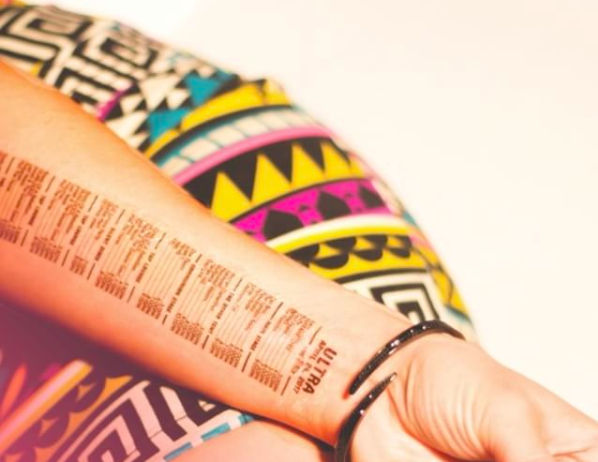 This Company Lets You Tattoo Festival Set Times On Your Arm

Company Gigtat has just teamed up with Ultra Music Festival to offer the first round of its incredible new product to attendees: wearable festival set times in the form of temporary tattoos that you can put on your body for quick access during a party.

The idea is a simple one. First, fans visit Gigtat’s website and search for the festival that they’ll be attending. Once they find the event, they can preorder tattoo set times for each of the individual days. Then, once the official set times are released by the festival itself, Gigtat draws them up and ships them out.

Are you prepared for Ultra? Get your temporary set list tattoos today at Gigtat.com #gigtat #partyproof

What makes the product stand out, however, is just how clean and crisp the tattoos look. Despite having very small print, the examples shown on the company’s site and Instagram make them out to be completely legible and stylish. According to Gigtat founder Philippe Bosshart, the tattoos are even party-proof, meaning they won’t rub off during a typical festival experience.

“The tattoos are 100 percent party-tested. They handle mud, water, beer, sweat, and whatever else you might throw at them, other than the alcohol wipes we provide that take them off in seconds.”

In addition to the cool idea, Bosshart said the company donates 10 percent of all proceeds to youth music programs, such as Miami Music Project.