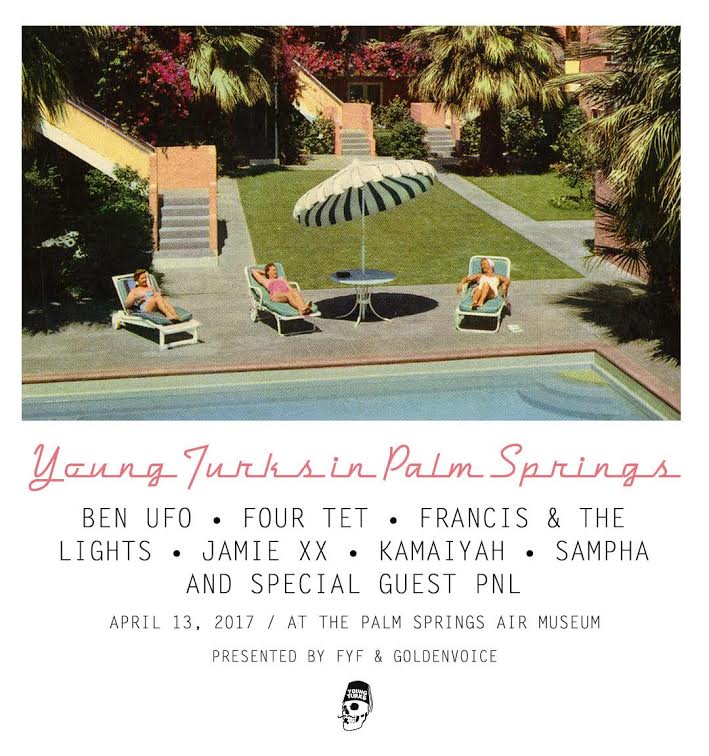 Celebrate on the Eve of Coachella With Jamie xx, Four Tet & More [Giveaway]

In a little over a week, the 19th edition of the legendary Coachella music festival will take place in Indio, California, officially kicking off the festival season and showcasing performances from the likes of Radiohead, Lady Gaga, Kendrick Lamar and much more. A very special event will preclude the first day of the first weekend, bringing one of the best record labels and some of their amazing artists to a breathtaking venue.

On April 13, the Young Turks record label, FYF and Coachella organizers Goldenvoice will host Young Turks in Palm Springs at the Palm Springs Air Museum. The lineup is mind-boggling, complete with Young Turks stars Jamie xx — a rare one-off appearance from The xx member as he’s touring with his band — and Sampha, in addition to Four Tet, Ben UFO, Francis & The Lights, PNL and Kamaiyah. That lineup alone could justify its own one-day festival, but the event’s venue of the Palm Springs Air Museum provides an intimate stage for many of Coachella’s performers.

Tickets are on sale now, but Your EDM has teamed up with Goldenvoice to reward a lucky winner with two passes to the event, free of charge. The giveaway runs from the night of April 5 to the early afternoon of April 10, and entrants can earn multiple entries by following the below instructions. Click below to enter our giveaway to Young Turks in Palm Springs, and we will see you next week in the desert!

Enter to win tickets to the Young Turks record label event in Palm Springs happening on Thursday, April 13th.
in Giveaways on LockerDome