Rejoice Boys Noize fans, the legendary Alex Ridha is bringing his Warehouse tour to North America. Fresh of the heels of releasing a two-part remix pack for his acclaimed Mayday album, Boys Noize will be playing a few select shows for any fans lucky enough to catch him on our side of the pond. The Warehouse tour sold out during it’s European run and some lucky fans even got to see six hour sets. Alex will bookend the tour with appearances at major festivals on each coast, starting the tour with an appearance at Mysteryland in New York, and an appearance at HARD Summer as Dog Blood.

Alex will make a quick run from coast-to-coast with appearances in DC, Seattle, Portland, and LA, before making a very special tour stop in Mexico City. The Los Angeles show will be at Exchange, and I just get chills thinking about what an extended Boys Noize set would be like at that amazing venue. Check out the remixes for Mayday below and check out Boys Noize Warehouse tour this June if he just so happens to pass through your city.

Get your tickets at boysnoize.com/tour. 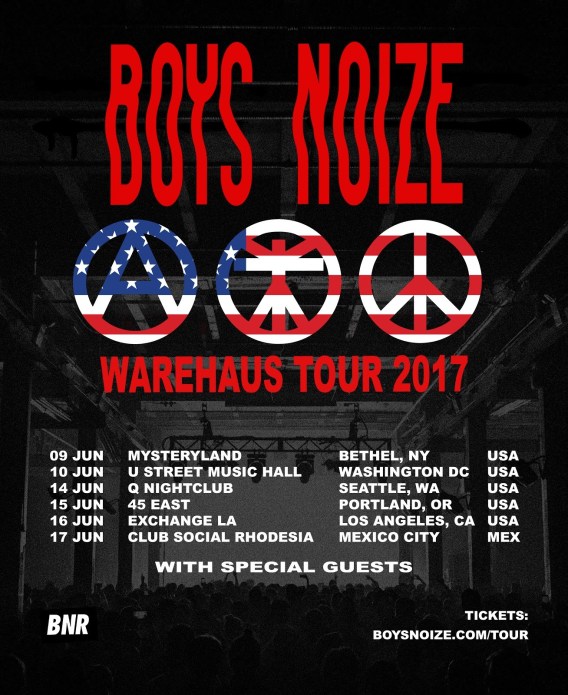 I am a Los Angeles native and lover of all things electro. You can find me in the middle of the crowd at the nearest festival. Hit me up on Twitter @Mark Fabrick IG @farkmabrick or follow me on Snapchat @markfabrick for awesome videos of shows, me driving, and my pug, Maple.