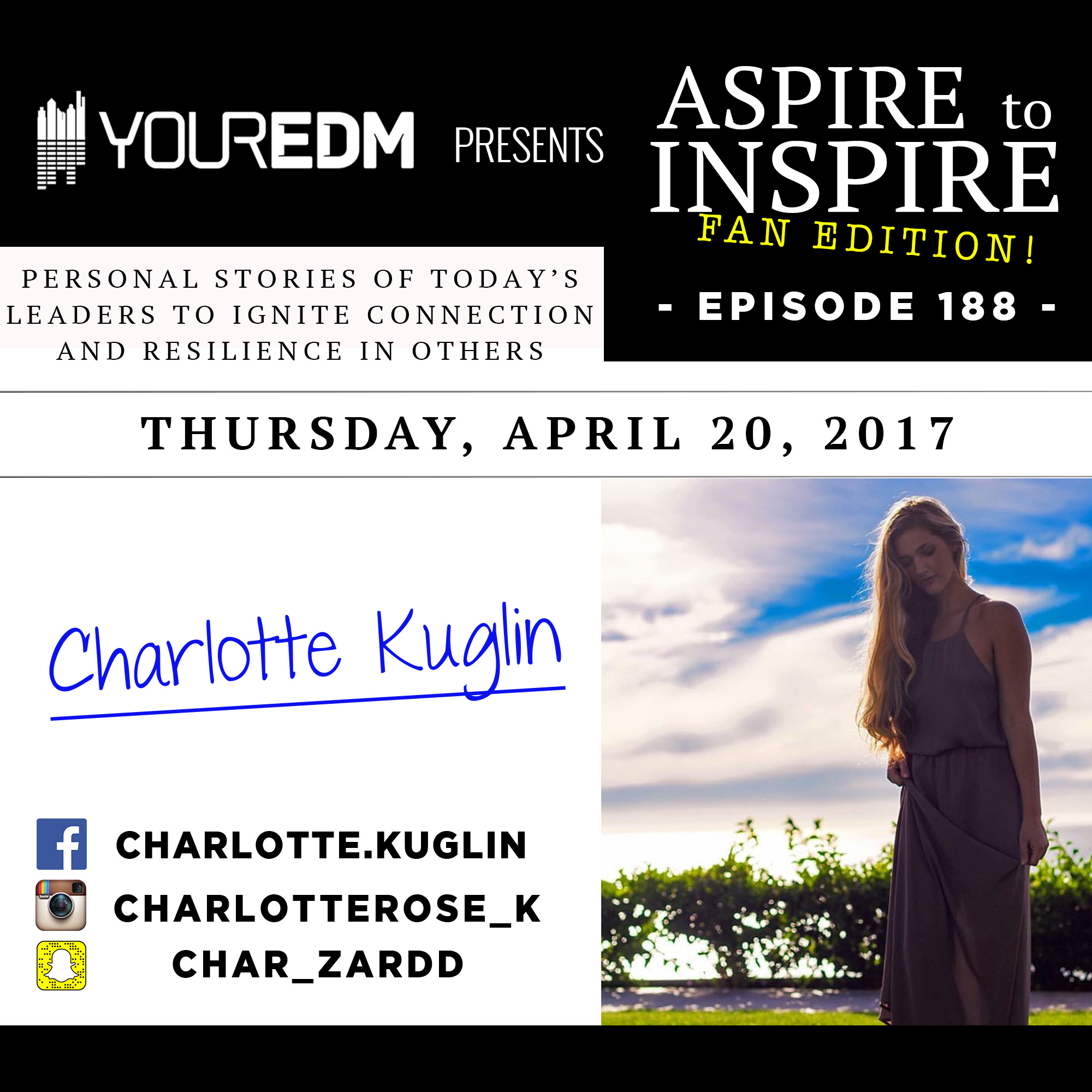 Addiction affects a lot of people in the U.S. Alcohol, tobacco, painkillers, opiates…there are so many addictive substances out there. For many people it can take a traumatic or life-changing experience to realize they have a problem and need to make a change. However, it’s what we do with our second chance that will ultimately define us. That’s the story of this month’s fan feature, Charlotte Kuglin, who battled addiction throughout high school and didn’t turn her life around until after a major car accident. Given a second chance, and more, Charlotte now leads a sober life.

“When I was a freshman in high school in 2006 ecstasy started becoming popular. I was already doing drugs pretty heavily by that age, so I started taking ecstasy quite often. On New Year’s Eve I had some older high school friends who were going to this rave called Together as One. They invited me and so I joined. This was way before they started carding…so I was just a little girl going to all these raves. I just really fell in love with everything about it – from the costumes and the dressing up, all the different people, the music, obviously the drugs – it just felt like there was a sense of camaraderie and I had never really been in that environment.

All through high school, my life pretty much revolved around drinking and doing drugs, and I really started to lose sight of the future…I managed to keep super good grades, I went to continuation school, so it was a little bit easier, but I managed to keep a 4.0. So I lived a “double life.” Everything was great during school hours, but then as soon as I left, the party was on, like every day. I remember going to people’s houses and just getting belligerently wasted, going to school the next day and everybody talking about it. I was about a month from graduating high school, and I was starting to think about my life and future.

Then I went to this party, we left, and I was in a blackout pretty much the entire night. This girl that I didn’t really know offered to give my ex-boyfriend and me a ride home. She was wasted as well, and she totaled the car. The side of the car where I was sitting took all the impact…completely crushed inward and I was trapped…and I went into a coma on impact. They had to use the Jaws of Life to pull the car apart and get me out. I was rushed into the hospital and my brain was swelling so much that they had to take a piece of my skull out right when I got to the hospital. My parents had to come sign waivers saying I was probably going to die from the surgeries that were trying to save my life. I was in the hospital for a really long time and my whole life changed.”

After being in a coma for three weeks, multiple surgeries and a ton of rehab, Charlotte was eventually released from the hospital. Although she had told herself it was time to make a change in her life, she found it wasn’t quite that easy and she was back to her old bad habits in no time. This time, however, she got kicked out of her house and started to lose everything. Eventually she did have a moment, and she knew the right thing to do.

“So I was released from the hospital in a wheelchair, and the first week out I started drinking again, while in a wheelchair, almost like I deserved to drink after everything I’d been through. My life just got insane. After the accident when I continued to drink, I started to lose everything. My family didn’t want anything to do with me anymore. I got kicked out of my house while I was in a walker. I was living with friends for a while and eventually they got sick of my shit too because I was like this crazy, disabled person. I was just a horrible friend. All I really cared about was getting drunk. I was still young so I didn’t have a job, a car, or any money…I was really out of resources. I thought it was completely unattainable to be sober. I’d been drinking and doing drugs since I was 12, I didn’t even know what that looked like. I thought maybe there was some way I could get sober, or I needed to kill myself. I did have a failed suicide attempt, and the next day, I don’t know what it was, God, or my internal self…something told me, ‘You’re not a mistake.’ Something hit me and I realized that I’m really not a mistake and that I do have a purpose. I really believe for me it’s serving other people because there’s so much I can do for others. Somehow I got sober. I called my dad because he’s sober, he checked me into a rehab, and I’ve been sober ever since December 1, 2010.”

Now Charlotte gives back to others through her work with Insomniac Consciousness Group. They help to provide a safe space for other festival-goers looking to stay clean. You can easily find their booth at any Insomniac festival with their warm tapestries and glowing lights. They often have meetings that are open to anyone looking to attend and learn more. For Charlotte she says it’s been an amazingly rewarding experience and she hopes that she can provide an example for anyone looking to get sober, a difficult process for sure.

“Consciousness Group gives me a purpose. Because rather than partying at the festival, my main goal is to serve others, but I do still have a lot of fun! I’m there to talk to people and to put a smile on someone’s face. We don’t try and push sobriety on anybody, we just try and be an example and show people that it is possible.

People ask us what we’re doing here; we’re a group of clean and sober music fans just trying to show people that electronic music doesn’t have to be centered on drugs. If you want to do that, cool, have fun, we’re not judging you, but there is another way if you need it. So we just try to provide a safe, sober place for other people who aren’t doing drugs. It’s been really awesome. I’ve been volunteering with them for about three years now.

There was this guy running across the field at Beyond Wonderland, and he runs up to our booth. We had a sign saying we had meetings at certain times, and he asks, “What kind of meetings are these, what is this?” I tell him we’re a group of clean and sober music fans here to offer support for anyone who needs it. And this guy breaks down in tears. He’s like oh my God, I cannot believe that you guys are here. I am two days sober, none of my friends are here, and I really didn’t know how I was going to stay sober this weekend. He came into our meeting and cried with us and it was super emotional and just crazy that he found us. He came back for the rest of the weekend and hung out with us. Stuff like that happens time and time again.”

Despite her struggles with addiction at an early age and surviving a major car accident, Charlotte says she’s always wanted to help people. She’s now more than six years sober and doing just that with Consciousness Group, while also being surrounded by the music and people that she loves. Charlotte shows that anyone can overcome his/her struggles with addiction. In fact, she says helping others is the best way to overcome that challenge.

“I’ve always wanted to help people, that’s always been part of me. I didn’t really know growing up what I wanted to do, but there’s always been a recurring theme for me of helping others. It’s been really rewarding for me spiritually to have the opportunity to be a helping hand in the music scene. A lot of the music scene is centered on drugs, drinking, and partying, but it doesn’t have to be about that. For me the music festivals are a spiritual experience alone. It’s not about me and what I can get out of it, it’s about what I can contribute.”

If you or anyone you know is suffering from any form of substance use issues or addiction, do not hesitate to act. Visit JED’s Mental Health Resource Center for information, resources, and tips for how to help yourself or a loved one:

Taking a screening can help determine if additional help is required. Visit www.mhascreening.org to take a free, confidential, and anonymous alcohol or substance use screen. Visit Mental Health America to learn more about recognizing addiction symptoms and offering support before and throughout recovery. Several global online and regional recovery support communities can be found here: