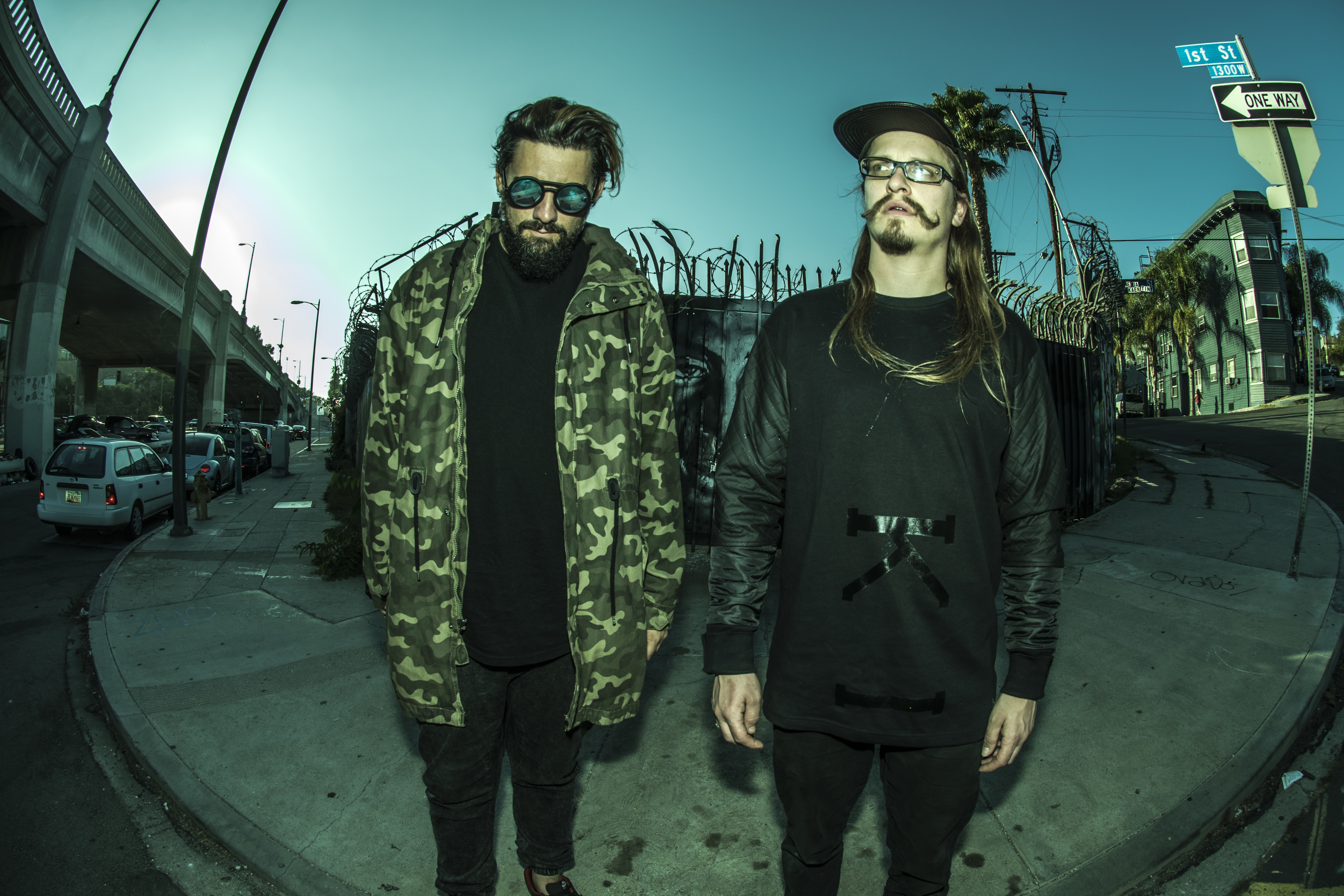 Your EDM Interview: Truth Talk Dubstep, Truth and the “Wilderness of Mirrors” [video]

Dubstep power duo Truth are about to release their fourth full album, called Wilderness of Mirrors on Disciple, with the next single from the album dropping to their Spotify playlist today, May 2 (playlist below). Although the album hasn’t been released in full yet, a very clear and evocative seems to be perceivable from the tracks that have been released thus far. Your EDM wondered if Truth had as clear of a vision for the album as seems to be present, and how they feel that have evolved their sound since beginning their foray into dubstep in 2009. Tristan and Andre answered these questions plus many more in a quite frank and deep interview this week, and it terms out that their vision and theme for Wilderness of Mirrors is even more interesting and cohesive than fans could have imagined.

Since you released your first singles on Deep Medi in 2009, you’ve done a huge number of singles with different labels, but only three LPs. How did you come to decide to release “Wilderness of Mirrors” as an LP?

You’re quite right, there have been a lot of singles and EPs over the years. An album is a very different undertaking, it’s an opportunity to showcase a much larger slice of yourself as an artist. A single is typically two tracks, picked by a label to fit their vibe. With an album, there is a lot more room to be creative.

We did actually have a rough prototype album quite soon after “Hollow World” was released, but we ended up scrapping it in favor of releasing the music as singles and EPs. At the time, we felt that the album as a creative unit had become quite overlooked and in particular certain album tracks just don’t get the love they deserve because of the nature of digital music. Listeners are free to pick and choose their favorite tracks, and why wouldn’t they?

About a year later, our opinion had changed. The album is still a very important milestone in a musical artist’s career. People truly do take notice of albums as a body of work. And let’s face it, we enjoy releasing music as an album!  Once we had decided that “let’s make another album” it was another 2 years before we were happy enough to say “this is it”.

It is true that singles rule nowadays, but it’s always nice to see when artists go that extra mile to make a cohesive long play. Was there a theme involved in “Wilderness of Mirrors”? There seems to be a number of elements that bind the tracks together. Did you see the LP as sort of a cohesive work in itself?

Yes of course! It’s very important that the album is a cohesive work in itself. You can take each track out of context and they hold their own, but to understand where we are going with this, listening to all the tracks in the correct order is definitely key.

To that end, was the name of the LP inspired by either of the “Wilderness of Mirrors” movies? What about the music?

The name was inspired by a term coined by a former CA director. He in turn was quoting T.S. Eliot in a poem called “Gerontion”. Basically the idea of a “wilderness of mirrors”, as he put it, is the environment in which there is so much information and misinformation that truth, half-truths and fiction cannot be distinguished from each other. Even the experts have no idea what is truly going on. It’s the world we live in.

Wow, that kind of ties in with your group name as well. Along the theme angle again, most of the tracks on “Wilderness of Mirrors” feature vocalists. How did you choose who you wanted to work with and how did you decide how each of the tracks went on the album?

There is quite a wide variety of vocalists and vocal styles on the album. That’s something we were certainly conscious of. For example we didn’t want too much of a grime influence, but 3 or 4 of the tracks have Grime MCs over our more “Truthy” instrumentals. Having the opportunity to work with the likes of D Double E, Jamakabi, Killa P and T Man…It was a no brainer to utilize this level of talent.

On other tracks, Strikez brings more of a DNB vibe. Ill Chill provides a slight hip hop flavour, while Lelijveld is pretty uncategorizable. She’s done a lot of dubstep tracks with us, but her sound is more trip hop or old jazz and soul than anything.

How did we pick the tracks? We made a lot of music, recorded a lot of vocals and made a big folder of music we thought could work on an album over a period of about 2 years.

Late in the process we took all the tracks we had and started to narrow them down to about 20 or so. From there, it was all about getting the right combination to give the vibe and feel that we were going for with this. We actually tried to narrow it down to 12 tracks, but eventually settled on 14.

“Soldier” is the next track to be released before the album drops on May 19. Any reason why this is the next single you want to debut?

It’s a really fun track that we have been playing at gigs in various forms for over 6 months. It’s a track that gets the dance moving and the vocal from T Man adds that extra energy on top. With these singles it’s all about putting the strongest foot forward and this seems like the right progression from “Endless Universe” and “Monster”.

This album definitely has its own feel to it, and seems style-wise to be an interesting next step for you guys. How do you see the evolution to “Wilderness of Mirrors” from when you first started with “The Fatman/Stolen Children” single on Mala’s label?

We’re just 2 guys who love making music and our sound (if you want to call it that) has evolved organically over time. We’re not fully in control of where it goes. When we first made Fatman and Stolen Children, that was probably the biggest stylistic jump we have ever made as before that we were making straight up drum and bass.  When we met Mala and he showed us dubstep, it was an amazing opportunity to strip everything back and look at production from a fresh perspective. Since then we have explored all over the dubstep genre and in the last 4 years have also made a lot of music at other tempos. It’s still us making it so it still has a certain vibe of course.

Which track or tracks on the album are you most excited about and, since you’re touring, which ones have you gotten the best reactions from audiences?

We are excited about the album as a whole. Couldn’t really pick any tracks out as they are all in there for a reason. At gigs the most noticeable reactions come from ones like “The Moon”, “Soldier”, “Monster” and “Lyrical Murderer”, But we aren’t always playing for the hands in the air crowd, the person in the back with their hood up nodding along is just as important.

Listening wise, tracks like “Echo Chamber” and “Inside Your Thoughts” seem to really stick with people.

Any fun stories on the current tour?

The rule is “what goes on tour, stays on tour”.

What are some things that inspire you to keep making dubstep?

There is so much that inspires us, but right now the dubstep scene is in a really good state. There’s a bit of a renaissance as far as the quality and quantity of the music being produced at the moment. That in itself is really inspiring.  Aside from this album which is being released on Disciple, we have our own label as well, Deep, Dark & Dangerous. So, we are constantly listening out for stuff that is fresh and interesting. It’s a great way to keep our finger on the pulse. The most interesting music is always going on in the underground after all!

What are you most looking forward to when “Wilderness of Mirrors” drops in full?

People’s reaction to hearing the album in full is the most exciting part. The album is coming out in a staggered fashion, so it’s not going to make complete sense until all the music is out!

Any music videos for singles?

The first video is for “Monster” and that just dropped middle of last week. The response so far has been phenomenal! We have 3 or 4 more videos coming too, all to be revealed in due course.

Anything else you’d like to say to fans or readers?

Go out and support your local underground music scene and producers.  go to a show, buy a track on Bandcamp, share the music. Every little bit helps and you never know who is going to start the next amazing musical trend!

Wilderness of Mirrors will release on Disciple on May 19. Check out below for the newest single of the album, “Soldier”.