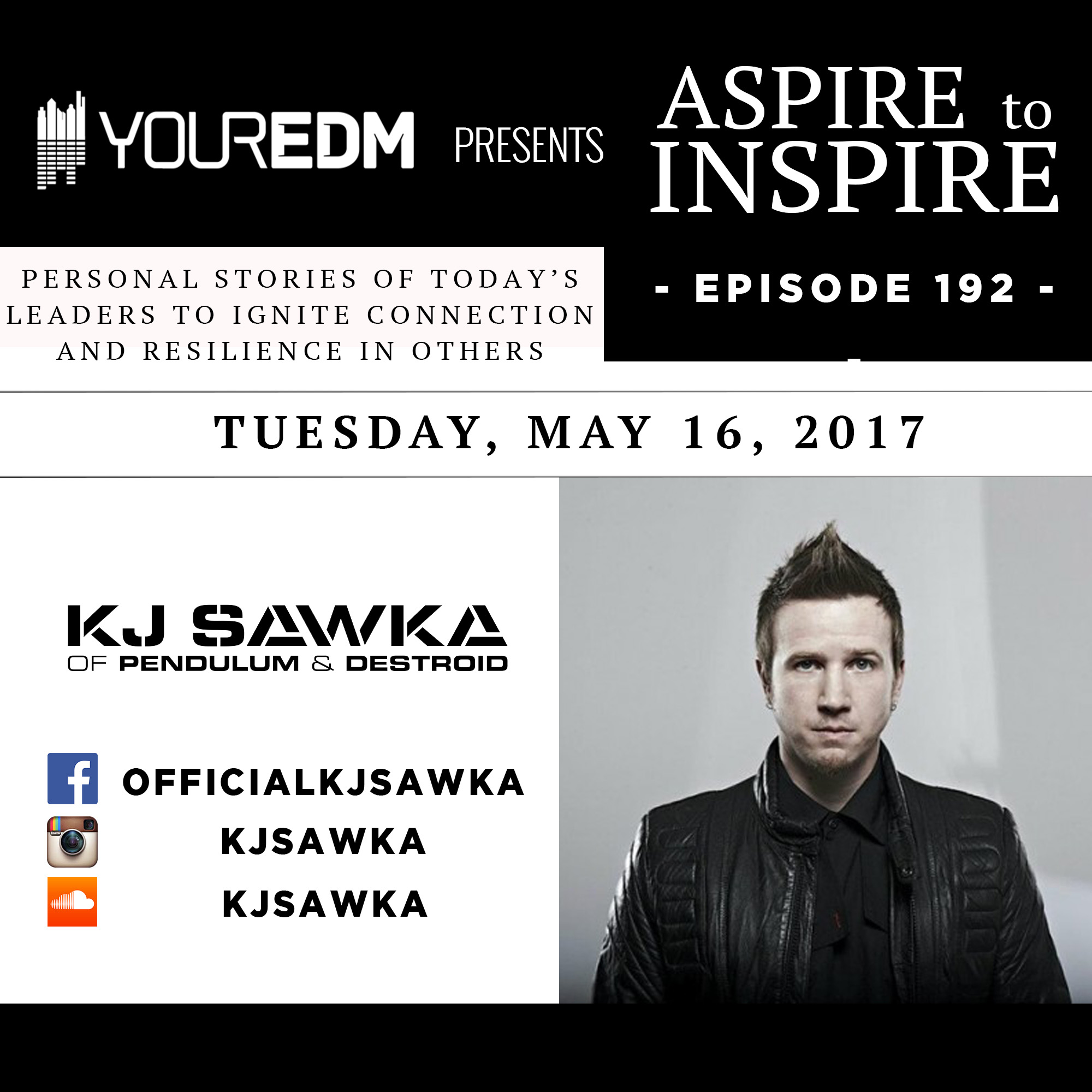 Every child has big dreams. Whether we want to be doctors, lawyers, athletes or anything else, we all seem to start out with the highest of hopes for the future. As we grow up, however, our passions sometimes begin to change or the paths to those young dreams become too hidden to pursue.

For some of us, the ultimate goal may change, but the drive and determination to achieve something bigger than oneself altogether never waivers. KJ Sawka (from Pendulum and Destroid), known throughout the music industry as one of the most talented drummers and artists in the scene, is a prime example of the light at the end of the tunnel when you pour everything you have into chasing your dreams.

Growing up in Seattle, KJ had big plans for the future as both a baseball player and a doctor. Before he got involved in music, it was all about sports. Unfortunately, KJ had cut his hand while working on a car when he was young, taking him out of baseball altogether until it healed. Once he returned, things just weren’t the same.

It was around the same time that KJ was given a drum set, which he instantly fell in love with. He practiced for hours on end almost every day of the week; constantly trying to push himself to get better and learn as much as he could about the craft.

Before long, others started to notice how much he had grown as a musician. He was eventually offered a full scholarship to Berklee College of Music, a rather prestigious jazz program, but there was something about that path that didn’t feel quite right to him. As much as he enjoyed being a part of the jazz band at his school, he often thought about how he would rather be jamming to a more contemporary sound with his brother.

“People were impressed with my drums – I was the best one at the school and best in jazz band. From other people’s reactions I realized that maybe I had something going for me. I jammed with my brother who plays guitar. We would play Iron Maiden, Black Sabbath, and Rush. I was super into Rush because the drumming was very complex. Then we got into grunge- Nirvana, Sound Garden, etc. When grunge became popular and Nirvana came up as a band from Seattle, I realized that was what I wanted to do. It was really inspiring to see people from our hometown becoming famous in music.

I had an opportunity to attend Berklee College of Music in Boston on a full ride scholarship. I turned it down to try to become a famous rock n’ roll grunge band member. I always think about whether or not I would have changed… Would I have gone to college? I always tell people to further their education and go to college, as long as it doesn’t sink you financially. I can’t say that I would change anything in my past, though. However, it did take me a really long time to become a professional musician. I had a day job all the way up until I was about 27 or 28.”

One thing that has remained a constant throughout his career is KJ’s drive. Even today, as a well-seasoned and highly accomplished artist, he still finds himself watching tutorials on new styles, practicing just as much, and pining over his projects until he feels they are ready. But, as many artists might agree, the struggle of doing those very things can be a heavy weight on an individual.

“It is a constant struggle; I’m never satisfied. I remade the songs on my most recent EP at least five times each over the course of five years. I was going to release them in some form or another many times, but in the end I’m glad I didn’t because I’m finally at peace with them. But that was a massive struggle. It gets easier, but I want to be a better musician overall. It’s never ending.

Traveling with Dillon Gates (ill.GATES) was really inspiring as well. His life motto is to have as much fun as possible at all times. He has really helped me to adopt that mantra, which is amazing, but it can also sometimes be difficult to understand. It’s hard to let go of worries in life, but musically, having as much fun as possible is super crucial. That’s where the true art is revealed.”

The idea of “true art” can manifest itself in countless ways from person to person, and KJ has found a way to incorporate all of the personal and professional obstacles he has faced into his craft. From the financial uncertainty of a career in the arts, to moments of depression, and even the impact of a childhood injury have played a part in the creative process.

“Depression is definitely real, but then again sometimes the best art comes from the most brutal struggles. If I didn’t have some pretty heavy relationship and band breaks ups I wouldn’t have the songs that I do today.

I also fell out of a pickup truck as it flipped over when I was younger and that was pretty significant. I took a major blow to the head and I feel it as I get older. Some tasks are just more challenging, especially when it comes to remembering things, multitasking, etc. I thought I was a good multi-tasker and now I’m just so bad at it. I can only do one thing at a time. I’m one of those guys that still watches tutorials to improve my craft…no amount of tools is enough.

Dillon Gates (ill.GATES), Rob Swire (Knife Party/Pendulum), Jeff Abel (Excision)…all of my music partners have impeccable memories. They can remember riffs, solos, specific keys of songs, and then I’m just terrible at remembering. I have even forgotten the names of some of my own songs. Sometimes I feel a little inferior when it comes to those moments of wishing I could remember certain things.”

Rather than allowing the personal struggles KJ has endured to take the reigns of his career, he has worked hard to find ways to stay on task and even the keel. With pages of notes on song keys, plugins to use, and more, he has figured out how to archive on paper what most artists have in the back of their mind. KJ is still one of the best in music at programming a “drum brain,” which contributes to his need for laying everything out on paper. In fact, KJ programmed the entire live Destroid show himself.

But what brings KJ the most joy these days is seeing other artists in the electronic music scene incorporate live music into their sets, as that is absolutely his forte. Being the drummer for the most legendary live act in dance music, Pendulum, KJ has high expectations for upcoming artists. If you haven’t yet seen Pendulum Live…they are launching their 15-date LIVE world summer tour starting with a headlining set at Ultra Korea June 10th…their first tour in six years.

“I definitely feel like I’m one of the people that has the ability to take EDM to the live stage; I always have. And every time I see a DJ/producer breaking out the keyboard, drums, or other live instruments, I get so excited. It’s what I’ve been doing forever so it’s amazing and refreshing to see more people try it.”

With high hopes that musicians continue to push themselves beyond their own comfort zones, KJ also believes that music can do so much more than we tend to imagine.

“I think the power hungry people out there are completely destroying things faster than ever before. We still have our Bernie sign on the lawn, haha. We’re holding on for dear life. I wish the average person could understand how money and greed is bad for the world.
But ultimately…I wish that there would be more music and more art in the world and just shove that down the throats of the greedy and rich people. Just sink their yachts with Beethoven.”