We discovered shortly thereafter that DJ Snake had also deleted or suspended his Instagram and Twitter accounts. And though we can’t actually see if his Snapchat is deleted, he hasn’t posted anything in the last 24 hours except for one final snap. In English, it reads, “You’ve disappointed me.” 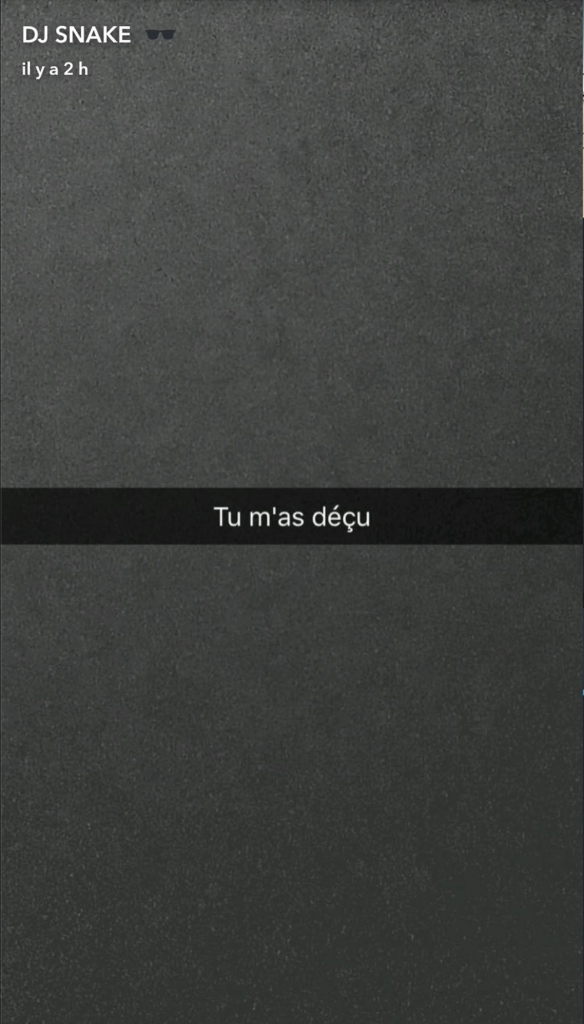 Some believe this is in reference to how the public and his fans have received the news about the lawsuit involving him and his song “Turn Down For What,” but we can’t really know for sure.

It might seem like all of this is coming out of left field, but that couldn’t be further from the truth. Days ago, Snake addressed the crowd at Mawazine Festival stating, “When you are on top, people are trying to bring you down. So you do have to prepare for this and be ready. All I will be doing is keep bringing those positive vibes. I do this for the fans because they show me so much love every day.”

Other DJs have begun voicing their concerns either about Snake directly, or about the internet’s apparent obsession with social media and Snake’s place in it.

Does anyone know what happened to DJ Snake?

Mercer’s tweet specifically could be referring to the rumors that Snake was arrested or received a DUI as a reason for his cancellation at Hangout. So far, no evidence has surfaced to support either of these rumors. The tweet could also refer to the lawsuit and the media’s coverage of it, or any number of other things.

As for where this story ends, we’re not really sure. Should we be like Laidback Luke and express concern for Snake and his well being? Or more like Florian, and realize that social media isn’t real life and he’s probably just fine? I guess that’s for each of us to decide on our own.

But as soon as we hear anything about Snake, we’ll be sure to let you know.

Middlelands Was A Magical Fantasy In Disguise As A Music Festival