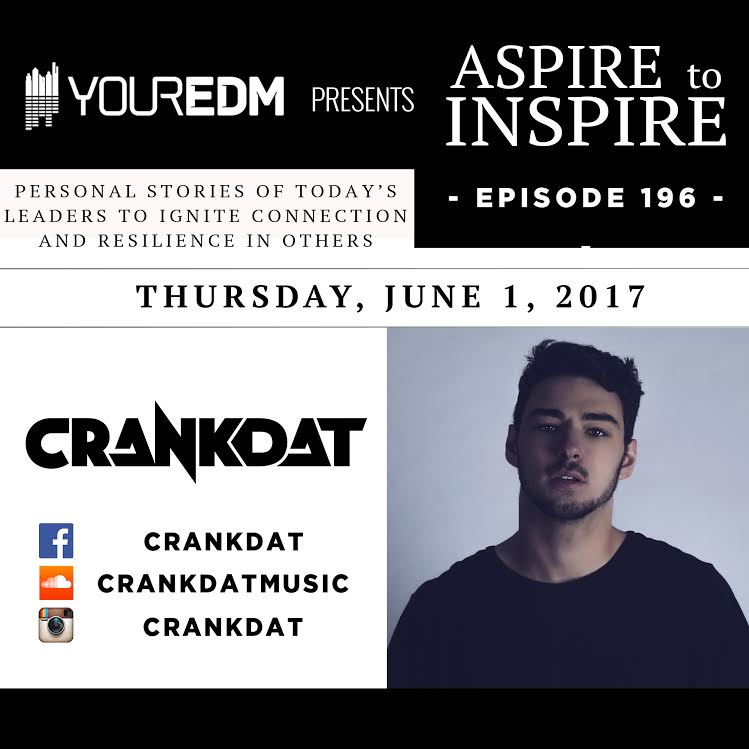 It’s always a challenge to take risks in life, especially when it comes to careers. It takes hard work, dedication, and passion to stick with your goals; and sometimes requires you to risk it all in order to reap the rewards. No one understands this motto better than Christian Smith, otherwise known as Crankdat, who despite recently dropping out of college to pursue his musical career, has already been “gearing up” to make a massive impact on the dance music scene.

At the beginning of this year, Christian was faced with a life-changing dilemma: drop out of school to pursue his love of music full-time, or stay in school and leave his dream behind. It was a difficult decision and despite being afraid of the unknown, Christian could not settle at the crossroads with the lingering thought of future regret. He therefore, chose to leave school and put his all into music.

“The hardest thing for me was making the decision to drop out of college. I was co-valedictorian in high school, and was on scholarship…so saying goodbye to my academic and athletic careers was not an easy task. I had spent countless hours training and competing as an athlete. The idea of throwing that all away didn’t make sense to me, not to mention all the friends I had made in the process. I thought about waiting until the end of the school year to make the switch to music full-time, but then wondered how my project would be impacted if I did that instead of making the leap at the beginning of 2017. This idea of ‘what if’ kept me up at night for about two weeks straight. I was glad to have my friends, family, and team by my side during this process, but knew it came down to me and what I wanted to do with my life.”

After making the decision to pursue Crankdat full-time, Christian immediately differentiated himself from others in the game by preparing a platform known as “Gearing Up” for him and his fans to connect with each other. Through this, Christian hopes to help people feel confident about their own personal battles, and help them to think positively towards their goals through his music.

“’Gearing up’ means to get ready and to get excited. I want my music to give people a positive outlook on life – one where they wake up every day ready to overcome their personal battles and tackle whatever goals they’ve set. I want my music to make people happy and to inspire them to be the best version of themselves.”

Since being faced with such a bold decision, Christian has been continually inspired by his fans, and enjoys talking with them about his music and how it’s helped them gain a more positive outlook on their own lives.

“I love talking with fans. It always touches me when people tell me how much they love my music and how it inspires them to chase their dreams.”

Even after overcoming the rather stressful and fearful choice of dropping out of school to pursue a risky career, Christian still has many remaining fears about being an artist in an ever-expanding industry.

“I have a lot of fears as an artist, but my biggest is being compared to other artists in negative ways. The only way for me to tackle that fear is to continue to develop myself as an artist, working towards finding my sound and solidifying my artistic vision.”

As for right now, Christian would like to see less of the “bastardization of dance music” in the scene, and wants to continue making genuine music that compels even the most naïve of listeners to dance.

“I’m watching a lot of other dance music acts start working with pop stars, but they’re not making dance music with these artists – they’re making pop! I want to see dance music become reinvented to cater to the mainstream audience, but I want it to remain dance music, and not be numbed down so much as to losing all of the components that make you dance.”

Overall as complicated as the decision was for Christian to drop out of school, his passion and love for music made it all very simple in the end…

“I love music. That’s what I want to do for the rest of my life. I had the opportunity of a lifetime staring right at me. If I decided to push it away or push it back, I’d regret that decision for the rest of my life. I was terrified, nervous and had no idea what my future had in store. At the same time, I felt a huge weight had been lifted off my shoulders and I could breathe again…I’m inspired every day by people that use music as an aid to conquer their day. I just want to make the music that fuels their fire!”

Although it may seem scary to move forward into an unfamiliar territory, just remember…GEAR UP!