Glastonbury Is The Most Popular Music Festival To Have Sex At

by Andrew
in EDM News, Events

England’s Glastonbury Music Festival tops the list of the most popular music festivals to have sex at. A third of the people that attended the festival admitted it’s the best place to have sex with someone new. 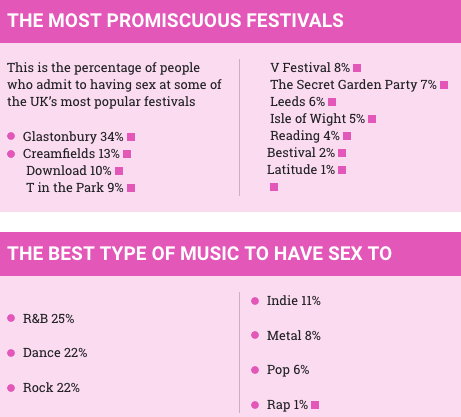 More than 1,000 people were surveyed by sex toy retailer Lovehoney ahead of Glastonbury festival. 40% of festival goers believe that having sex is simply part of the festival experience. About 60% of people said they were more likely to try new things sexually with their partner while at a music festival.

The most popular location for having sex was a tent, followed by a car, a quiet spot in a field, and even a portaloo and in the crowd. Only 8% of those surveyed said they would not consider having sex at all at a festival.