It’s hard to believe that Xcellerated is only turning four this year. Because of the epic lineups this growing drum and bass outfit has been bringing to Los Angeles, it feels like it’s been more like a decade. Age ain’t nothing but a number, however, and what’s important is the sick lineup and three rooms of sound Xcellerated and its partner Get Heavy have come up with for this anniversary bash at Union in Los Angeles.

As usual, Get Heavy will be hitting the front room, with some characteristically heavy dubstep, trap and experimental sets by Geo, Sweet Tooth, Slimez and Atomski. There will also be a mystery guest set to be announced.

The circle bar and the main room will both be hosted by Xcellerated. The circle bar will be all local talent including local legends Apx-1, Scooba, Destro, G’Dubn and Reen. The main stage features more local talent with Construct and Rawtee opening and liquid legend Flaco. Then the UK talent picks up the main room with DJ Ruffstuff of V Recordings, Multi Function’s Jayline, a U.S. debut from June Miller and an exclusive and very rare drum and bass set from Funtcase.

As far as bass-heavy lineups go, Xcellerated has gone all out for their four-year anniversary. Come celebrate with them tomorrow, 7/15 and show love for their amazing contribution to the bass music community! Tickets and information on the Xcellerated 4-Year Anniversary event page. 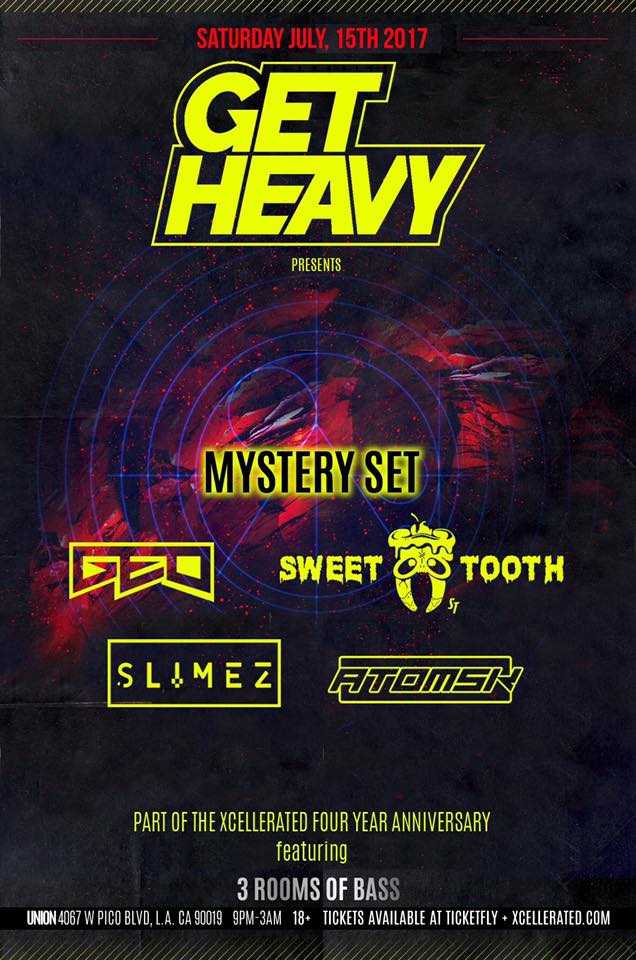