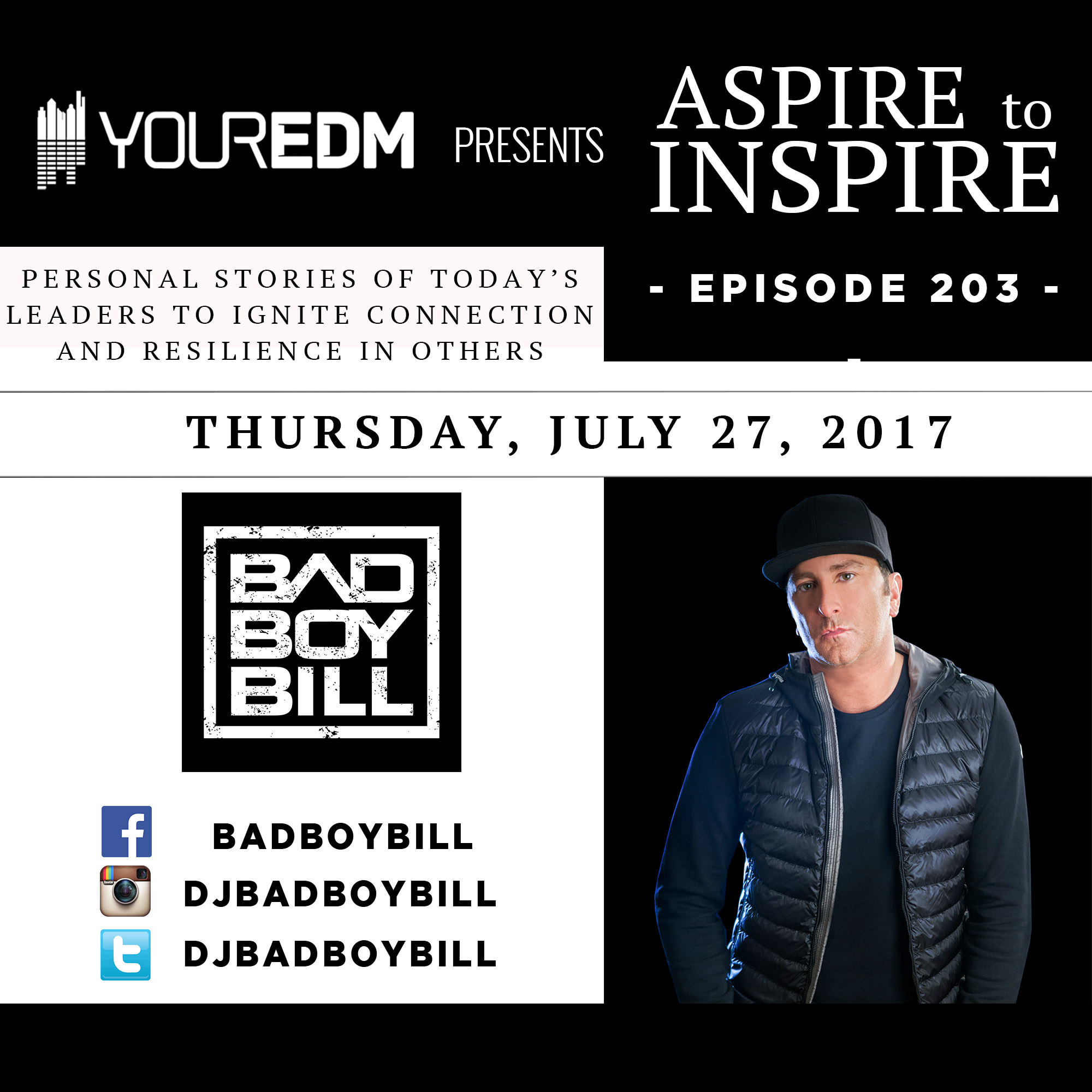 It’s no secret breaking into the music industry is a tough proposition. However, longevity might be even more difficult odds. You have to adapt and evolve in order to stick around. This is part of what has made William Renkosik, better known as Bad Boy Bill, so successful since the mid-80s. He is a legendary producer and DJ who originally broke through as a radio DJ when house music literally rose from the ground in Chicago. Later becoming the first American DJ to legally license and release mix tape compilations and being ranked in the DJ Mag Top 100. Additionally, he has found himself great success behind the scenes as a founding partner of Beatport and legendary Chicago record labels, Moody Recordings and International House Records.

While only a senior in high school, Bill was already playing mixes on Chicago’s airwaves and playing multiple gigs at local clubs. Bill discovered DJing and immediately found his passion and calling…he’s never looked back.

“I just started out DJing in high school and local parties. I ended up getting on the radio doing a mix show in Chicago when I was still in high school. That broke my name throughout the city. I started doing mixtapes and mix CDs, and selling them out of the trunk of my car. I started a company and started putting out legalized mix CDs and compilations. All the while I was constantly buying studio equipment and producing records and mixing. It’s just always been a passion of mine since high school. It was something I loved to do – the art of taking two records and mixing them together and scratching was so fun. I think that’s the key…finding something you just love to do, where it’s not really practice, it’s just something you enjoy doing.”

For Bill success came early, however, he grappled with a struggle that is very common among any American youth. What should I do with my future? Follow a passion, or go the traditional route to college and pursue something more conventional? This was a decision Bill struggled with, but he’s happy he went the career route. As a veteran in the industry, Bill says there is no substitute for experience. Mistakes are going to happen, and he and his business team have always learned on the fly. Adversity does build character.

“I got accepted to a bunch of schools for college, but I was already on the radio. I started my record label when I was a senior in high school, and figured I better stick with music because I really didn’t have time to do both. I was booked like 3-4 gigs a weekend while I was still a senior in high school. I was getting booked a lot and so I never went to college. Everything I learned about business is through experience and a lot of times you have to make mistakes to learn. At our company we say figure out how to do it, make it happen yourself, and that’s what we did. You make mistakes along the way, but you learn from them. It was especially difficult when we started the company, doing mix CDs and compilations and cassettes and licensing. It’s a lot that you have to learn about the music industry and music business. It was the same thing later on when we started Beatport…we had to learn how to do it. We had to figure out how to convince people to give us WAVs and sell them online.”

By the time most of us were figuring out what we could fit into our dorms, Bill was DJing on Chicago radio, selling mix CDs out of his car, even landing on Billboard’s Dance charts at the age of 19 with his remix of Dada Nada’s “Deep Love” and then again at 24 on Billboard’s Top 100 Chart with his song, “Yolanda” that he co-wrote, produced, and mixed for his group, Reality. Certainly it was a different time, but like other local Chicago DJs, Bill was driven by a passion for music. You didn’t DJ to become famous; you did it because of a deep passion for music. You would go to record stores and dig through crates to find songs. Bill did that and he says it was an incredible time.

“It was an exciting time because it was kind of the start of house music as we know it. Local DJs and producers buying drum machines and trying to create this sound that was based off of disco, but it was electronic taking influence from Kraftwerk and Giorgio Moroder. So this unique sound was coming out of Chicago, then hip house came along, acid house and all these different genres. Seeing it start from the beginning and then watching it evolve, it’s really a global sound. It’s insane…you weren’t getting into DJing to become a star or for money or fame. You loved music. You had to love music, because you were at the record store digging for songs. So it was a different era.”

Music, especially dance music, has an amazing power to bring people together. That’s another part of the job that Bill loves – he gets to have a huge impact on people’s lives. Especially when he was on the radio, he would get calls from listeners thanking him for getting them through a difficult time. Again, if you’re passionate about what you’re doing, it really shines through. It’s clear Bill loves what he does, and he relishes the opportunity to leave a positive impact on people. If you’ve ever been to a show, you know the feeling.

“When I think about house music, and music in general, it breaks down color barriers. People from all backgrounds come together. I think a lot of times through music you can break those walls down.

There’s countless people that come up to me and have told me that me and my music got them through a tough part of their life. All those stories are what really inspire me. Especially when I was on the radio…these are major stations, like millions of watts of power. You don’t know who’s listening and how it’s impacting them or how important it is for them to hear your music and what it means to them. When I hear those stories I’m blown away.”

For all of his success at a young age, Bill says it took almost a full decade for him to really take a more professional approach to his career – to start having a vision of what he wanted to accomplish and how. Bill actually credits the motivational speaker, Tony Robbins for inspiring him to not just be a DJ/producer/businessman, but to be better at his craft, and to strive for more. Like most all of Bill’s decisions, it’s paid off, and he’s doing better than ever now. He hopes he can pass it on to others as well.

“I don’t know if a lot of people know this…I think it was around 1997, I actually did a year of different events with Tony Robbins. I went to Fiji for a week and went to Hawaii for 10 days. I had never written down goals, I was pretty successful in my career up until that point, but then I really started taking it more serious, I started really trying to plan out what I wanted to do. That type of stuff inspired me to become a better person, a better producer, a better DJ, to expect more from myself. I hope people look at that as inspiration to do the same thing. That’s how I think it’s passed along…if Bill can do this, I should be able to do this too.”

There you have it. Through hard work, determination, an open mind, and a willingness to adapt, Bad Boy Bill has maintained a successful career as a DJ and producer for almost 30 years. All this without ever having gotten full of himself or losing his passion for what he’s doing. Bill’s advice for aspiring producers and DJs is to…

“Be amenable to change, keep track of goals, and just get out there and do it. Don’t worry about scene politics. Music changes over time, do what makes you happy.”