As of Monday morning, Gary Richards has since officially confirmed his involvement in LiveStyle as President of LiveStyle North America per LiveStyle President/CEO Randy Phillips. Phillips had this to say about the hiring.

“When Chuck Ciongoli and I took over the former SFX, the global leader in electronic music festivals and the parent company of Beatport, we rebranded it LiveStyle to signal that a new vibrant business was emerging debt-free with some of the greatest assets in the live entertainment industry. To complete our executive suite,
we wanted to bring some real authenticity to the management of LiveStyle, and no single candidate to be the President of North America fulfills this role better than Gary Richards, of HARD and Holy Ship fame. In fact, this is a delayed goal for me since I tried to make a deal with Gary 10 years ago while I was running AEG Live. Not only is he an accomplished working DJ (DJ Destructo), he is a very astute businessman with an affinity
to his fellow artists. With Gary on board, LiveStyle is prepared for creative and strategic growth in the years ahead.”

While the SFX saga has been behind us for awhile now it’s successor lives on, quite successfully so far mind you, rebranded as LiveStyle. Following Robert Sillerman’s disastrous run as CEO, SFX declared bankruptcy with Sillerman stepping down and allowing for new leadership to take over as the company rebranded in the hopes of a fresh start.

One such move seemed to be plucking top-level talent buyer Gary Richards, whom you may know as Destructo, from Live Nation early last month. Industry sources fingered LiveStyle as Richard’s new home following the expiration of his five-year contract with Live Nation but it’s only just now that he’s officially confirmed it in several social media posts.

Yesterday, he tweeted a photo of Electric Zoo’s main stage and confirmed that he would be running that festival, among several others, in a follow-up tweet which has since been deleted. 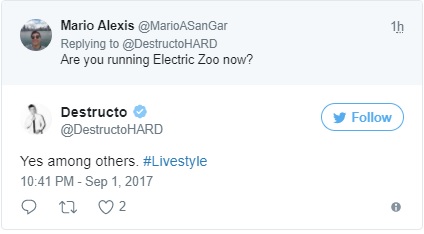 A look at LiveStyle’s website tells us that they produce several other festivals globally – mostly co-produced by React Presents or Disco Donnie Presents – including Mysteryland, Life In Color, Defqon.1, Awakenings Festival and more so we’ll see if Richard’s reveals what other projects he’ll be working on soon. With his experience from HARD Events running the undeniable success that is Holy Ship! among others, perhaps we might see LiveStyle expand into a cruise-style festival soon as well.