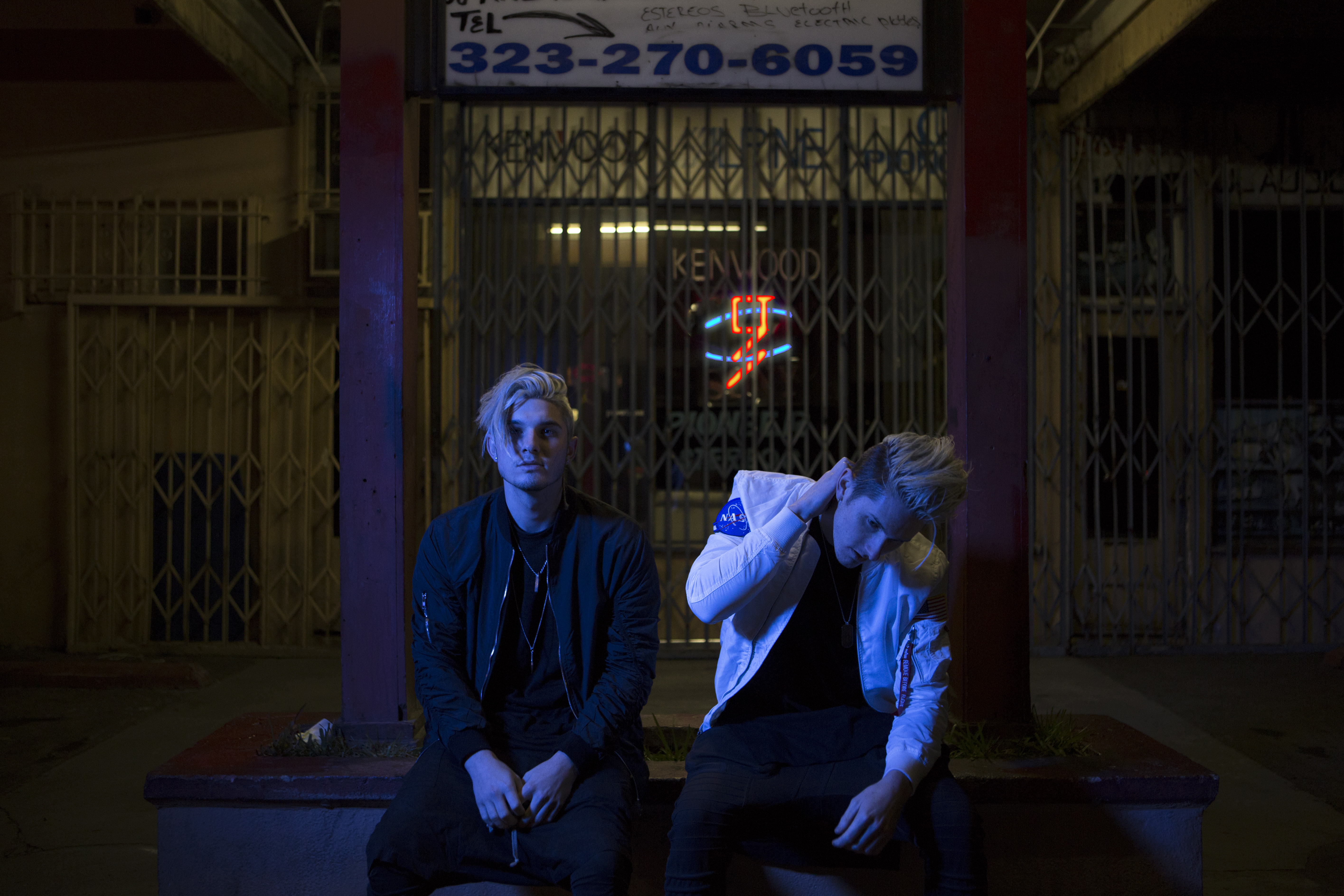 It’s been a little while since we’ve heard from the brothers Grey. “Crime” is the perfect way for them to break their silence featuring vocalist Skott and the signature organic sound we’ve come to crave from the duo. This exciting new single comes with the news that they will also be releasing an EP sometime this month titled the Chameleon EP.

I was able to sit down with the duo at Electric Zoo to talk about the EP, the single, and what has been going on in their lives recently. We spoke about the upcoming tour with Zedd, their production style, their favorite colors, their experience as members of a drum-line, and so much more. Check out the interview and song below:

How do you feel the set went at EZoo?

Michael: I think it went really well. Every show always feels like it’s a bit underwhelming just cause we’re perfectionists. But when we here our friends, fans, and manager say it was really good then it’s really fun.

Kyle: We finally have the right team I think. For awhile we were struggling to find the right people to help us do everything like visuals and lighting and all that. But I think that’s good now.

Michael: We’re excited to take it on tour and refine it. Right now it’s kind of weird having the live setup behind a DJ booth because people can’t see everything. They don’t know I’m playing piano or they don’t know when certain things or going on. So, once we have it all set up to where everything is visual, it will be great.

Are you taking this live set up on tour with Zedd?

Kyle: It will be like that [how it was at E-Zoo], but like Michael said, we’ll be more exposed. We’ll be out in front of the DJ booth.

What are you most excited about going on the tour with Zedd?

Michael: Honestly I’m just excited to play to fully packed out crowds just to show our show to. It’s nice when there’s already a fan base that’s there that’s already hands on. They obviously already like a lot of remixes too since we did a lot of work with ZEDD, so it’s fun to be able to show our music. We’ll also be playing some music that’s off of our new EP that’s coming out.

Kyle: Yea, I was going to say we have a new EP that’s coming out. I’m excited that we’ve been working on it for so long and we finally get to play it for all these people.

Michael: So far we’ve been playing it…I mean one of the songs we made a year and half ago, so we’ve been playing live and they don’t really know them because they’re not out yet so people can’t really sing along yet. For us, we’re hyped on it, but the fans are like, “I wonder what this song is…”

So it’s the Chameleon EP right?

And you guys are going to branch out from your normal sound is what I’ve heard?

Kyle: A lot of our remixes have this certain theme like Do You Remember and Disarm You. So I’d say we’re diving into those themes. The heavily guitar driven, crisp, organic type thing.

What do you guys feel has been your biggest challenge with your career?

Yea, you guys had a really quick come up after your remixes got recognized…

Michael: I think the two most major things…I think a lot of it is recognition because of how the Starving thing went down. People didn’t really know who we were. We skipped the whole fan base thing of having our own work out, having an EP out, and then doing a big radio single. So, having people know what we did and even having them know that we’re connected to Starving…that’s one difficulty. And then some of the actual components of our live set. For instance, one of our rigs just bent in half because the people just threw it in the airport. Just getting all that right is very difficult.

Kyle: In my opinion our biggest struggle is that Michael and I came from a very technical background in that we listened to technical music. Like technical metal. Like Dream Theater and stuff like that; and we were both in drum-line growing up. So we are deeply into the complexity of music that it’s hard for us to know how to dial it back and to make things simple. Because to us simple is still too complicated for a lot of people. And rightly so. So I think that’s the biggest struggle and that’s the thing that’s on my mind constantly now. Trying to figure out how to step outside of your own experiences and realize that just because something is simple for you doesn’t mean it’s actually simple; and how to make it truly as simple as it can be. It’s super hard.

It’s hard because you do have that very complex sound. Yea, even with Starving and I Miss You, even those you still have that complexity.

Kyle: Yea, they still have that complexity! But that’s as simple as we can go. We’re going to keep working on it though.

Michael: We were just talking to Drew of The Chainsmokers a couple nights ago and we were asking him like, “how do you keep everything so simple?”

They got it down.

Michael: Yea, they got it down for sure. It’s great.

Kyle: Yea, so that’s something we’re going to keep working on.

So you mentioned you were both in drumline. So you both play drums. Do you play any others? I know you [Michael] play piano [as seen in their performance].

This might be a silly question but, what’s your favorite color?

Michael: Haha. I think if grey was a color, it would be it.

Yea, I was going to say grey is a shade haha…

Kyle: I think it has to be some shade of red, like maroon. Or some kind of dark red.

Michael: I would say crimson. I’ve been annoyed because everytime I say the word crimson, someone always says, “oh like crimson chin from fairly odd parents.” And I hate having those two things coupled; it bugs me haha. So I can’t even say crimson anymore.

I feel like that’s not even crimson even, it’s more red haha. That’s a throwback though, I haven’t thought about that in a minute. But, in all seriousness what is the story behind your name, and even your symbol? That’s a very unique way to write the g.

Michael: Kyle was like, “we should fuckin’ work together on some music.” And I said I was down. We were both already working on music before. Then we were thinking of what would be a super dope name. And I thought about it for a couple months. I really wanted to think of something cool. We’ve both had projects before that were never the right name. You’re never like perfectly happy with it. And then I was just thinking, “what’s something that’s really simple.” I had already died my hair this color and I wasn’t really thinking about it and I think I was like, “does anyone have the name Grey.” So, I looked it up and no one really had it. I thought that that was pretty crazy. I got the SoundCloud link somehow and was like, “sick, that’s perfect.” And then we just went with that.

Then we needed a logo. I spent like a month…I knew I wanted something iconic and simple. It was funny, I drew all these different ideas of what I wanted the logo to be. One of them was just two triangles. And then later on, it became our logo with the little thing on the g. But later on I was going through kanji symbols trying to find a way to type out our logo with an actual symbol online and I found the little triangle thing and I was like, “that’s what I drew! Dope, I’m just going to use that.” I looked up what it meant and it means something like ancient slight of hand magic and I was even more excited. So we just used that as our logo online and stuff.

Like you mentioned earlier, you both have had your own projects. Do you think that has helped you craft your current sound at all? Or do you think you created your own sound for Grey? Do you think those previous projects influenced you?

Kyle: I think your past always influences you, but we tried to make it sound really different from anything either of have ever done.

Kyle: And the things that we thought were weird and cool and that we weren’t expecting other people to like are exactly what other people like about our music. Like the acoustic guitar stuff in our Where Are You Now remix and stuff like that. People responded to it and it was weird. We were just doing it because we like that stuff.

Michael: Yea. We thought, “yea this is weird” and we doubted anyone was going to hear this. But then people were like, “this is sick! You have an acoustic guitar in an electronic song.” We were like, “cool!” That’s kind of what we dove into for the EP, too. We just wanted to try to put more acoustic and more crazy elements into the tracks.

Your most recent remix was kind of housey.

Kyle: Yea, One More Night. Yea, it’s a bit of a different style. We just wanted to make something really happy.

Will we see another housey track on the EP?

Kyle: No, it’s not really our strong suit. I don’t think it shines as much.

Michael: I think we like darker music in general. More Radiohead-y vibes.

Kyle: It’s cool to experiment with that kind of stuff once in awhile because I like a really feel good track too. Like a Galantis type of thing, but I just don’t think we’re as good at doing that.

Michael: Yea I think the EP…

Do you have a release date?

Michael: Can we say the other? No we can’t.

Kyle: We’re not allowed to say, but it’s this month.

Kyle: We’ve been saying that forever.

Michael: There have been people on twitter quoting us saying, “100%, sorry this is the last time saying it, it will definitely be out this month.” And then like, “it’s been two months after that bro.”

That’s how it goes. You have to perfect it. There’s always that one last thing.

Kyle: And then even when you’re finally done, your team is like it’s going to take us two months to release this.

Michael: And then artwork and all that stuff.

Kyle: But it’s actually coming out this month.

Is there going to be a lead up single at all?

Michael: That one is sooner haha.

Check out some photos from the interview below: