Xcellerated is fast becoming a drum and bass destination in Los Angeles over its four-year tenure, and with lineups like the one at Union tomorrow, September 9, it’s easy to see why. This time around it’s special, however, because Xcellerated has teamed up with the Belgian party promotions company, Invaderz, for their killer lineup.

Invaderz are probably best known as a company for the Invaderz Festival, which usually takes place at the end of August. The company teams up quite often with Skankerz, who handle the other bass music styles. For this edition of Xcellerated, the party will mirror this program, with Invaderz and Xcellerated having formed the drum and bass lineup in the main room and Skankerz and LA’s Hostile picking the lineup in room two.

The main room is headlined by 6-deck set from UK artists and INvaderz favorites Hedex and Blackley and will also the U.S. debut of Premium. A B2B set by Aweminus and Replicant rounds out the main room – almost. There will also be a special surprise guest and the evening will be hosted by MCs Dino, J-Tec and Werd.

Xcellerated is also known for being one of the few 18+ bass music venues in LA, and a second room of boom will be hosted by Skankers and Hostile, featuring Bloodthinnerz, Omegamode, Berrix, Sweet Tooth and Haunta. The word on the street is that room two will also have a special guest, so stay tuned. 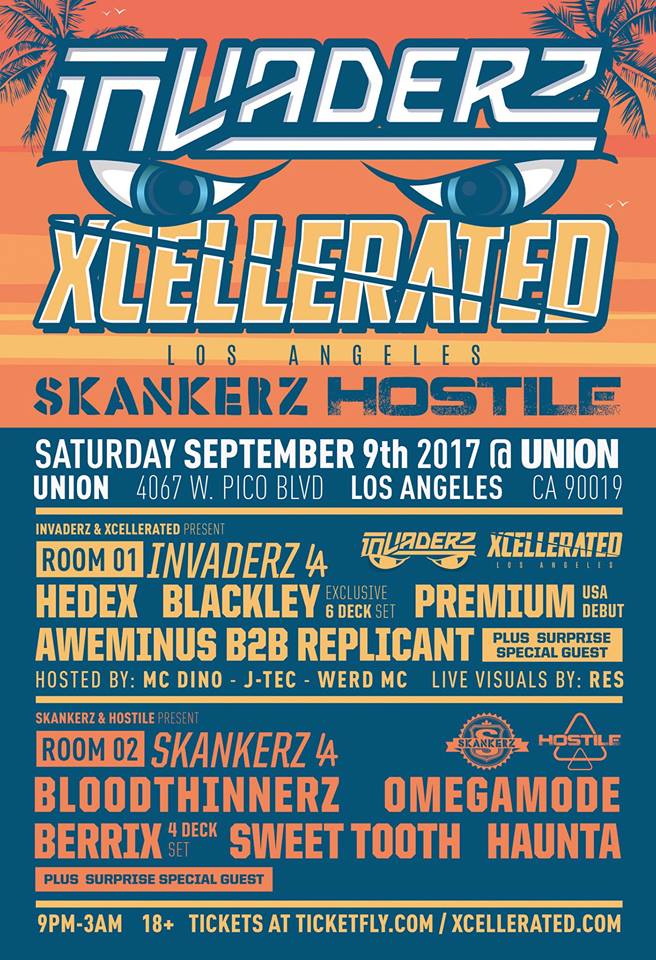