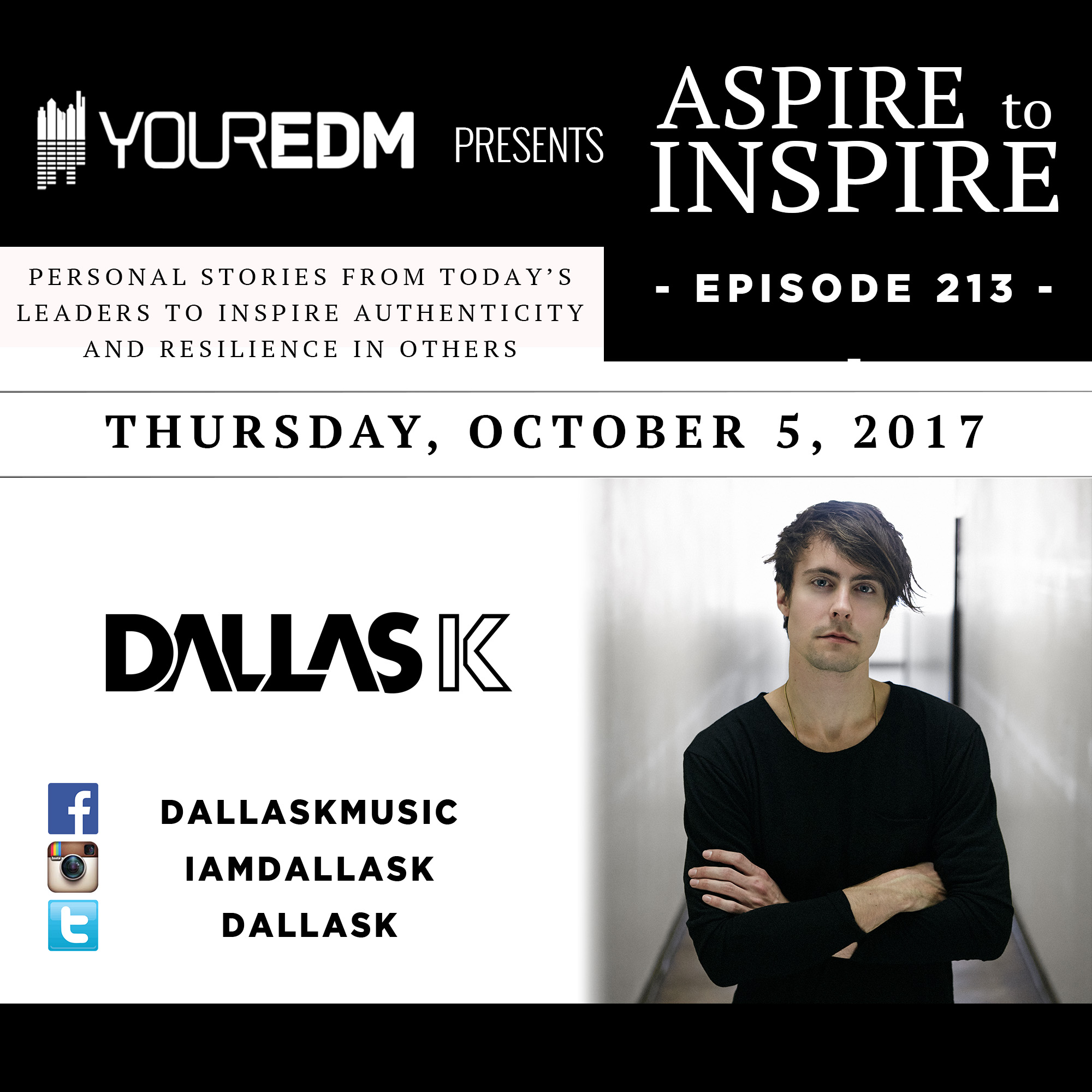 Life comes at you fast, and it can get really easy to become complacent and let opportunities pass you by. Many observers might think that once you’ve made it in the entertainment industry you’re set for life. Nothing could be further from the truth. In order to stay at the top of the game, you need to work to keep up with the Joneses while, at the same time differentiating yourself from a crowded field. This often involves a lot of personal growth and change…such is the case with Los Angeles-based producer/DJ, DallasK. While Dallas started making one style of music, his ears opened up to new sounds once he mastered producing.

“I used to only be concerned with making songs for the club, what would work well live, what would feel cool to play. Now, after having been introduced to the world of songwriting through my experiences in LA, I have a different perspective. One message that I still like to convey is “to have fun.” I can write emotional songs that are as grand of an idea as someone’s whole life, or as small as a fleeting moment, and those are great, but at the end of the day, I think what moves me the most is music that is fun, and fun to listen to.”

Like so many aspiring artists, Dallas was not sure which path to take right off the bat. While he had a vision for his sound as an artist, he was wary of forging a different path of his own. However, once he stepped outside of his comfort zone, he found that a whole new world of music and production opened up to him, including the opportunity to produce a track for Fifth Harmony. Now Dallas has a whole new perspective on where he sees himself headed in the future.

“When I moved to LA after I started touring, I signed a publishing deal with Prescription Songs as a producer and songwriter. I was able to meet some of the most talented writers and producers, and essentially threw me into the deep end of a new world I knew almost nothing about; writing and producing songs for other artists. I’ve been able to find my way in it, producing many records…most notably a record for Fifth Harmony that was certified 5x Platinum in the US earlier this year. I’ve had the privilege of working with some of the biggest stars in the world and also seeing a different side of music that I didn’t know before. Where I see my career headed from here is to merge those two worlds – being able to write and produce records that still have my same production aesthetic and I can play in my sets, but are a new DallasK sound that is more vocal-based.”

For Dallas, burning out early was something that was seriously at play. Though he made plenty of money as a touring DJ and club promoter, his work ethic eroded…so much so that he was on the verge of having no money to his name. However, he persevered and as a result, obtained collaborations with dance music luminaries like Hardwell, Tiësto and KSHMR. Everyone in this business has talent, but talent will only get you so far if your work ethic isn’t up to par. He can attest to that and he says he’ll never think twice again about how lucky he is and how much work it requires to stay relevant.

“There was a time after I had moved to LA, after I had been touring and making more money than I had ever imagined where it stopped coming in and I was completely broke. Everything had come to me relatively easily at that point after I had grinded it out as an open format DJ and club promoter in Orlando. When I started touring and making money I became super comfortable. I realized quickly that my work ethic was complete trash and I had been wasting so much time on things that didn’t matter. It was the biggest eye opener and is honestly what I attribute to me being where I am today, To make this work you can’t treat it like any other lifestyle, you have to live and breathe music, and I forgot that when I moved to LA. Trust me when I say I’ll never ever forget it again. Not many people are lucky enough to do this as their full-time job and I never take that for granted for a second.”

Yes, Los Angeles is where everyone moves to make their dreams come true, but it’s really easy to get distracted from your goals in such a vibrant city. Whether you’re a world famous producer and touring DJ or just a working mom or dad, work-life balance is key. You need to find a way to maximize your time and effort.

“I love LA for its opportunity and the community of creatives that reside here. It’s truly unparalleled, especially in the music space. I hate it for some of the same reasons. Sometimes it can be hard to focus on creating when there are so many viable uses of your time. There is always a meeting to take, someone to see, a party to go to, the list goes on and on. For someone to be successful in any creative field, you have to stay in love with the process of creating, and LA makes that difficult at times.”

Happy in his life and in his career, DallasK is making his mark on the music scene and doing his part to help people get through tough times and hopefully inspire the next generation of artists. He says he hopes his experiences will help others get through their own journey whether it be down his same career path or a different one. According to Dallas, the world would be a much better place if we could all just acknowledge and value one another.

“I think a great number of the world’s problems stem from people feeling as if they don’t matter or that they aren’t being heard. I wish people would take more time to listen to others. When we do, we realize there are far greater similarities between us than we ever assumed. Life is a process, and I hope to improve my own skills in active listening and trying to learn from other people, rather than waiting for my turn to speak. I hope I can encourage others to do the same.”