Will Sparks’ Team Lifted Animator’s Video Scene For Scene Without Permission, Here’s How He Responded

There’s a fine line between omage and straight up stealing content. For Spinnin Records and Will Sparks’ team, that line was clearly crossed when they chose to rip animator Jonathan Ng’s short, Requiem for Romance, for his song “Take Me.”

In a now-deleted tweet (in fact, the user’s entire Twitter page has been removed), a user named Three Heads claimed that he was the designer for the video, and worked with Sparks and Spinnin Records in creating it.

Ng says that “no one from the label contacted him prior to posting the video, nor was any permission received.”

The video was released on September 4 via Facebook and YouTube, though it wasn’t until 10 days later that someone noticed the video and that it was identical to Requiem for Romance.

According to Cartoon Brew,

“The next day, September 14, Ng was contacted by Matthew Harrison of Spinnin’ Records, the label behind the video. Harrison offered a mea culpa, though he seemed to believe the error was in not crediting Ng, and instead crediting the VJ Three Heads who had been hired to produce and edit the video. In an attempt to make amends, Harrison offered Ng a percentage of ad revenue for the video, which had surpassed a million views on Youtube.”

That offer was rejected by Ng, who maintained that the original music in the short was already a perfect fit, as it has been specially commissioned for the short itself. He filed a takedown notice with YouTube and the video was down by September 19. The video is still present on Sparks’ Facebook page, and is littered with comments from the past few days chastising Sparks for stealing an artist’s content. 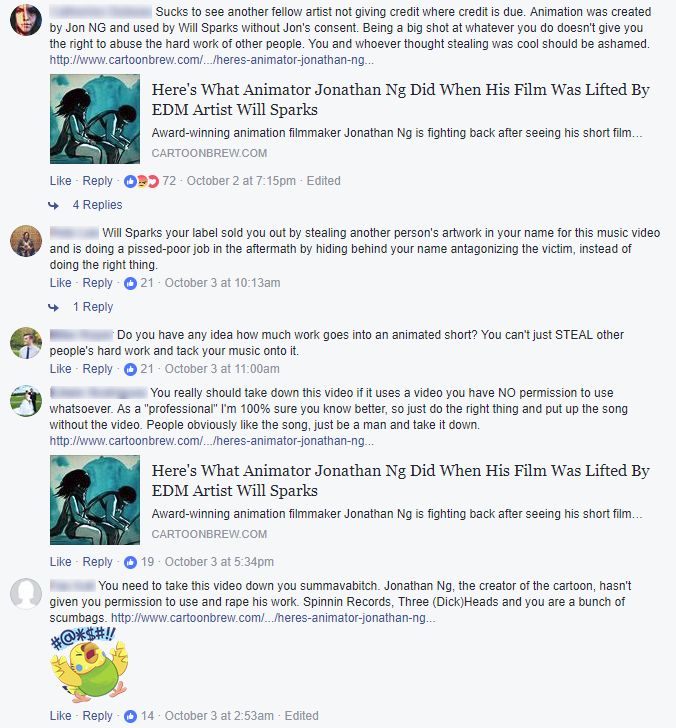 After this story originally appeared on Cartoon Brew, a Spinnin Records spokesperson issued this statement to the publication:

We contacted Jonathan asking multiple times after seeing remarks when the video originally went live and after about licensing and even splitting ad revenue with Jonathan. We are still open to this idea, as at this point our YouTube page has resulted in a loss in sales, marketing funds, and the ability to promote artist such as Will Sparks. We have also reached out to Jonathan to publish a redo or republish this version of “Take Me” on our page with the correct documentation including his credentials, as well as everyone else who worked on the project. At this point we have still yet to hear back from him. At this point we have begun reaching out to other animators, as well as Jonathan to hire them to make a new video and give credit where credit is due.

As far as your current article goes I would ask kindly to remove it or repost it on your page as it makes Will Sparks look bad when he is not involved in the process at all. This burden falls on our team at Spinnin’ for letting the ball drop and not contact Jonathan sooner before the video went live. We are currently backing down using Jonathan’s art, video and other medias from our socials and our website and are currently awaiting a new animator to tackle the process of creating new art.

We ask you to be patient with us as we are still waiting for answers on our side as well.