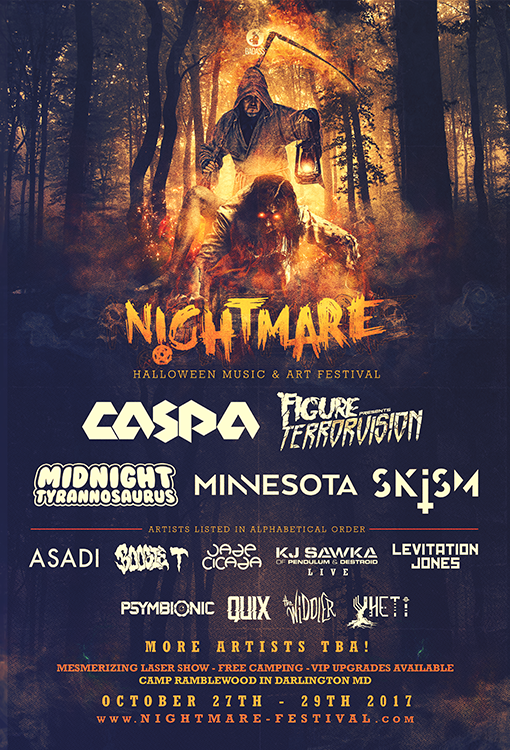 Nightmare Festival, the Northeast’s biggest two-day Halloween camping festival, has announced the lineup for its 2017 edition. Returning to the spooky Camp Ramblewood on October 27th and 28th for its fifth year, the festival will be headlined by artists like the legendary Caspa who’s coming off a spectacular performance at Bassnectar’s “Basslantic City,” Figure with his new & improved “Terrorvision” featuring video mixes of horror films, Midnight Tyrannosaurus, Minnesota, and the man behind Never Say Die Records, SKisM.

Joining the headliners are some of dance music’s most diabolical artists including Boogie T, KJ Sawka of Pendulum and Destroid, Quix, The Widdler, Yheti, and many more. This year’s lineup is full of cutting edge electronic dance music ranging from dubstep, trap, drum & bass and riddim to house, deep bass, and chillout.

Praised as one of the best Halloween festivals in the country, last year’s event brought together thousands in costume and was home to headliners including Figure, Crizzly, Liquid Stranger, Ganja White Knight, and more. Hosted each year by BADVSS RAVES, this year’s event promises to be the best yet with an insane lineup, multiple stages, elite Halloween decorations, cabins, music until 5 AM each morning, live actors, and the new Gradient Perspective lounge which will feature a variety of deep, soulful, funky, and melodic music with a loaded art gallery of visionary work.

This year, Your EDM is hosting a giveaway for one lucky winner who will receive a pair of weekend VIP tickets, valued at $360. These tickets include admission, 10am early arrival, festival lineup poster, commemorative wristband, festival hat pin, and festival T-shirt.

Enter below for your chance to win!