If you’re going to be buying drugs anywhere from anyone, a test kit is essential. But if you’re buying out of state, you might also need a thesaurus. According to a recent extensive report from the Drug Enforcement Administration (DEA), the slang used for the country’s most popular drugs varies wildly from state to state.

For instance, marijuana is sometimes referred to as simply “blunt” in Arkansas, New Jersey, and Connecticut. In Oregon and Ohio, it’s still referred to as “bud.” You get the picture.

ProjectKnow.com surveyed over 1,150 Americans to discover what slang terms they used. According to their methodology, “Thirty-six states had 20 or more respondents, 12 states had 11 to 19 respondents (Arkansas, Delaware, Hawaii, Iowa, Mississippi, Montana, New Hampshire, New Mexico, Rhode Island, South Dakota, Utah, and Vermont), and two states did not have enough respondents to be included (Alaska and North Dakota).”

Of course, more respondents would have likely yielded more accurate results (and in fact these results aren’t even entirely statistically significant), but it nonetheless provides a starting point and unique insight into American drug culture. 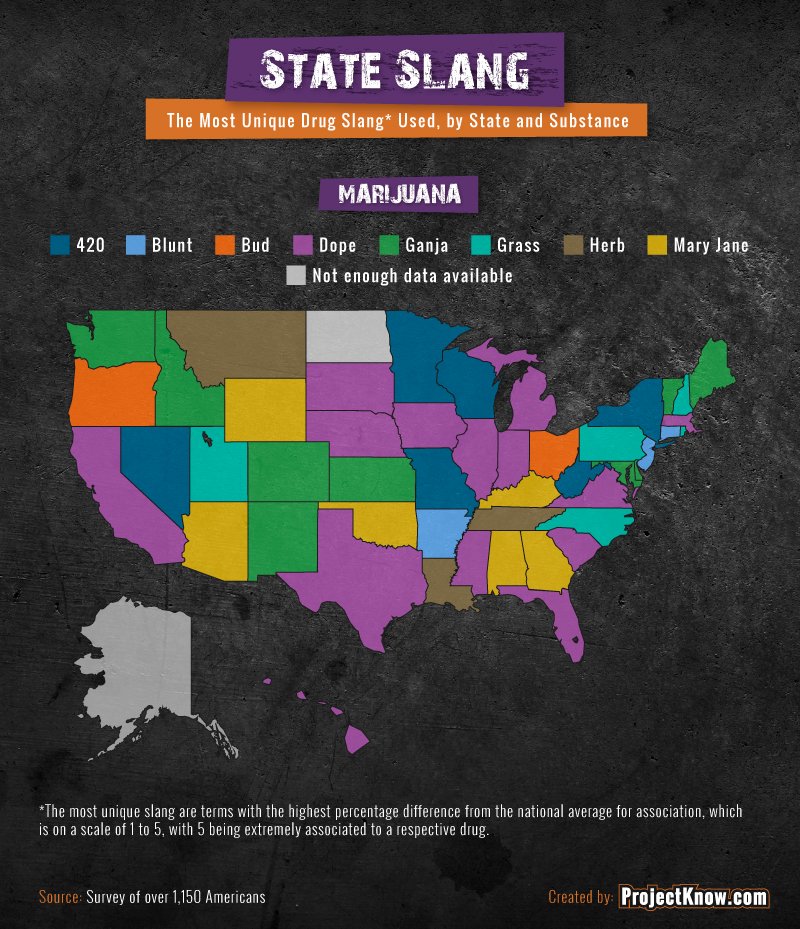 The results for the other drugs in the study, including popular party drugs like cocaine and MDMA, can be found below. Note: some of the results definitely seem inaccurate, and are likely a result of the small sample size found per state. If you disagree with the “most unique” slang used for your state, you’re likely not alone.