Trolls Go After Avicii’s Girlfriend, Apparently Blame Her For His Death

Avicii’s girlfriend, Czech model Tereza Kačerová, posted a heartbreaking open letter two weeks ago following the producer’s death, highlighting her time spent with Tim and his influence on her and her son. The letter exposed many aspects of Avicii’s life to his fans, much of which was unknown at the time; they’d kept their relationship quite private.

Yesterday, Kačerová took to Instagram for a different reason: to chastise some “hate-filled hearts (and a few legitimate sociopaths).” From her new post, it seems that some people attempted to contact her baby’s biological father, as well as her friends and co-stars, and turn them against her. To this, she replied, “Seek professional help.”

The rest of the letter explains her reasoning for releasing the first letter two weeks ago, as well as informs people that she’s turning comments off.

For people to attack Kačerová in her time of mourning is not only shameful, it’s absolutely reprehensible. It’s good that these people were called out, even if not by name.

The second part of her statement is still up on Instagram; it’s unclear what happened to the first, but you can see a screengrab of it below, as well. 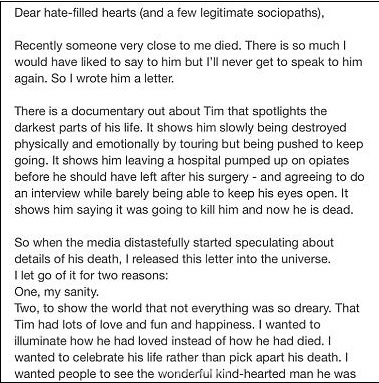 Rezz Announces Her Next Album Is Done