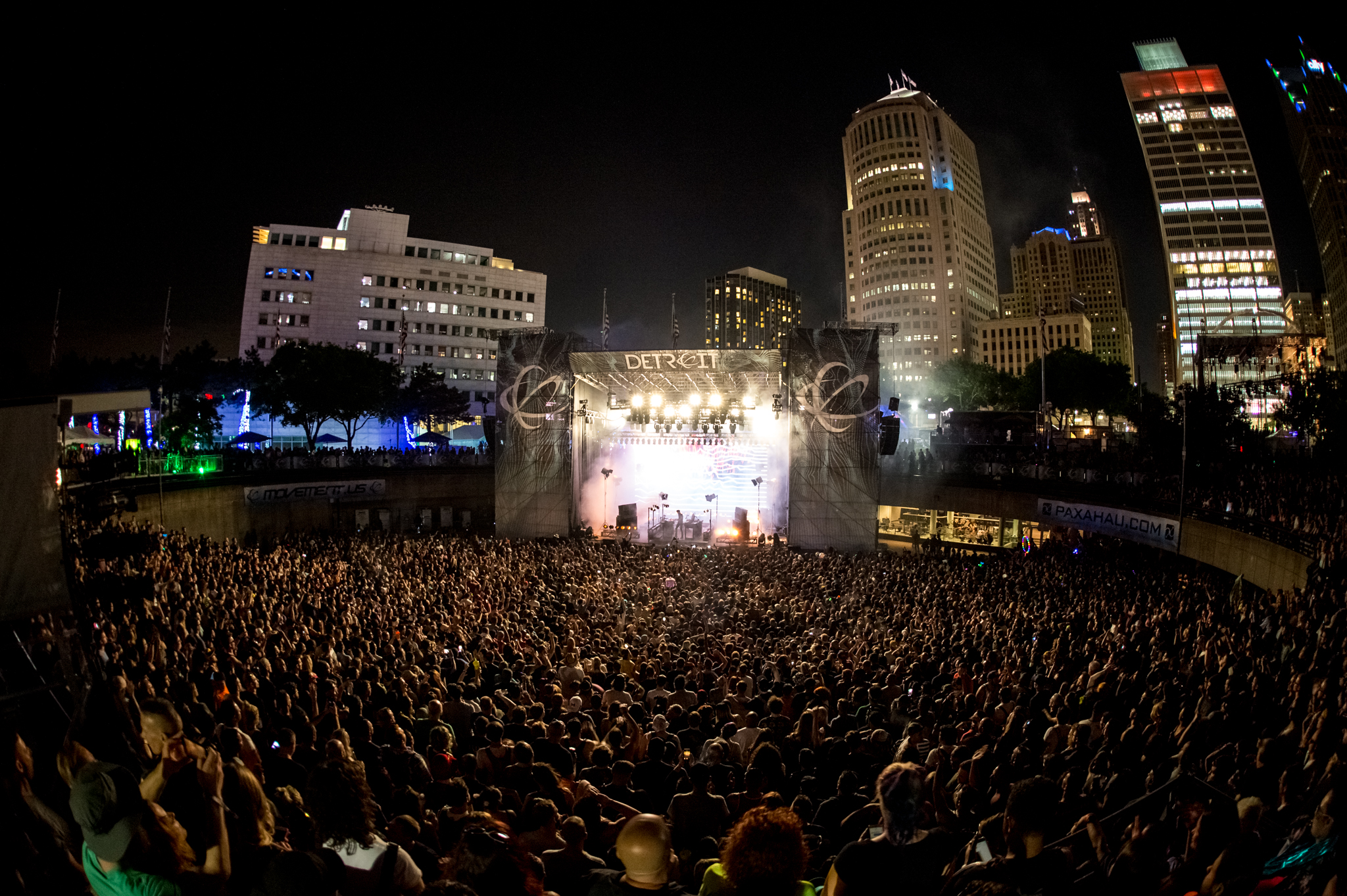 When it comes to techno, Movement Detroit is the Mecca of all music festivals. This weekend, music fans from all over the world will gather in the concrete jungle to hear the pounding heartbeat of techno in the city that made it. But, the real party doesn’t start until the afterparty (or, better yet, afterparties).

As we gear up for Movement Music Festival over May 26 – 28, it’s vital to map out our afterparty plans. Not because we don’t like being spontaneous, but because these events will most definitely sell out.

There are a slew of official Movement afterparties including Paxhau Presents: House of E-Funk and OK Cool at TV Lounge, Dirtybird Players at The Masonic Temple, and Repopulate Mars and Detroit Love‘s official after party at the Magic Stick. There’s plenty of opportunity to catch afterhours sets from Claude VonStroke, Soul Clap and Nina Kravitz, just to name a few — all weekend long.

View all of Movement Detroit’s official afterparty events here and even more options via RA here. Plus, if you want to boogie down with us, check out the staff picks below from myself and Georgia Modi, who will be covering the festival along with me this year!

Blank Code System Communion at The Works
Having to pick between this party and Modern Cathedrals is almost like asking a parent who their favorite kid is. Both events have a stellar lineup of artists and both serve as amazing ways to kick of your Movement weekend. Something that is special about this lineup is the fact that almost all the names on it are from the US, with the exception of Dustin Zhan. We often see a slew of European artists taking over the more techno-leaning parties, not like that is a bad thing it is nice to see talent represented all over the world.

Wongo & OMNOM at Grasshopper Underground
If you want to go against the grain, check out Wongo and Omnom — and trust that this one is going to get weird. These Box of Cats artists are sure to keep your booty shaking at the Grasshopper as they pump out quirky house music and underground sounds all night long. Friday evening holds a lot of afterparty options, but nothing quite like this. Trust.

Modern Cathedrals pres. Eden IV at Tangent Gallery
Modern Cathedrals is yet another party with yet another fantastic lineup. This event has four live acts performing, one of them being Headless Horseman. Not only did he destroy the underground stage last year but he played another phenomenal show in Chicago back in October, too. He has always been a consistent performer and a true treat to catch. Honestly though, everyone at this party would be a treat to be able to catch and that’s what makes it so hard to choose Friday night plans. At least take solace in the fact that you will have an amazing time with whichever party you choose to attend.

Dirtybird Official Movement Afterparty at The Masonic Temple
Oh man, the opening night of Movement Detroit is a cluster of excellent afterhours choices, which is why we’re including so many here. The Dirtybird Players afterparty is a guaranteed sellout and will be an unmissable event for many Movement attendees. You already know the man Claude VonStroke and big names like Justin Martin and Fisher will be there to throw down at The Masonic Temple. Speaking of which, this party takes place at one of the most iconic venues in the D — so how could you miss it?!

Tresor.313 at Tangent Gallery
Tresor is nothing short of a major staple in the Berlin nightlife scene and they have continued to keep a steady, important connection to the midwest as they bring back their party for Movement. For three years Tresor has sought out to showcase something special in the city of Detroit and they have been able to do that with the help of Interdimensional Transmissions, a Detroit record label. Not only is Tresor.313 a destination spot for your Saturday night, the venue that it is being hosted at is one you may just want to live in for the whole weekend. Interdimensional Transmissions has created something unique, almost its own adjunct mini festival. Not only do you have Tresor.313 on Saturday but you have No Way Back on Sunday and 15 Years of The Bunker on Monday, a true onslaught of music.

Evolve 2018: Mord Showcase at The Works
One of the first afterparties to get announced a few months ago, the Mord Showcase has not lost any steam. With the underground sounds of Bas Mooy, Ansome (Live), and UVB taking over the headlining spots, anyone who attends this will be able to fully experience the talent that is on this record label. Overall, the Mord Showcase is a well-rounded and beautifully curated event with the balance of European techno names alongside those from the states.

Country Club Disco Warehouse After Party w/ Chris Lake, Justin Jay, Yotto & more at The Russell
This is the main event all weekend long for Country Club Disco, a Detroit-based label run by Movement fan favorites Golf Clap! The sounds of Chris Lake, Justin Jay, Yotto, Cut Snake and Dillon Nathaniel will be the soundtrack to the night as they rock out at The Russell Industrial Center, an ideal space for throwing a killer Detroit party. Just last week, Hot Since 82 & Pete Tong threw down there in collaboration with this same label  — so let’s just say, they know how to throw a party. This is one afterhours events we’re most looking forward to this weekend!

Interface Scene at The Works
Droid Recordings and Blank Code come together for yet another year of their renowned Sunday night party, Interface. This party has always been a hub for the more industrial, heavy side of techno with many artists coming in from overseas (particularly from Berlin). Last year Luis Flores delivered an incredible set and this year he is back showcasing his project I Murdered with Janice. Not only will that performance be something new to explore, we still have the pleasure of not knowing one of the performing acts, that’ll probably only get revealed the night of too.

KMS Origins Official Movement After Party at The Magic Stick
KMS Origins is another official afterparty you don’t want to miss, with some homegrown Detroit talent. Expect amazing sets from The Saunderson Brothers, Octave One and Kevin Saunderson b2b Kink, just to name a few as the party pops off in the main room and on the patio. This is another Movement official afterparty, so expect nothing but the best with some of the realest Detroit techno out there.

Country Club Disco w/ Codes, Dillon Nathaniel & more at The Works
Ready for round 2 with Country Club Disco? This lineup is practically a mini-music festival in itself. The totally stacked roster boasts names like Codes, Dillon Nathaniel, Eyes Everywhere, GRECO, Lee K, option4, Proper Villains, and local support from Attak, Sonya Alvarez, Wattie Green, Andrew Parsons and Devon James. Don’t rule out surprise guests because wherever there’s a Country Club Disco going down, you can expect the unexpected. This label has afters on back-to-back nights, Sunday and Monday — but, there’s a nice change of scenery as the party moves from The Russell to The Works to close out the festival properly.

Where are my Keys at Marble Bar
For the last 12 years so many of us have been able to keep the party going from Sunday night well into Monday with the famed Need I Say More party, also known as Old Miami. However, in 2018 it was time to say goodbye to this backyard hangout and while many were understandably heartbroken they weren’t left completely empty handed. Where are my Keys is the perfect alternative to fill the earlier hours of your day. Starting at 9am, this party actually kicks off two hours later than Old Miami did, maybe you can finally squeeze a nap in? Don’t think you have to get there right at 9am, Where Are My Key’s not only starts early but it goes late too, all the way until 4am Tuesday Morning to be exact. So, buckle up for a wild, long ride with some of the best house music you’ll be able to catch that weekend.

Staub at TV Lounge
What makes Staub so enticing is that, well, there is no lineup yet and we probably wont figure out what it is until day of. We do; however, get a few hints about the direction the party is headed by its event page description and the blurb that Resident Advisor wrote when it selected Staub as one of its top picks.

“Don’t expect a lineup to be posted in advance, but it’s a safe bet that this beloved Berlin-based techno party will go off with a bang when it hits Detroit during Movement.” – RA

The event’s description reads: “STAUB is based on the belief that a certain form of techno is neglected. It is convicted in the omnipotence of the music, and the disinterested play of an artist. It does not lead to the destruction of another party mechanism nor to its substitution, but it can be a solution for the principal problems of life. It does not matter whether you are a newcomer or Lady Gaga, what matters is the quality of the music!”

There’s no wrong answer when it comes to Movement afterparties — as long as you’re up all night! 😉