Governors Ball 2018: What You Need To Know

New York City’s Governors Ball kicks off in just over a week, where tens of thousands of music lovers and festival goers will flock to Randall’s Island, wedged between the Harlem and East river. In its eighth consecutive year, the festival continues its tradition of booking some of the best names in music, but not forgetting some lesser known and up and coming acts to grace the stages.

And while the lineup is as eclectic as New York City itself, EDM fans can rest assured there are many electronic acts performing, including The Glitch Mob who will undoubtedly play tracks off of their latest album release See Without Eyes; other acts include Galantis, Flight Facilities, Two Feet, Cut Copy, and the highly anticipated Silk City, consisting of longtime friends Diplo and Mark Ronson, in their first-ever (official) festival appearance.

In addition to a well curated EDM lineup, the festival boasts a heavy hitting rap and hip-hop ensemble with Eminem headlining Sunday night, Travis Scott closing out one of the main stages Saturday night, and other performers among them: Post Malone, DRAM, 2Chainz, Khalid, Aminé, Goldlink and many more throughout the three-day event. 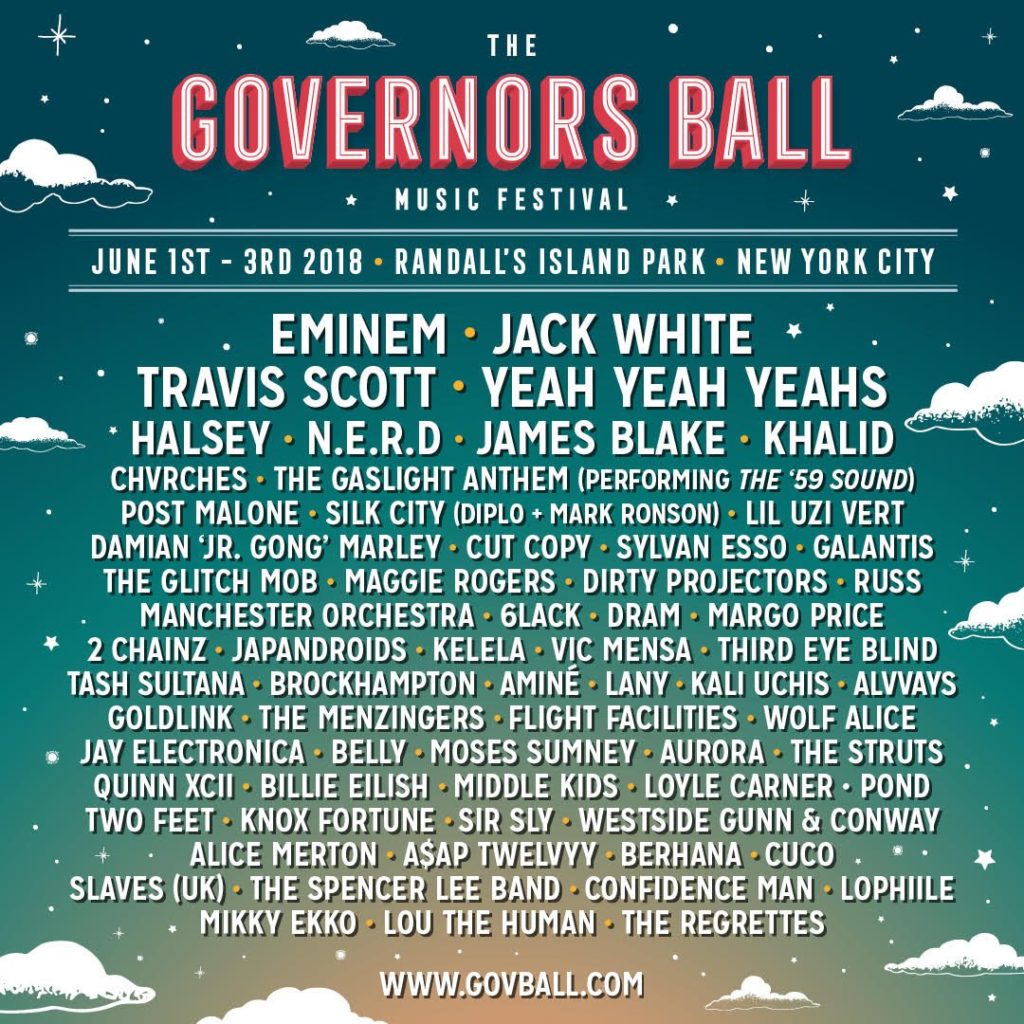 The gates open at 11:45am each day of the festival with music starting 12:15pm, Friday-Sunday. The music is unfortunately capped each night at 11pm, but if you want to keep the party going, Governors Ball has teamed up with local venues to book acts on the lineup for late night shows, starting after the festival grounds close. Some notable late night shows in the electronic realm include The Glitch Mob (Friday, June 1 at Schimanski), Flight Facilities (Friday, June 1 at Output), and Galantis (Saturday, June 2nd at Schimanski). Tickets are sold separately, and some have already sold out, so get your tickets to these shows quick! (Link) 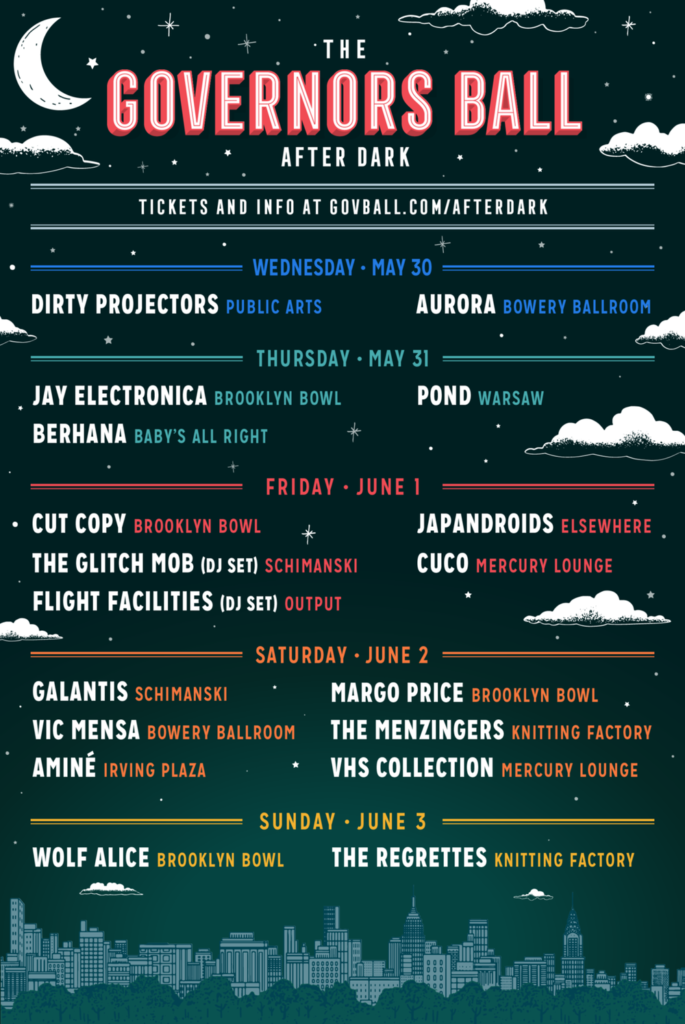 And what would a music festival be without food options? Just as you can get some of the best food in New York City, the same can be said for Gov Ball. This is a category Gov Ball does not skimp out on by any means. Heck, they’ve even gone as far as to have their own food lineup poster, which you can peep below. 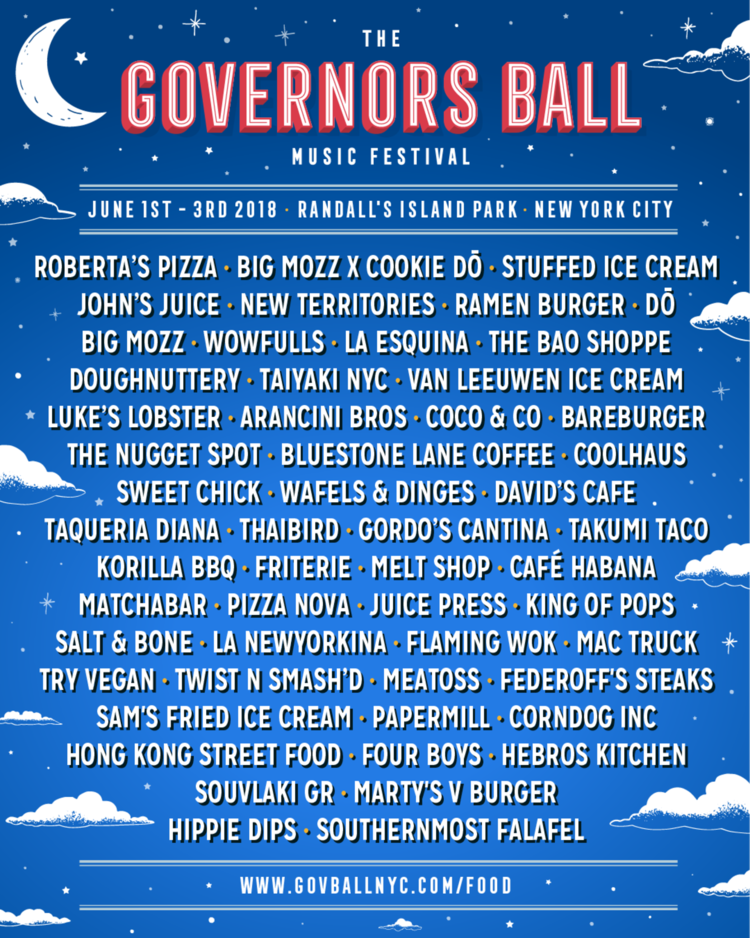 Tickets have sold out in the past, so if you haven’t already purchased your ticket, avoid the scalpers and online scams by purchasing your ticket direct from the website here.

And if you just cant wait to get to Randall’s Island, check out Gov Ball’s own curated Spotify playlist with almost 200 tracks from this year’s artists.

After the festival, stay tuned for a full recap from Your EDM with photo albums to follow.

Photographer and Videographer for YourEDM based out of Atlanta, GA. You can find me at the Atlanta EDM shows behind the camera!