by Your EDM Staff
in Just For Fun, Worth Sharing

The United States was celebrating our Independence Day, the Fourth of July, yesterday, so naturally all work came to a screeching halt and half the country drank copious amounts of alcohol. While we’d all like to think we’re better than our id, even the best of us aren’t immune.

Skrillex, while usually fairly well composed on social media, managed to send out a rather “WTF” tweet last night that certainly reads like he was inebriated. His Instagram story earlier in the day showed him partying with Post Malone, so we wouldn’t be surprised if that was the case, though there’s no explicit evidence pointing to that. 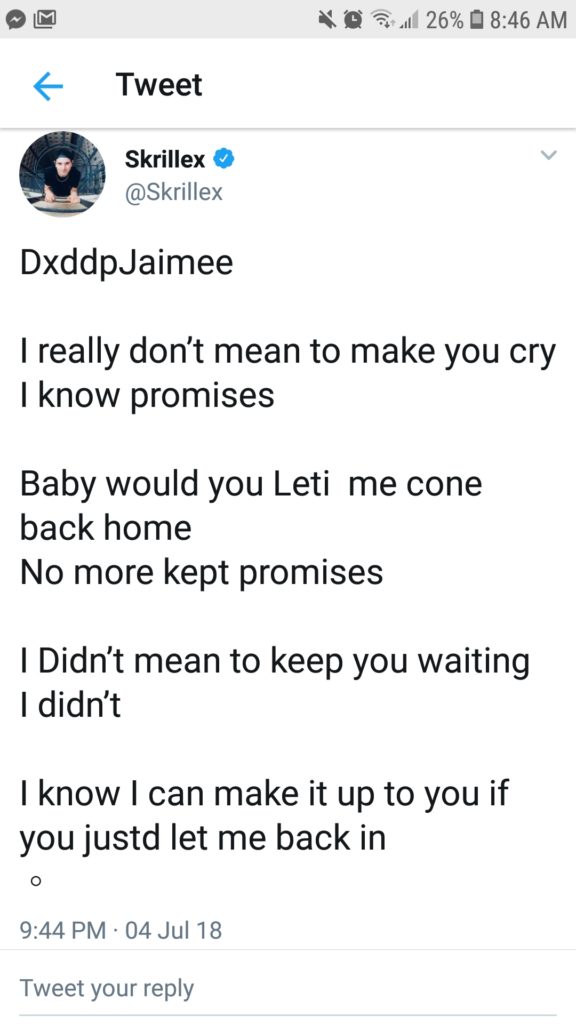 The tweet definitely reads like a drunk apology to a girl named Jaimee, whom some fans have claimed is Skrillex’s current girlfriend.

If that’s the case, it seems like Skrillex might have been kicked out for the night – though, again, there’s no evidence other than the tweet to back that claim up.

On the other hand, some users on Twitter and Reddit have suggested that the tweet might be lyrics to a forthcoming From First To Last song called “Surrender.” But we’ve heard that song, and we don’t think that’s the right conclusion…

Whatever the tweet was about, we hope Skrillex is okay and can just brush it off. It wasn’t so long ago that he was tweeting about needing time “to be human” again.

James Blake Speaks Up About Mental Health In The Music Industry

James Blake Speaks Up About Mental Health In The Music Industry